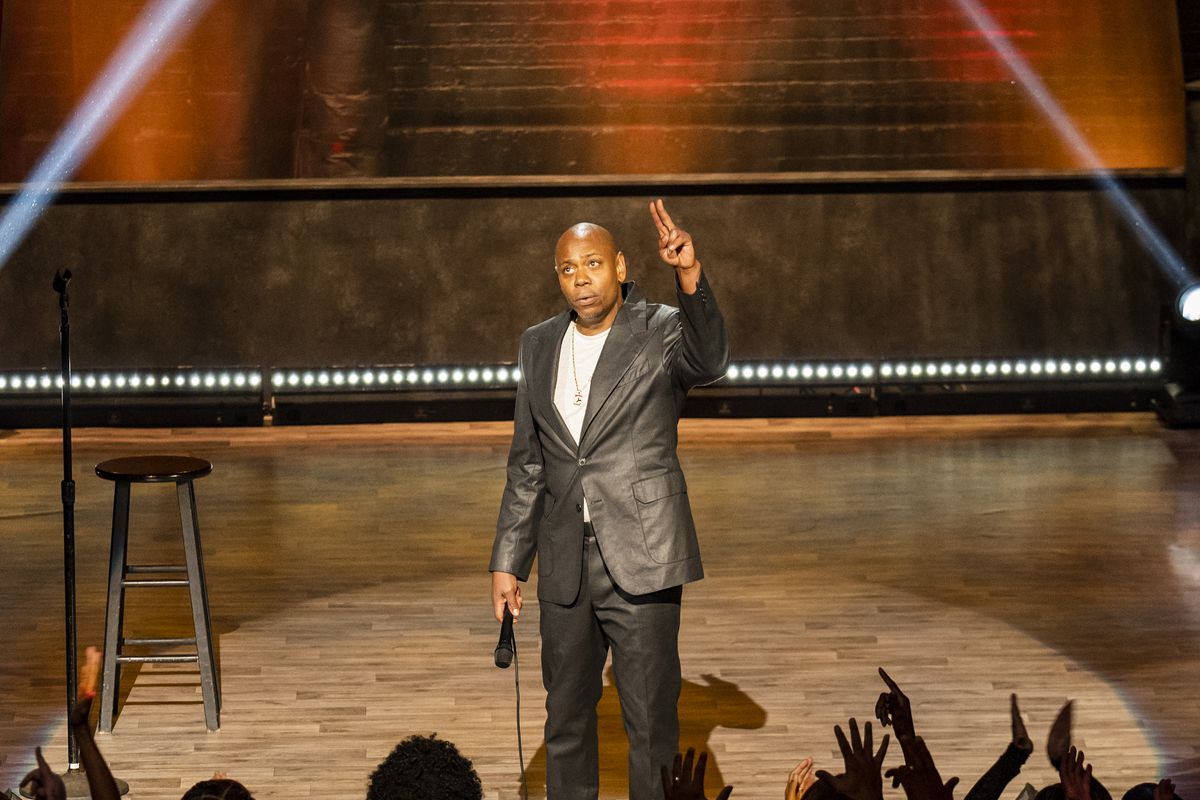 You do not need to watch Dave Chappelle’s most recent NETFLIX comedy special to read this piece. I’m not asking you to watch. I’m not defending him. I’m not even discussing his work on the whole, I’m discussing how to handle the 4th wall break he has mid-show – this is a message for artists in similar situations.

I am not going to defend Dave Chappelle. 16 years ago he discovered he was transphobic and hasn’t defended himself exactly, but dug up and displayed his nuanced perspective on the power the Black community cannot access whereas the LGBTQ community can – in their white population. He also cuts down and insults Trans people in a variety of bits. His real-world damage and consequences will never truly be resolved in a way that is satisfying to the people he has hurt, but he’s officially put down his mic on the subject (at least that’s what he said in this latest special) ending this chapter with an emotional, tears in his eyes, plea for the LGBTQ community to not ‘punch down’ at Black people (calling back to how he has often been accused at ‘punching down’ at the Trans community).

I’m not equipped, I’m not the person who needs to discuss his transphobia. This special is damaging, NETFLIX is handling it poorly, anti-Trans comedy is not good comedy. Although, Dave Chappelle is exploring white supremacy in his latest special – he tries desperately to point this out over and over. But I’m not weighing in on the overall way “The Closer” plays out in actual performance. I am speaking to the artists in my life who are considering how their work may be received involving communities they are not apart of – in conjunction with the subject they want to explore and are known for exploring.

Again, you do not need to watch his special to read this.

Should I Stay “In My Lane” To Avoid Controversy?

I have a message for artists, filmmakers, and people looking to discuss ANY nuance of a touchy subject, controversial issue, traditionally oppressed peoples, or underrepresented community: Address Your Demons.

Why Did I Watch this Controversial Special?

I am a lifelong fan of Dave Chappelle and I watch almost all stand-up comedy specials, I’ve written about this many many many times. I’m not making space for Dave Chappelle anymore, I make space for stand-up comedy. And he is a part of stand-up comedy. And I watch whatever the F*** I want, I’m a grown-up and have discernment on my side from years of watching and enjoying misogynistic, homophobic, and racist humor put out by the most powerful comics of the last few decades. And I grew up to discover one of my favorite all-time comedians was drugging and raping women for YEARS, so I can consume a content warning and move forward and still enjoy comedy. That’s just me. Not asking you to do that, too. Let’s move on:

The moment I want to point out and dissect is in the set-up for a barely nuanced bit when Chappelle brings up “the bathroom bill” to tear down it’s legitimacy. An audience member yells out their support of this anti-trans bill, we cannot understand this shout out from afar, but we see on Chappelle’s face exactly the information we need – their personal transphobia on display. Even though Chappelle is going to make transphobic and inappropriate bits throughout the rest of his performance (in support of humanizing and caring for trans people in his own way *eye roll*), Chappelle looks up at that person and immediately breaks character and reprimands them. His audience IS his audience. Chappelle knows he is talking to a group of people absolutely unbothered by his performance-based transphobia – People who likely share his transphobia by any margin. And yet, this is an important take away: In the moment, any non-prepared and non-performance-based anti-trans rhetoric MUST be squashed. Chappelle steps out of the bit to be clear that their opinion is damaging …and then goes immediately back into his prepared bit.

No matter who you are, no matter what you have to say, no matter what you have prepared, no matter what nuance you need to dissect and address for your own purposes, no matter how damaging and backwards and stunted the performance – when someone in the audience breaks the 4th wall to say hideous things about the group YOU are cutting down, you should not let that go. You must not let that go. The entire entertainment industry will stand behind any awful and hideous rhetoric coming from a stage, performance art such as stand-up is not a TED Talk, is not an academic setting, and as Chappelle addresses in his act – is not a reflection of the person performing. But Chappelle IS touting his opinion like it’s fact, since he says so … in his act. He is a public figure with a great deal of power. When someone yells transphobia in his direction, he squashes it. When it comes from his act, he lets it go.

Bring Up Hard Subjects, Be Wrong, But Be Responsible

At the very least, when you want to dig up and make disruptive proclamations, you need to shut down the rhetoric you cause in your fan base. Address Your Demons. You made them, you address them. No matter how rough you wanna get in your messy yucky human art, be clear that performance and personal opinions are different. We all have differing levels of media literacy, show your media literacy cards whenever you get the chance.

If you are writing a piece about suicide, make sure to personally prepare how to point struggling people to support. If you want to bring up how vaccine mandates spark a dangerous bodily autonomy issue in performance, personally address that your audience should be considering facts about whether or not to vaccinate and not anti-science rhetoric. When you want to discuss your internalized white supremacy in performance, be sure to personally clarify systemic structures need to be changed. If rape is ANYWHERE near your stand-up set, then be sure you are personally talking to your friends about their understanding of consent. When your sexism and misogyny make for a great joke in performance, personally lean in to feminist causes and support them publicly. When you are not able to set aside your transphobia in performance, you must personally combat anti-trans violence and aggression in your fanbase. When you experiment on stage or in your creative work, personally dig deeper on that subject so that you are equipped to point to the right resources.

If you want to broadcast that you are unable to meet the needs of a community outside of yourself in your journey to a more just and equitable society, be clear that you know it is only half-way. Be vulnerable in your creative work and then point to it and allow yourself to be honest where it can be misinterpreted as non-performance activism. You can let your art speak for itself. You can. But don’t.

There are books upon books about individual subjects, this is a wide comb to catch ideas across a broad section of topics. When claiming or portraying or exploring potentially damaging or controversial subjects: