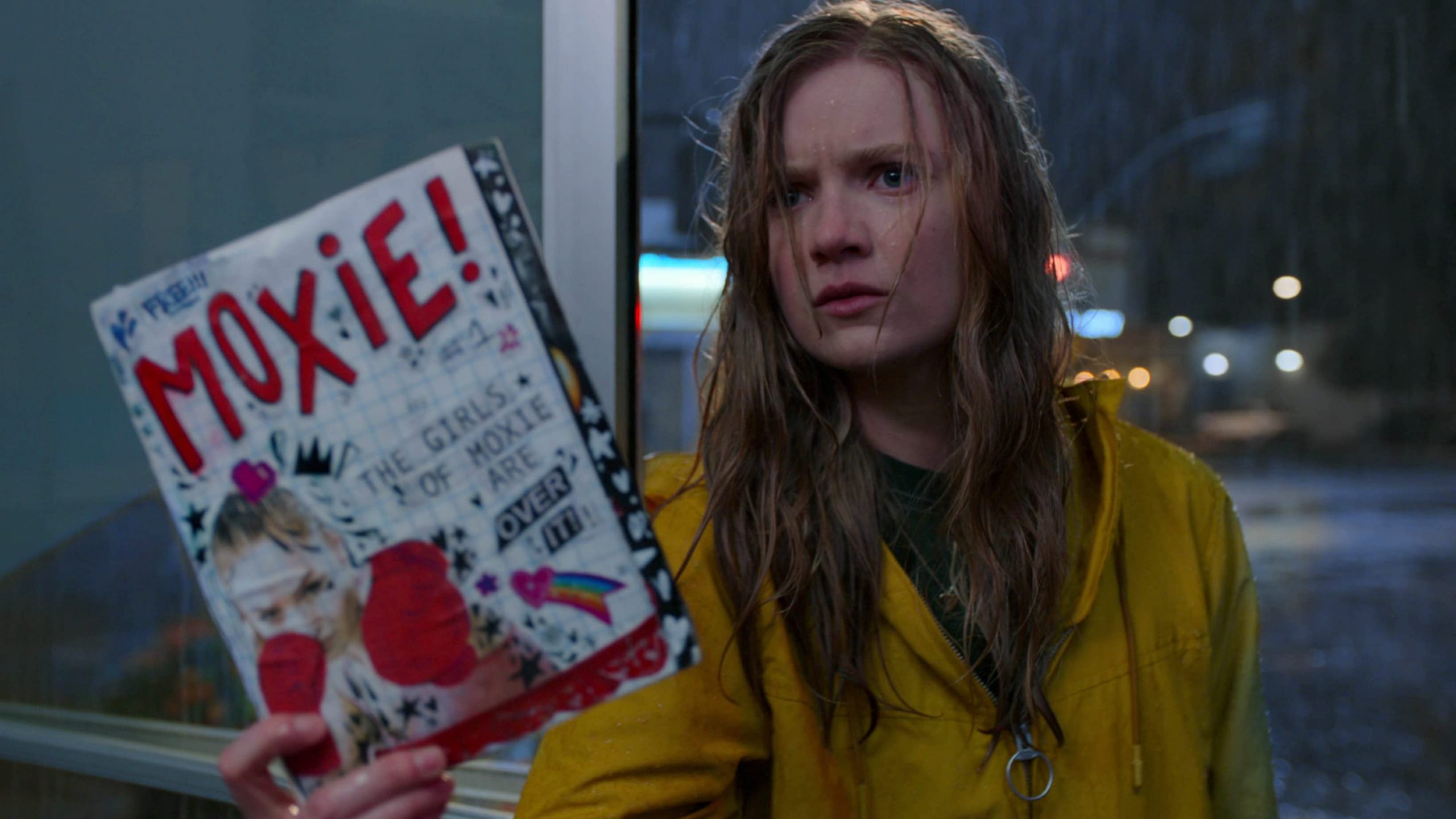 And I’m ALL FOR IT! Hells yeah, they went for it.

Director Amy Poehler (Parks and Recreation, Wine Country) released MOXIE on Netflix based on a novel by Jennifer Mathieu and written by Tamara Chestna (After) and Dylan Meyer (Miss 2059, XOXO). This prescriptive series on starting a high school revolution stars Hadley Robinson (Little Women, Fosse/Verdon)’s “Vivian.” And she’s just marvelous in it.

I fell in love with Vivian and her best friend, Lauren Tsai (Legion)’s “Claudia,” pretty quickly. This isn’t your wacky teenage romp like Mean Girls , this is a realistic and angsty awakening to issues that matter to high schoolers today JUST as they mattered to every generation before them: Inequality and the systems that protect those injustices.

Actually the main character of this movie is Alycia Pascual-Pena (Saved by the Bell, Chase)’s “Lucy” – but we are watching Vivian ‘wake up’ to the way that Lucy walks around in the world. Lucy is taunted and assaulted and harassed by toxic jock leader Patrick Schwarzenegger (Daniel Isn’t Real, Midnight Sun)’s “Mitchell.” Vivian takes the step of showing solidarity to new school attendee Lucy and offering her ‘advice’ on how to react to male harassment, given that their school is filled with horrific sexist injustices that seem extremely familiar and absolutely truthful to me (I attended high school in Southern California in the early 2000’s and this seems absolutely on par with my experience, which is disgusting that nothing has changed).

The rest of the film is a how-to in disruption and trusting Black women’s experience and finding ways to embolden one another to explore how each of us can move the needle. We all have a part to play. Including the complexities of men participating in women’s equality issues, the Asian-American 2nd generation cultural obstacles, and finding ways to come together between 3rd wave and 4th wave feminists (the latter featuring internet tools and intersectionality). This film doesn’t back down from pulling school administration, including teachers, into the fray. Silence is complicity and once our antagonist is named “VIOLENT” by our leading Woman of Color, it’s on us what we do next.

I’m gonna use some not-so-great trope names just to give some flair to the descriptions, I do not mean to tear down what a fabulous ensemble this is: Hot Ally Nico Hiraga (Booksmart, Summer of 17)’s “Seth” gives us probably our most high-school-kid vibe of the film, our agreeable male friend who grew up to have confidence in his own boundaries as well as security in supporting women 1,000% without prompting. He is kind-hearted and our favorite person in every scene. Tank top girl Sabrina Haskett (Deidra & Laney Rob a Train, Happy Hazel)’s “Kaitlynn“is sent home for wearing clothes while female, I have *also* been a violator of wearing clothes while female as I saw many many a young woman receive the message that wearing clothes while female is inappropriate in some schools, however, once she is emboldened by solidarity, she won’t allow herself to be shamed for …wearing clothes while female. The jock without leadership ambition Sydney Park (The Walking Dead, Pretty Little Liars: The Perfectionists)’s “Kiera” is given permission (by Lucy and the gang) to believe in herself and goes through a public crushing defeat, having been enriched as well as radicalized by the experience. She endures a lot. Ms. Park is stellar in her incredible journey even if it’s treated like she’s playing a small role, of which she is not. Organizer, rallying friend, and comic relief Anjelika Washington (Tall Girl, Young Sheldon)’s “Amaya” moves the energy in every situation, delivering hidden truths with sparkling personality.

Overall, this movie gave me all the feels and nostalgia of walking out and protesting injustices in my youth. We need a movie to give a solid how-to in disruption that is sneaky enough to be mainstream.