An Oscar Worthy Monument To Elizabeth Taylor’s Command And Courage 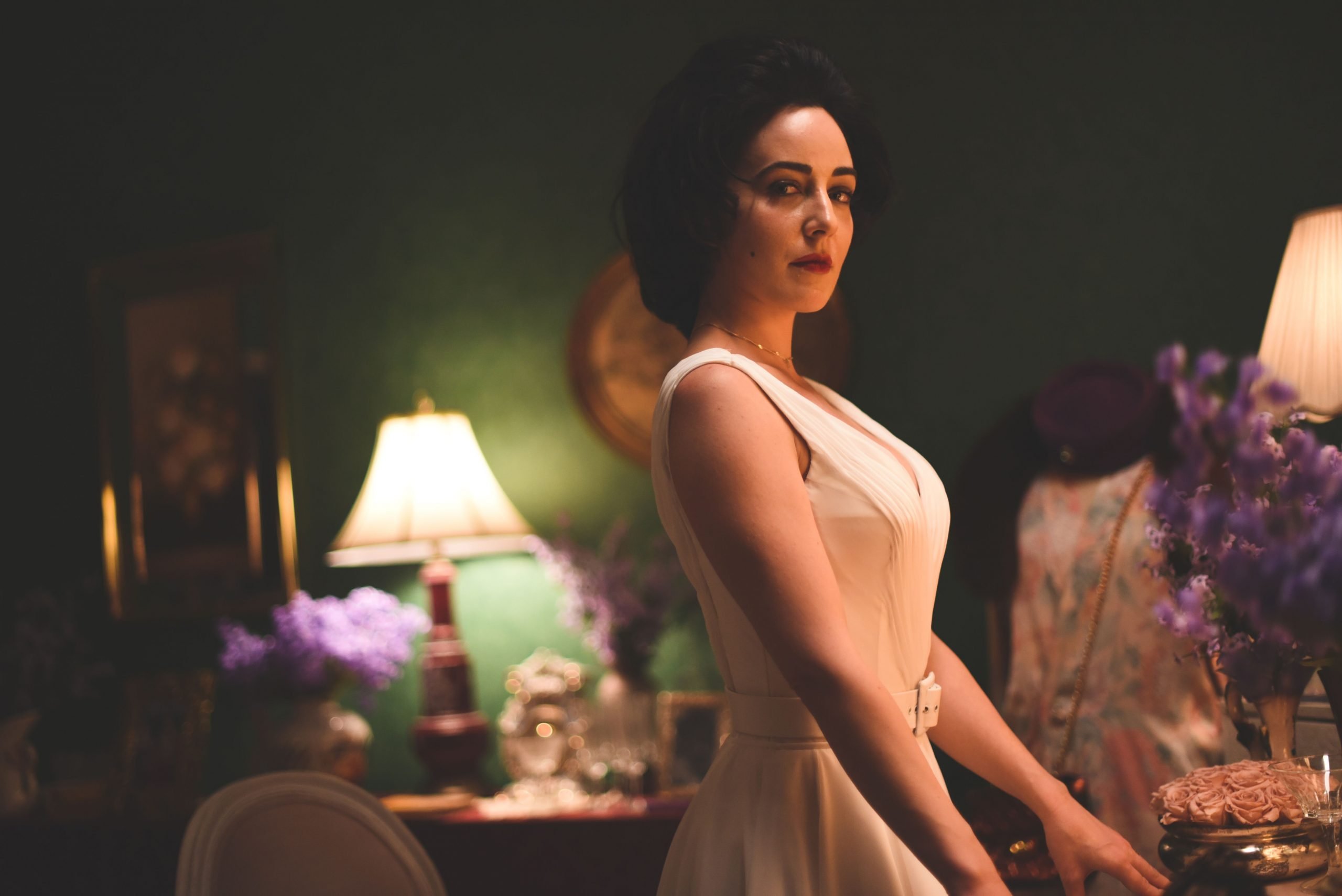 A review of DAME, a lost and grieving Elizabeth Taylor returns to work after the tragic death of Mike Todd and courageously delivers one of the greatest performances of her life.

Actress Grace Kendall is quietly electric. Instantly, we are entranced by her intensity. Visually pulling back, the stark period-authentic sets transport us. I’m halfway in my memory of this iconic film set and halfway in the present, as if to be invited behind a private curtain to the golden age of Hollywood. Actress Grace Kendall has completely hypnotized me in her trance, I’m suddenly watching Elizabeth Taylor discreetly discover something unknown to us. She is suddenly lost without the strength to stand. Slowly, she is released to escape into her dressing room. I was struck by the imaginative use of light and the subtle support it brought to her almost entirely internal quest for … something. Something important.

Alone in the ornate and richly textured dressing room, some magical place that only Elizabeth Taylor’s spirit could seek solace, we watch Taylor in agony. Her deliberate and brimming energy spills onto the floor. Her desperate whimper reeks of new grief. New, raw, trapped, unwelcome, rarely released internal screams that have been present in her eyes the entirety of the piece thus far. Yet, the camera loves her. Every minute. Taylor lives here.

As Elizabeth Taylor finds her previously lost relic imbued with the entirety her strength to stand again, she blazes her way back to her throne where she commands every inch of the room. She is a monarch. Grace Kendall takes Taylor on a last hurrah into the work and invents a time machine before our very eyes. Grace Kendall is subtle, yet striking. A breakout performance. This project of great love feels unreal.

Actress Grace Kendall: “I wrote about Elizabeth Taylor’s life because I was inspired by Elizabeth’s courage in the face of tragedy and her determination to get back up and map her career on her own terms, despite the challenges of being a woman in the male-dominated studio system of Hollywood in the 1950s. I feel that the media has grossly misrepresented Elizabeth Taylor’s story and my goal is to help shine light on who she was as a woman and a world leader. Producing, writing, and then portraying Elizabeth Taylor in DAME has been the most challenging and rewarding journey of my life and certainly the highlight of my career so far and I’m thrilled for what’s ahead!”

The camera seamlessly keeps us connected throughout close encounters with screaming eyes and walking between the false magic of sets and the garden of solace. The adjustments between the harsh lights of the sound stage and the soft glow of the dressing room pulls us into greater intimacy. The use of music to support a modern retelling is a surprisingly welcome layer that elevates the work beyond a historical appreciation piece. The point of view is strong. It’s incredibly painful to experience, so much so that I immediately watched it a second time, desiring the right kind of emotional ‘coaster that makes us feel alive. This retelling of a historic moment is invigorating. An undiscovered gem of the Oscar race. And the first Elizabeth Taylor biopic to ever qualify for consideration. After last year’s JUDY win, I think it’s Elizabeth Taylor’s turn.

Director Foster Wilson: “DAME  is a short film that is making the festival rounds now. It’s the untold story of a moment in Elizabeth Taylor’s life, when she was filming Cat on a Hot Tin Roof  in 1958. It’s about a woman rising up out of the depths of grief to stand in her own power against the studio system of the 1950s. I was so grateful to work with the incredible female-powered team that brought this film to life, and which has now won Best Actress at the Chelsea Film Festival, the Audience Award at Twin Cities Film Festival, and the Jury Award at Key West Film Festival. And we just learned that DAME has qualified for the 2021 Oscars so we are truly beside ourselves with excitement!”

I had already fallen in love with Director Foster Wilson‘s work before I requested this screener. I had seen her previous award-winning shorts WAFFLES and MADE PUBLIC, both with robust festival runs and online releases. WAFFLES was a surprising treat begging us to consider our impact on others and whether or not to stand up for what we believe. Wilson never wastes a moment of screen time, her pacing is perfection, strategized for the most impact effortlessly. Inside Out LGBT Film Festival called WAFFLES, “…a laugh out loud call to action that takes a good hard look at the complicated times we live in and lets us have a moment of fun with it. This film is exactly what we all need right now.”

MADE PUBLIC had an equally deep dive with a comedic twist, it “explores the impulse to share our most intimate thoughts and sacred moments with the general public – and how much we’re willing to lose to obtain the approval of strangers” (source). MADE PUBLIC reminded me that the thing I love about Wilson’s work is re-watching it. There are layers upon layers that make for an equally enjoyable repeat viewing. She trusts her audiences to move with her and builds an entire feature’s emotional journey into a simple narrative.

Director Foster Wilson moved into directing in 2015, she directed her first of many short films with Detroit Street Films, then built out a body of work from there. Together with her husband, writer Brian Leahy, they then co-founded Something Wilde Productions where they made those two shorts that caught my attention. I tend to seek out films directly from film festival directors and other stand-out pieces that indicate a filmmaker to watch who’ll keep putting out unique pieces. In 2019, Wilson was accepted into the Ryan Murphy HALF Initiative as a television directing mentee. Her work on DAME proves that she can masterfully command the ship carrying the weight and iconic significance of the late great Elizabeth Taylor with ease.

Director Foster Wilson is kind and energetic in person. she has fiery red hair, tons of up-to-date info on all the happenings in her city, and can talk for hours. I’ve had the pleasure of spending time asking her about her work and hearing all about DAME as the project was coming about. She praised Actress and Writer Grace Kendall for the work on DAME. Inviting Wilson to direct DAME showcases Kendall’s genius even more. This team has done something spectacular and yet have been unable to physically travel the country as this film collected accolades. It was an extra difficult year to showcase this kind of work.

Director Foster Wilson: “I think it’s easy to see 2020 as a standstill professionally, as it has quite literally brought a halt to the career progression of so many women (and some men) who are now at home with their children full-time due to school closures and COVID safety. As a mother of two young girls, I know this reality well. That said, I have personally found myself more grounded when I am putting my energy and the skills I have as a director/producer into grassroots organizing, community building, and activism. This year has put a finer point on what is important to both me and the world around me, and although the medium of film is much harder to pull off these days, the social change that I want to see can be achieved perhaps even more directly in local organizations and politics. It just isn’t, perhaps, quite as cinematic.”

Actress Grace Kendall: “2020 was a challenging year, to say the least, and despite this I believe it’s also been a year of opportunity to deeply evaluate our own lives and also how we interact and treat each other collectively as humans. I’ve personally had a year of immense growth, both professionally and personally, and I am very grateful for that. With the release of DAME on the festival circuit many of my lifelong dreams came true when we won Best Actress, the Audience Award and then the Jury Award back-to-back. More importantly we were able to share a piece of work with the world that I am proud of and that inspires people and reminds them of the power of hope. It’s felt strange to celebrate the wins given the circumstances of what we all find ourselves in, surviving a pandemic, and I think that’s why DAME has found such a following this year. DAME is a story about inner strength and getting back up again. There’s something very courageous about someone facing the despair associated with sudden and inexplicable loss, which is what Elizabeth Taylor goes through in the film, and still having hope for a better day. … I mean this is why we make films, to show people that they are not alone and that even a woman as seemingly untouchable as Elizabeth Taylor still has to face the very human experience of losing a loved one. I think it allows people the room to grieve and shows them that they can be brave too. Or at least I hope it does.”

Follow this team for an exciting awards journey and for the, no doubt, phenomenal work that will find them next: