AUDIO APRIL: Who are the “wrong people”? 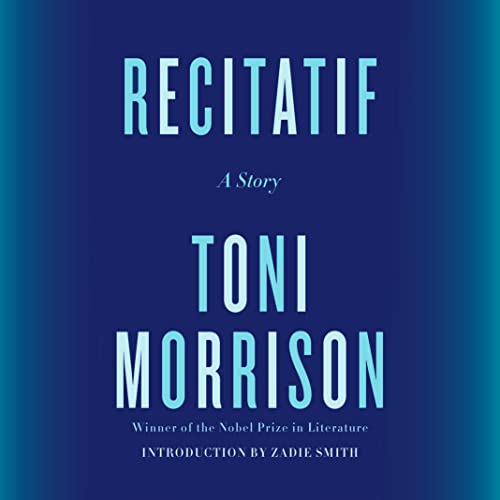 A review of RECITATIF by Toni Morrison.

As a huge fan of audiobooks, it feels like Audio April should be the easiest book review theme of the year for me, but this year it was a CHALLENGE. I researched, and started and stopped several in search of The Audiobook to recommend. I know some of the difficulty was in the criteria I aimed to fulfill. I wanted to select something that wasn’t simply an audio version of a written piece, but rather something where the auditory form added to the audience’s experience of the story. I wanted something that was accessible to everyone not just on a singular app or platform. I wanted something published recently. And I wanted something that was entertaining, engaging, and lovely to listen to. Enter: RECITATIF by Toni Morrison, narrated by Bahni Turpin, introduction written and narrated by Zadie Smith, released February 1, 2022.

First published as part of an anthology in 1983, RECITATIF is Toni Morrison’s only short story. It’s an intentional exercise in storytelling. Morrison herself stated that the story was, “an experiment in the removal of all racial codes from a narrative about two characters of different races for whom racial identity is crucial.” The story follows two girls who meet at an orphanage at eight years old, Twyla and Roberta. We’re told one is white and one is black but not given specificity as to which is either. Over the course of the narrative we see the girls grow up to become women and then mothers during the time of integration and busing, and yet clarity about either character’s race remains hidden. Twyla tells us the story in first person, upon reflecting on a childhood experience she notes: “Things are not right. The wrong food is always with the wrong people. Maybe that’s why I got into waitress work later—to match up the right people with the right food.” But who are the “wrong people” and why? What do I assume as the audience? And what does that say about how my brain makes sense of the world? Moments like this make RECITATIF is a masterwork of the short story form, intelligently engaging in a character study of the fictional folks as well as the reader themselves.

The audiobook is a grand total of 1 hour and 54 minutes long, almost evenly split between the story and Zadie Smith’s introduction, but I’m betting it will stick with you long after your first listen. Bahni Turpin’s magical voice adds so much warmth and grounding to the audio experience of the story and is beautifully paired with Smith’s insightful, introspective analysis. I took a piece of advice from the comments that I want to pass along here too: Read the “Introduction” last. To truly engage in the intended “experiment”, listen to Morrison’s short story and then Smith’s unpacking of it. Two hours, well spent.