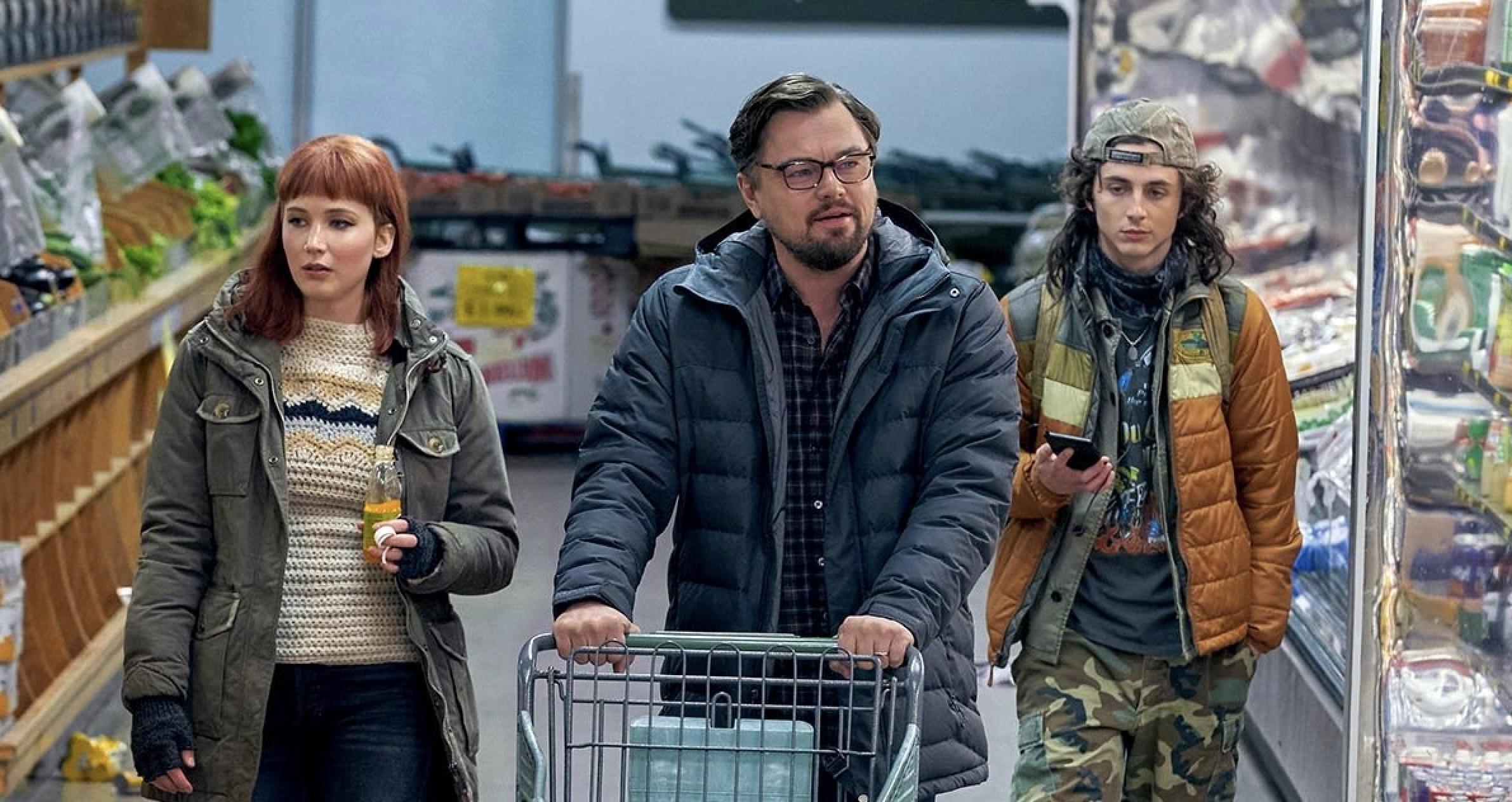 DON’T LOOK UP hit me in a way that I was not prepared for, much like the giant Earth-bound comet central to the movie’s plot. Writer/director Adam McKay’s apocalyptic dark comedy is certainly funny but it also often cuts very close to our real life media-centric experience while aiming for satire. Some elements are meant

DON’T LOOK UP hit me in a way that I was not prepared for, much like the giant Earth-bound comet central to the movie’s plot. Writer/director Adam McKay’s apocalyptic dark comedy is certainly funny but it also often cuts very close to our real life media-centric experience while aiming for satire. Some elements are meant to be farcical projections but feel strangely a little too real, which left my brain in a weird limbo between catharsis and uncertain cringe. There is a carefully choreographed tightrope walk with satire, a precarious balance of sharp commentary and exceptional comedic timing. Does DON’T LOOK UP accomplish this? Or does it fall into the safety net of an emotionally exhausted audience in need of bleak humor? Honestly, I don’t know.

Upon the film’s initial release critical assessment was generally unfavorable, but as viewership statistics rolled in a clear disconnect became apparent. DON’T LOOK UP broke the viewership statistics for a Netflix new release. More and more people watched it, so more and more people talked about it, which meant that even more people watched it. It’s star-studded cast, snappy dialogue, and end-of-the-world comedic conceit have made it the talk of the town, and carried it all the way to the Academy Awards.

The movie primarily follows two low-level astronomers, Dr. Randall Mindy (Leonardo DiCaprio) and Kate Dibiasky (Jennifer Lawrence), as they try to warn the world of a “planet killer” comet headed for Earth. Instead of launching a countdown to save the world however, Mindy and Dibiasky’s attempts put them on an obstacle course from hell, primarily featuring a “what’s in it for me” President (Meryl Streep), a laissez-faire news anchor (Cate Blanchett), a smilingly creepy tech mogul (Mark Rylance), and, of course, the ticking clock of the ever-nearing doom comet itself.

DON’T LOOK UP is “Offbeat, Provocative, Witty, Irreverent” just like the Netflix description tags say it is. Brilliantly specific characters are played well by the A-List cast. Story-wise the movie also succeeds in displaying the broad palette of human responses in the face of our own mortality; denial, overindulgence, melancholy, panic, etc. But the sharpest comedic commitment of the film is the level of human pettiness that perseveres in the face of the apocalypse; best exemplified, in my opinion, by a particular run about snacks (which turn out to be free). However, after watching DON’T LOOK UP, I was immediately reminded of the 1997 Barry Levinson dark comedy WAG THE DOG which similarly satirized present day events of the time. The thing is, by the time WAG THE DOG was released the comedy around the eccentrically powerful spin doctor (played by Dustin Hoffman) no longer felt absurd or hyperbolic, instead it felt eerily too real. As Roger Ebert said in his 1998 review: “It is getting harder and harder for satire to stay ahead of reality.” This feels like the strange situation DON’T LOOK UP is in as well. Sure, there is no comet headed to destroy Earth (that we know of), but the unexaggerated reality reflected in the film is that Earth’s climate is shifting, people will say and do (or omit saying/doing) anything for money and power, and the institutions we depend upon in the face of impending catastrophe are made up of flawed people not fortresses of morality. This weirdness is likely the best explanation for my own mixed-up feelings about the film.

Perhaps the timely magic of DON’T LOOK UP is its bleak parody. In the face of our increasingly bizarre and hyperreal existence, where the future feels fraught verging on hopeless, there is something undeniably cathartic about the ability to laugh at the craziness. For that reason it seems possible (though admittedly, unlikely) for DON’T LOOK UP to win Best Picture, but I’m fairly certain it won’t be going home empty-handed.