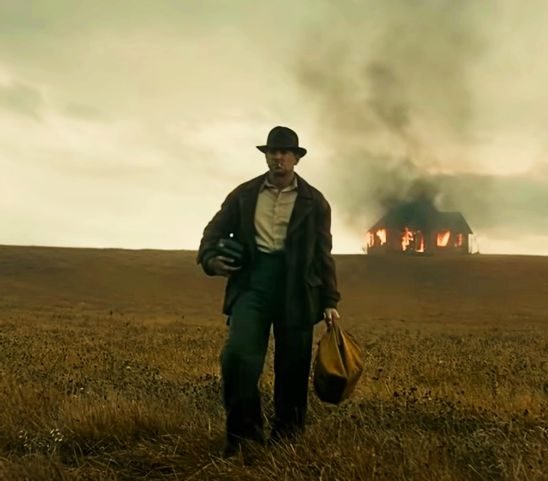 “But the moment it speaks to probably connects more for people in show business than any other walk of life, and show biz people are the ones that vote… so it’s not a long shot for Nightmare Alley to be the best picture winner.”

I saw Guillermo del Toro‘s new movie in black and white. I knew that this option existed but the decision to see it presented this way was not on purpose, but I’m glad I did. Nightmare Alley, written by Guillermo del Toro and Kim Morgan, feels like it belongs in the past, that it would be most impactful for audiences members coming out of the Great Depression and WWII. A Hitchcockian or Wellesian tragedy, played out in front of a carnival backdrop. While maybe quieter and less flashy than Shape of Water, I think I enjoyed this tale more. Maybe it’s because there’s less “buy-in” of the world on my part, carnival shows require less suspension of disbelief than a world with a fish man in it.

More than likely, I relate more to this story, than with del Toro’s most previous works, is because this is a story of a man trying to fake his way into wealth and fame.

One of the most prevalent aspects of the American life is the idea that we live in the “Gig Economy”, that most people are bouncing around from one job to another, with the understanding that those gigs won’t last forever. Comparisons with late 30s Depression is pretty easy to see. I would add that we are living, or will live, in the “Content Economy” as well. That the mojority of business, marketing, and even personal life decisions are being shaped with the understanding that what we do needs to be on social media, tweaked to take advantage of algorithms. Whether these are active choices or not, the drive for content shapes everything. People just want to watch a show. Whether you’re in the audience, behind the curtain, or in the cage on stage, the show is going to happen.

I think that’s what Nightmare Alley speaks to most. The idea that people, in order to get ahead, have to contorted their beliefs, values, and self, to get more attention. That the attention both fuels our economy and our self worth. How much are you willing to debase yourself for attention, how much of yourself are you willing to expose?

For Bradley Cooper, he is willing to go all the way down. From general lying to murder to pretending to raising the dead, literally playing God. It’s an old and simple tragedy. Man wants more, and is willing to do more to get it. What “it” is becomes more greedy and self obsessive, and “do” becomes more and more cynical. We’re told what will happen to people like Bradley Cooper, but yet the ending still got me. His demise gives you schadenfreude. The movie, to me, loses its uniqueness once it moves from the carnival to the big city. Trying to be more interesting than the people that work in the carnival ended up being too tall of an order. The movie does exchange the circus backdrop for the most craven cons Bradley Cooper tires to pull off. So the show still does on, but in a more boring setting.

The supporting cast is superb, from Rooney Mara, playing the love interest that is too good for Cooper. To Ron Perlman, a Step Brothers reunion with Richard Jenkins and Mary Steenburgen. Plus Cate Blanchett and Toni Collette! I’m even missing some actors, but you get the point. The bench is deep in this movie.

Oscars like to reward honesty, performances and productions that “go for it”, and pieces that speak to…a moment, even if it’s not your moment. No one really gets “lost” in their performance and this film is truthful, but is all about the con. But the moment it speaks to probably connects more for people in show business than any other walk of life, and show biz people are the ones that vote… so it’s not a long shot for Nightmare Alley to be the best picture winner.

Nightmare Alley is in theaters now or stream it on HBO Max.