BLONDE’s Brutality Is Important, But We Don’t Deserve Her 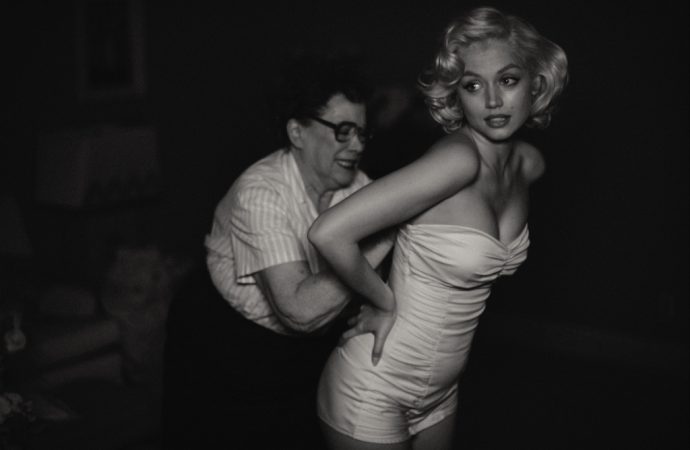 Y’all had no idea that the internet would exist. It’s obvious. The men who ruled Hollywood had no idea that blood would pour out of every broken statue they carved. This city is *still* imbalanced towards bodily torture, having no real reckoning. The alcoholism and shame that almost killed Norma Jean never stopped coming for her. Monroe’s story is wrapped in cinematic poetry over and over because it attracts the oppressed as well as the eye of the oppressor. Her story is a vehicle for so many stories. BLONDE’s winding collage takes us deeper than a slice of life that’s already present in every framed photo. BLONDE exposes an inner life that would surely upset the MPAA.

Ana de Armas‘ “Norma Jeane” is earnest. An understated approach to her wielding of what little power she could pull together. She conjures the Queen, but she gave us the broken parts. Lily Fisher‘s young Norma broke me.

Bobby Cannavale will always deliver Cannavale. Adrien Brody is detailed, well crafted, and a dream. And Julianne Nicholson as Norma Jean’s mother “Gladys” is as mesmerizing as ever. But, remember, this is not her mother-

From “Should you watch ‘Blonde’? Review of the Marilyn Monroe Netflix Movie” by Andrew Morgan:

“The film stars Ana de Armas (Knives Out, No Time To Die) as the blonde in question Norma Jeane – yes, the extra “e” is intentional, more on that in a moment. Alongside her are Bobby Cannavale (The Irishman, Boardwalk Empire) as the “Ex-Athlete”, Adrien Brody (The Pianist, The Grand Budapest Hotel) as “The Playwright”, Caspar Phillipson (Jackie, Project Bluebook) as “The President”, and Toby Huss (Halt and Catch Fire, GLOW) as Marilyn’s makeup artist Whitey.

Now, before we get to the review, let’s get all the throat clearing out of the way about evasive names, NC-17 ratings, de Armas’ casting, and a few other hang-ups that may need clarity.

In 2000, Joyce Carol Oates wrote a book called “Blonde”, a fictionalized account inspired by the life of Marilyn Monroe.

The author Oates INSISTED on many occasions that the book was a work of fiction; however, that did not stop Monroe historians from taking the book to task. Within its pages lies what The New Yorker called “the definitive study of American celebrity,” where she uses Monroe’s story as a more modern take on “Moby Dick.” Still, it also has fabricated characters, conflated events, and false depictions of real people from Marilyn’s life.

In the late 2000s/early 2010s, director Andrew Dominik (Killing Them Softly, The Assassination of Jesse James By The Coward Robert Ford) started adapting Oates’ novel. Dominik “wanted to do a story about childhood trauma and how that shapes an adult’s perception of the world.” His original idea was to do that for a serial killer, but when he read Blonde, he thought, “well, I could do this with an actress, and it should be slightly more sympathetic.”

While the film is largely more effective than it is baffling, the one thing that I still reckon with is the use of an iconic figure to deliver its message and depict an era of exploitation. This is not a biopic, nor was the book a biography; however, is it inherently irresponsible to create moments in the life of someone that are completely false and mix them with painstakingly accurate details of that person? Are we relying on the audience to know the difference? Do these created events serve the story more than the real life of the person depicted? How do these creations change the lives of the other real-life people in the film or their families? How can we justify hearing the name “Marilyn Monroe” and not match up this story to the life that we have seen depicted in other forms many times over? I found myself thinking about these questions as much or more than the questions raised by the film itself. Will audiences take this as an art piece to be taken at face value or will they be clouded by the uber-famous face that the film does not disguise? Norma Jeane with an extra “E” may work better in novel form than on-screen.” I encourage you to keep reading this reviewer’s thoughts on “Should you watch ‘Blonde’? Review of the Marilyn Monroe Netflix Movie.”

Norma Jean’s life is difficult to reconcile as a continued statue, still being propped up to tell other stories without her consent. But as an actress, I understand that another actress who dedicated her life to telling stories gives the inherent consent to still perform. Even decades after we lost her. But it doesn’t sit right with me, anyway. No matter how I try to explain the situation to my intuition. But my intuition cannot be controlled.

The best of this project is how responsible *we* have become to present difficult images, concepts, and conversations surrounding consent for all bodies in all situations. And presenting our current BLONDE actress access to healthier working conditions. Reimagining moments from her life with new meaning, Monroe gives us so much – still.

Get ready for a long ride, this 3 hour experience needs your full attention to appreciate. I relish the experiential blurred lines and cascading emotions as opposed to a seamed narrative. But I’m glad I was at home to sprawl in my PJs and take plenty of bathroom breaks without missing a moment.

“Blonde” is now streaming on Netflix and playing in theaters, Click HERE to watch on NETFLIX