Breathtaking, Ice Cold, & Sobbing Through THE SUMMIT OF THE GODS 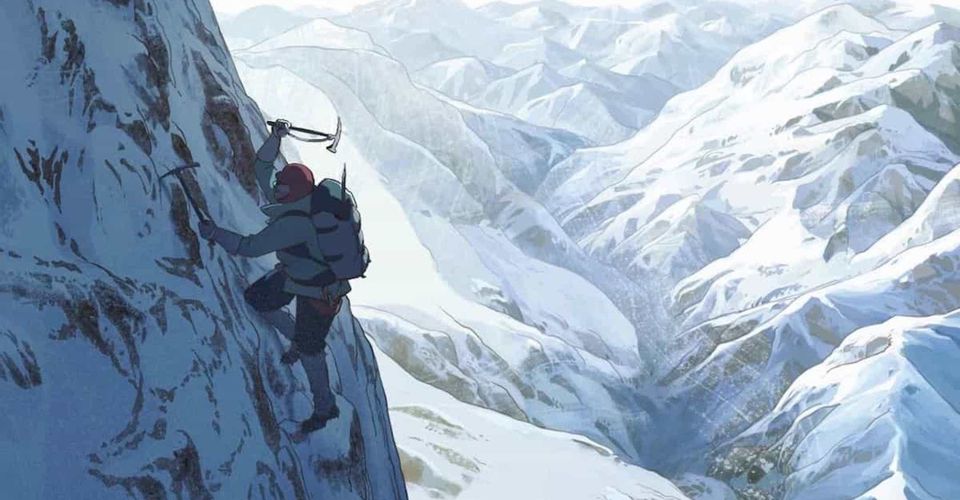 I attended the Animation Is Film festival at The Chinese Theater in Hollywood and subsequent Netflix after-party at the Roosevelt Hotel to see a film I knew nothing about. I hadn’t researched this piece or watched a trailer. I just went in cold. And I was FREEZING the whole time. This animated drama took me

I attended the Animation Is Film festival at The Chinese Theater in Hollywood and subsequent Netflix after-party at the Roosevelt Hotel to see a film I knew nothing about. I hadn’t researched this piece or watched a trailer. I just went in cold. And I was FREEZING the whole time. This animated drama took me to the top of Mount Everest and convinced me that I should never ever ever climb a mountain.

A slow moving drama, the pace of an academy award contender given the ideal prestige casting. This movie is not meant for young audiences. As the juror Charles Solomon who opened the film introduction pointed out, “Animation in America is different than in other countries.” We (American decision-makers) don’t take risks, we don’t allow mortality to be at the forefront of the story. Yes, he points out, that Simba’s Father dies, but at no point in the rest of the story do we truly believe Simba’s poor tender life is at stake. It’s true. We don’t allow the tension to pass the point of ‘anyone in this movie can die at any time’ and in a movie about climbing mountains, ya gotta shake off your super-human belief that everyone will make it out on the other side just fine.

I sobbed. I was very upset and pulled in at a level I hadn’t anticipated. I have written about Anti-Animation-Bias before and this is a good one to watch to combat those issues.

From ‘The Summit of the Gods’ Review: Mount Everest Is No Less Imposing When It’s Animated by Michael Nordine: “For the 4,000-plus people who have climbed Mt. Everest, it’s likely that no film will ever come close to capturing the reality of that once-impossible experience. For the rest of us, “The Summit of the Gods” and its ilk will have to suffice. And while it may not ascend to the same heights as the likes of “Free Solo” or the under-appreciated “Vertical Limit,” director Patrick Imbert’s animated adaptation of Jirô Taniguchi and Baku Yumemakura’s manga of the same name makes for an impressive trek.”

Director Patrick Imbert spoke at the QnA after the film about a few important matters, getting the climbing right and getting the climbing right. He shared that he had to repeat sequences over and over until he got pieces of them accurate. The team hired a consultant who came to their offices with his climbing equipment and hung himself up on the inside balcony of the office in order to act and out what to do in situations presented in this film. The accuracy and attention to detail tears anti-animation-bias to shreds. AND the time periods this film spans made it difficult for animators to get the climbing equipment accuracy for every kind of climber. I was on the edge of my seat and enthralled by a movie that I had forgotten was not really a life-or-death shoot. The cold, the mountain crackling, the headaches, and the sound design take you away because of this attention to detail. You couldn’t convince me that this is drawn by people who never set foot on the summit.

More about director Patrick Imbert from Animation Is Film Festival: “After graduating from Gobelins, l’école de l’image, Patrick Imbert worked as an animator on several feature films. He later became animation director on the feature Ernest & Celestine, where he met Benjamin Renner. After this fruitful collaboration, they decided to continue working together.”

And again from Michael Nordine: “It might be said that, in order to succeed, a Mountain Movie must have two elements: kinetic climbing sequences and at least one monologue about the philosophical — because it’s always about something beyond the climb itself. Reaching one goal has a tendency to make climbers seek out a new one — whether it be a higher mountain or more extreme challenge, like climbing solo or without oxygen — and some people can’t stop until fate intervenes and they meet their final resting place on an unforgiving mountainside. Whether that’s true of Habu shan’t be revealed here, but suffice to say that “The Summit of the Gods” makes a case for the journey mattering more than the destination.”