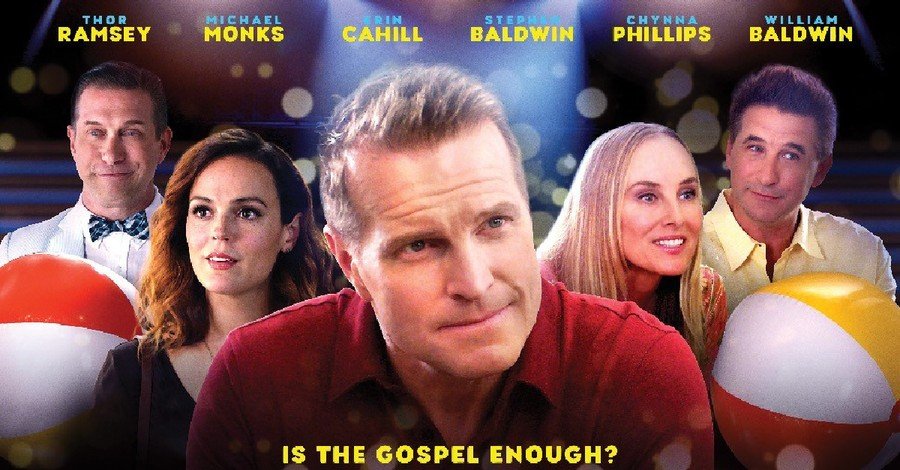 This film is for church people by church people and the message is to wake up and stop perpetuating what it means to be “church people” in a post-Christian world. I can dig it.

“We’ve seen so many movies bashing people of faith, told from an outsider’s perspective. And we’ve seen films made by Christians that vilified the outsiders. I’m really proud of the fact that we made a movie that has a lot of laughs but asks us to take a hard look in the mirror.” -Writer and co-Producer Wes Halula

I finished watching CHURCH PEOPLE with a bowl full of ice cream and a warm heart. Ya see, I grew up in the church and I have a lot of big feelings around the culture portrayed in this film. I had no intention of catching feels and letting myself be moved, but I am warmed by the call for church people to reflect on the problem of power in hierarchical structures, seeking fame, and gimmicks to replace the work of the spirit. I am warmed by preaching to the choir pieces less focused on how congregants should hold themselves accountable but how men in positions of power (along with permission from the board) should consider how they contribute to the perversion of the culture. Mega-church emersion and behind-the-scenes candor give opportunities for laughter and lamentation. This is safe for the whole family and yet, may make some church-goers uncomfortable. It’s uncomfortable and yet the highest form of respect to hold people accountable.

Although… let me just get this out of the way here as I don’t think the target audience of this film will have huge issues with some of these items: This very male-focused piece was definitely lacking any female storylines that were not reactionary or male-centered. Centering men with ‘flaws’ that they brushed off as charm is an issue that never truly gets addressed. They had quite the issue with putting white faces in front of mission work shop-talk and loads of African art, but pointing out qWHITE a few of these issues is less effective when there are no People of Color or Women in Power in anchored plot positions in this story of how male leadership should take a look in the mirror. This film does not pass The Bechdel Test either. The fetishization of the Pastor’s Daughter is not my favorite thing (hello, Pastor’s Daughter here, it’s painful for PKs to continually absorb this stereotype from artists of secular AND faith communities) and I want to say I can give that a pass (because I loved her), but she was entirely defined by her position as desirable to 2/3 of the male leads ’cause the other 1/3 was her Dad. The principal cast all come around to some lovely arcs in this film, however, these issues here are not addressed in any meaningful way. The ‘work’ is not necessary to the story and thus equity and justice is not considered, relying on hope and God to fill in what comes next. But what does come next? What are we hoping to see?

The story is simple and positive. The stakes were high. The premise was exciting. The performances were charming. The comedy was slower or more broad than my preference, but Joey Fatone, the whiney and insecure worship leader “Tino,” was still fun. The first scene with Erin Cahill‘s “Carla” and Andriana Manfredi‘s “Gretchen” was fun and a breath of fresh air – they brought so much life to the film. Erin Cahill is wonderful to watch, it’s ok to have a girl-next-door romantic lead, I have no issues with that at all, I’m just so glad they invited this wonderful enchanting actress to play. She was up for the challenge and an incredible co-star to Thor Ramsey‘s “Guy.” Thor Ramsey as our main Guy was relatable, likeable, fun, as energetic as a reasonable youth pastor, and kept us wanting to know how he was going to point us back to forgiving the church. Michael Monks “Pastor Skip” was difficult to love in the best way, he felt like a real thinks-he’s-cool Pastor (not cool like MY Dad, of course). Donald Faison was a lovely villain, although he could be plucked from the story without impact – but WHY?! He’s so wonderful, seamless, funny, and can get away with being the villain, so let him tell us more of this story! Let Donald Faison make this movie great, pour him into every scene. Stephen Baldwin‘s “Chad” was an angel, it’s pretty specific to this and the Christmas genres to have an Angel working as a soft-gloved puppet-master and he really leaned into it. And I liked him in it.

The writers grew up in the church, you couldn’t convince me otherwise. They even had the youth pastor sit in a chair backwards and play with remote control cars between scenes. They poke fun at my-Pastor-wrote-a-book and idolizing merchandising. It’s all pretty bright, bland, and superficial as the airplane hanger sized megachurch itself. Including mega parking lot jokes. Why not? It’s fun. Guy’s past-life bombshell was awkwardly introduced and not handled with any care, but the impact of having a child in this way did give us a chance to see how people of substance stride through the messes of life with love and empathy and how church leadership treats life’s complications with no grace at all. Firing a person in ministry leadership for the simple act of loving consensual sex outside of marriage is awful and 100% true to the experience of many Christians. I’m happy to see these writers bring this up and let it play out as realistic as I’ve seen it before.

The ending was handled so well and I can’t wait to send this link to my Mom and Dad to watch. I was pretty sold on the high stakes premise and definition of a scandal, but I am excited to recommend this movie because the heart behind the people is evident in the unfolding of the Gospel itself. Letting people be moved to see and express and confess is beautiful stuff. Church people know this. Watching us become more Christ-like and dying to whatever we’re clutching is a moving experience we desire to witness over and over. Watch this one to remember what life in a service feels like, something I miss dearly these days.

I had the lovely opportunity to ask a few questions of a very talented person on this film. Credited as a writer and co-producer, I asked Wes Halula (a person I already knew before this film was made!) to give me some insight into his work and how he came to bring stories like this to life.

Wes Halula: “I was grew up in Kansas City and went to college in Minneapolis. I lived there for 17 years. It’s where I started writing, directing, acting… a great Petri dish! We’ve been in LA for 12 years now …My years in Minneapolis were extremely formative. It’s such a creative environment there. I was able to work in all aspects of production, write plays, act in theatre, film and commercials. It was a magical time. I think it’s changing now but when we first moved to LA, there seemed to be more pressure to “pick a lane.” I’m glad I had that freedom to experiment and try new things in Minneapolis.”

I was incredibly moved by the choices of what to celebrate and what to scrutinize in public ministry for this film. I was impressed with not holding back on issues that need to become normalized as a part of discussion for leadership in ministry. I also wondered how he got involved on this delicious project!

Halula: “I’d written several films for Stephen Baldwin over the years. He called me and asked if I’d be willing to jump on as a producer and help him work with first-time actor Thor Ramsey. Thor has been comedian for many, many years. I told Stephen, “I know Thor! He helped me move in when I moved to LA!” The film takes place at a Megachurch so they were planning on filming at Calvary Community Church… a megachurch in Westlake Village, CA. I knew everyone on staff there, too. So it just felt like a perfect fit. …I started my career in comedy but somehow ended up writing a lot of dramatic content. I love both. But it was a lot of fun to get back to my comedy roots. I’ve always said that if I’m writing a drama, I make it funny and if I’m writing a comedy, I make it serious. But this film feels like it’s 100% both. It’s not 1/2 comedy and 1/2 drama. They’re all melded together. Just like real life.”

Collaboration is vital to finding a story that can resonate and addresses issues with a wider lens like ministry. There is so much to take into account, I asked Wes about the collaborative experience.

Halula: “Thor Ramsey wrote the original script. Bob Sáenz did a draft. Then Thor and I rewrote the script together. Christopher Shawn Shaw was the director. Stephen Baldwin and John McGalliard were the executive producers. Stephen was in the film, as well. The cast was incredible. Donald Faison, Joey Fatone, William Baldwin, Chynna Phillips… so many funny people… I had a so much fun writing the final draft with Thor. Christopher sat in on some of those sessions, too. We had a lot of laughs together. But my favorite part would have to be the collaboration on set. So many talented, funny, kind people. It was what you imagine working on a comedy would be like when you’re a kid. I also love that we made a film that has something to say. We, as church people ourselves, made a movie about church people. We’ve seen so many movies bashing people of faith, told from an outsider’s perspective. And we’ve seen films made by Christians that vilified the outsiders. I’m really proud of the fact that we made a movie that has a lot of laughs but asks us to take a hard look in the mirror.”