DELICATE STATE Explores Extremism And The Privilege Of Procreation 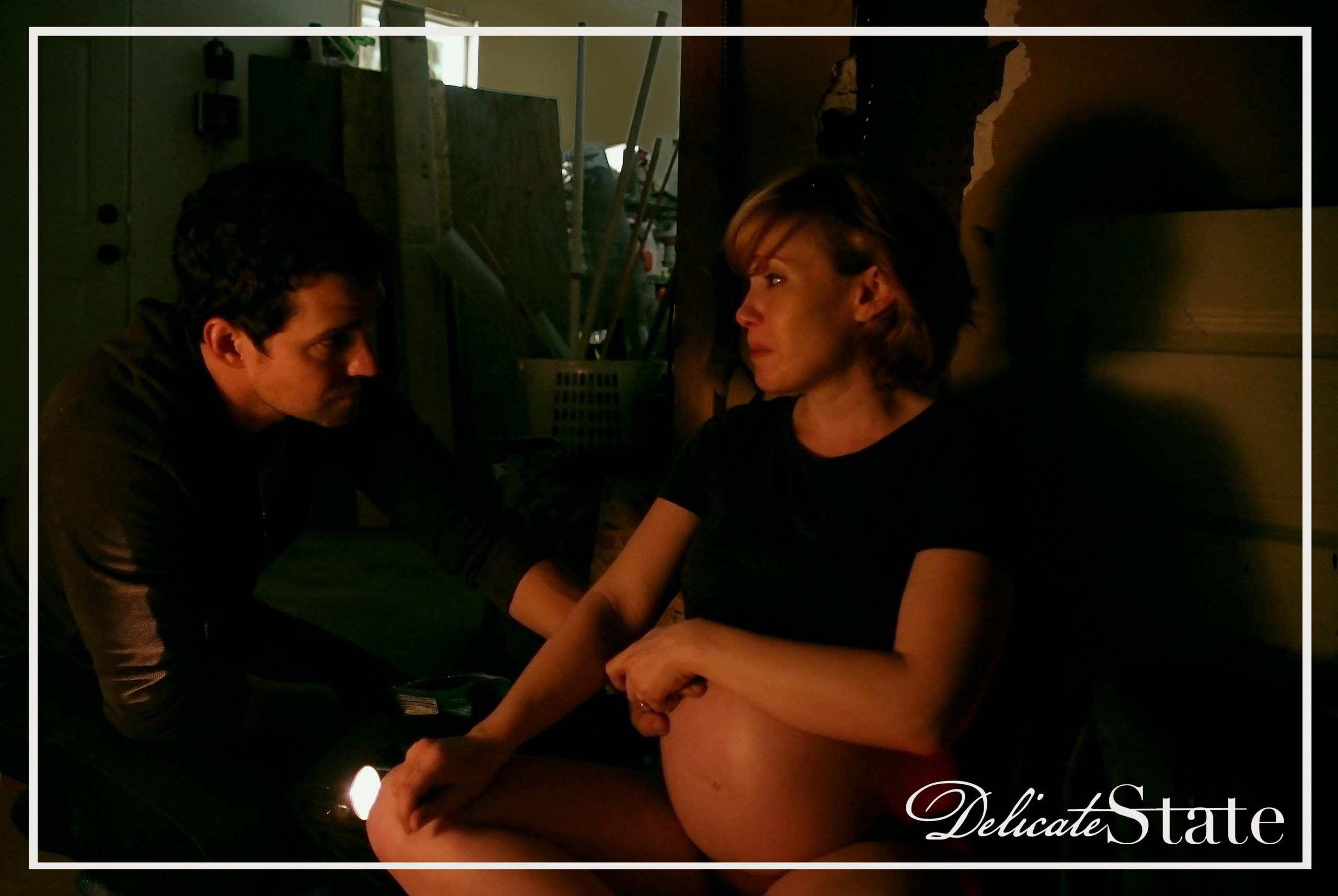 A film review featured at Dances With Films.

DELICATE STATE is not what you think it’ll be. Intimate in scope until it isn’t. Small production between a husband and wife until it isn’t. Surprising and unique in every scene. The emotional landscape delicately laid out in the first act pays off in the destruction of everything we came to expect in the third act. You have no idea where and how we will get to this finish line beyond the veil of life and death. And the filmmakers deliver in performance, in concept, in direction, and in macro world-view issues we didn’t even know we were going to address together. A bait and switch of the best kind.

What is Motherhood? Physiological, emotional, and mental change from one type of human to another – the procreator who began the journey is not the parent who comes out on the other side. This film addresses those changes. Paula Rhodes as “Paula” is kind, reserved, comically cute, sensitive, a team-player, and open-hearted. I imagine this reflects Paula Rhodes exactly. But I’m going to speak strictly about her character. Paula is exposed ultimately as close-minded, unable to see outside her individual life, and new to the real issues in society around her. She is self-centered and that’s ok in procreation. But that’s not ok in a communal and connected society. Our filmmaking team allows Paula to be exposed for her lack of engagement and education in real-life issues. She is on a journey to be a better version of herself in a visceral deconstruction. I couldn’t describe a better metaphor for procreation than the tearing down of what was before and addressing the mortality and fragility of humanity in the pursuit of a better way of living. It’s a continuous cycle. DELICATE STATE is cleverly named and points to the vulnerability of every system in which we live, ever moving and demands our ever presence. Like a Mother.

I was rarely brought ‘out of the moment’ knowing Paula was in the scene AS a procreating person. I had hypothesized the opposite. Her performance is enchanting, but the obvious reality of her being felt rooted and added to the experience for the viewer instead of making it an obstacle. Experiencing her joy in the first act gave us a LOT to hold onto for the rest of the ride.

What is Fatherhood? We come to see that Charlie’s development takes on a bigger role than the premise presents. Charlie is an excitable, silly, and naive soon-to-be Dad who continually grapples with the weight of what the patriarchy expects in his ability to provide, and protect. His able body and privilege cannot create a barrier between his growing family and this messy world. He’ll never be cool enough, strong enough, big enough, present enough, or even aggressive enough to match the expectations he has been saddled with in our reality. His existential arc is grounded while his sensitivities are on display. Actor Charlie Bodin and his character “Charlie” are one in the same. There seems to be no barrier between the two. Although I genuinely hope there is! I cried with him and, of course, I laughed with him. His performance is humanizing and thoughtful.

Glenn Morshower as “Glenn” and Cathy Baron as “Cathy” shine in their supporting roles. Characters who choose extreme actions in response to extreme times. These characters reflect back to the audience that our main characters are supposed to seem reasonable and grounded, but lovingly our filmmakers are addressing that our main characters are in fact – unreasonable and part of the problem. When a sister begs her pregnant loved one to protect themselves in the face of impending war, that sister is acting in love. Cathy is painted as a stupid conspiracy theorist who is, thankfully, given validation in the end. Glenn is a white supremacist and openly shares his views with our white leading characters – to which Paula reacts in horror and Charlie still begs for assistance in the goal of protecting his family. That scene alone can be discussed and deconstructed at length. But this movie moves on.

The film will be ultimately successful in what the team beyond the performers bring to the story. The editing by Rachael King and VFX by David Mattey makes this movie truly work. Without that huge focus on the emotional and logistical through-line and leap in scope through the sudden pivot to VFX support, this film would easily fall flat. We, as an audience, can take great chemistry and stellar performances for granted. It’s considered a requirement for me to continue watching a film. But this movie hinges on the challenge of editing and VFX.

With all the talk about an impending war, does this film take a political stance?

As the majority of the film seems to make the division of the country out to be about extremism vs cool-headed diplomacy or just lack of engagement, this film ultimately takes a hard political stance. The audience is not so delicately led through neighbors ignoring state terror, violent robbery, and ultimately takes a chance on addressing anti-racism. This movie promotes a classic “punching Nazis is always ok” message – when encountering a genocidal racist, extreme and deadly force against genocide (in practice, not in ideology) is likely and warranted. Although our main character later describes point-blank murder as bad in her video message to her unborn child, we still grasp that any imminent danger against a group of people based on race/culture is considered imminent danger to all and thus deadly force is often the most appropriate response given that our American system allows deadly force in self-defense. So, if the director’s statement aims to say that this film doesn’t take a one-sided political stance, that is not the message I received in the theater. Someone was going to die in this movie, the filmmakers created a villain that is easy to hate – as short and abrupt the moment comes, it is almost equally forgotten and noticeably not embedded into an overall message, becoming an out-of-character stunt instead of a character arc. I could argue that a privileged woman could safely ignore her community and her world and STILL adequately address an overt radical racist human hunter – totally, but this moment was presented as a final straw/ breaking point and not an earned response. And the character immediately back-tracks to explain that killing is wrong – having learned nothing from her experience and disappointing an audience hungry for acknowledgment of being radicalized.

This film takes a stance on the medical care system and tone deaf insurance companies, state terror being too big for the individual to address in one-on-one conflicts, pregnancy care being a priority to overwhelmed medical facilities, and patriarchal demands on men. Having an inherent political lens in which we create media makes it difficult to claim no bias, I don’t want media creators to feign a non-partisan stance. This movie makes that point pretty clear, actually. The primary characters in our film each make a choice and take a stance by not taking a stance until it comes breaking through their home. This film IS for everyone, but “both sides” CANNOT relate to the main characters. The privileged can relate and those suffering the effects of income equality and state terror cannot. This movie amplifies the divide not between red and blue but between oppressors and the oppressed.

Overall, I enjoyed the movie. I enjoyed the characters. I would like to see more of this team and more of their work. There is a LOT to unpack and I imagine the creators have grown in many ways through this process. I look forward to seeing what they do next.