Don’t Miss These Tips From Television Academy Member From Hollywood North “I had no idea how much training, time, money, blood, sweat and tears would go into my dream.” 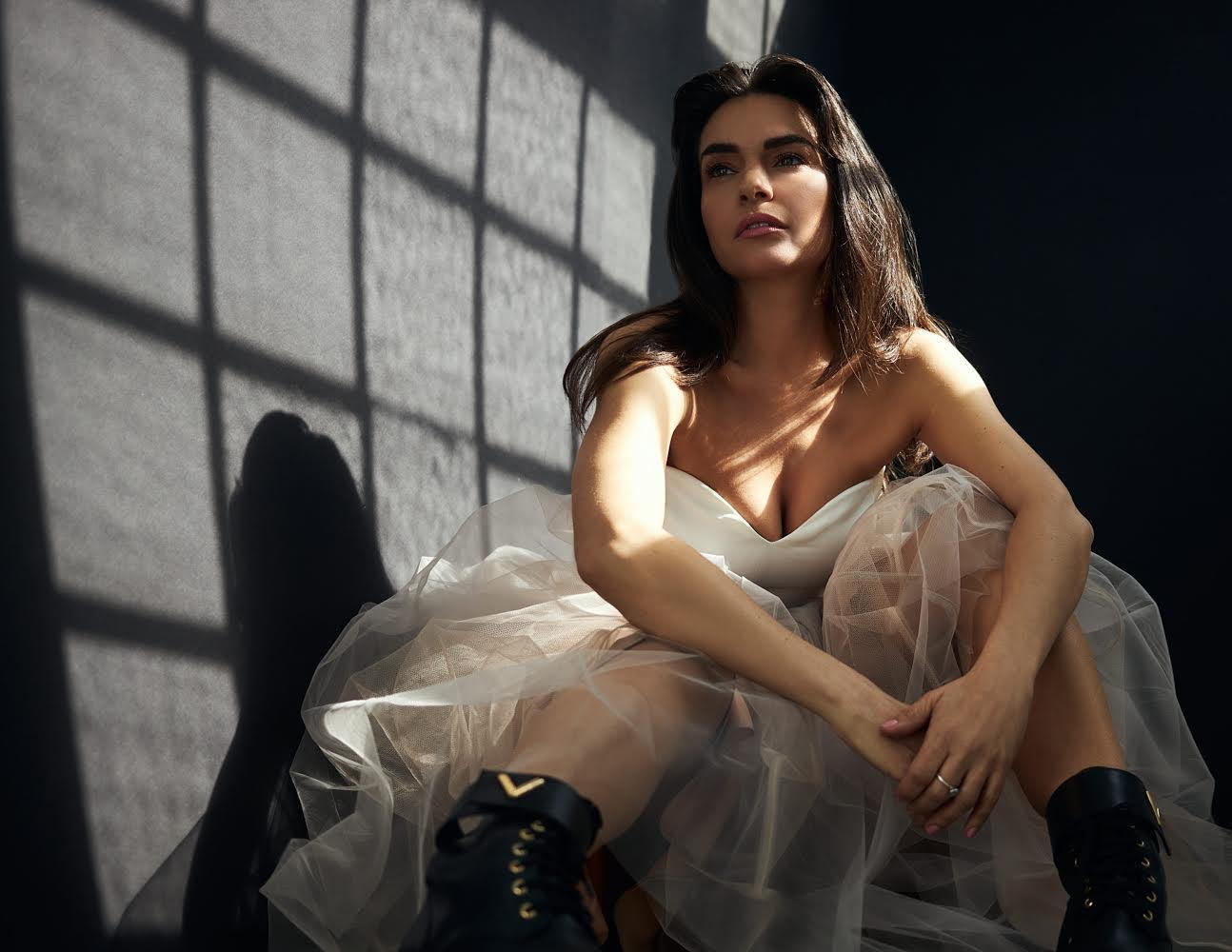 Mercedes De La Cruz (Gendron) is a Canadian actress, best known for her memorable and charismatic performances in more than two dozen television shows and independent films. As a model, De La Cruz has graced the cover of ALEPH Magazine, was Former Miss Hawaiian Tropic, Poster Girl Molson Canadian and notably secured a highly visible contract for The Brick before Cindy Crawford took the campaign over. After a successful modeling career, De La Cruz made the transition to a versatile supporting actor, lauded as a “great actress” by the likes of Academy Award nominee Sally Kirkland. For her role as Carla, a savvy pregnant prostitute, in Ramshackle Blues, De La Cruz was nominated for Best Supporting Actress at the 2019 Vancouver Badass Film Festival.

De La Cruz was born and raised in Edmonton, Canada where she began performing onstage at the age of three. She was a gifted dancer winning countless competitions and awards including Outstanding Performer from Lecky’s School of Dancing in 1994. She loved to dance and performed in front of large crowds in productions such as “The Nutcracker” performed by the Alberta Ballet. From there she went on to Musical Theater and then Classical Theater where she fell in love with the art of acting. She began with small roles and music videos and in 2009 made a move to Vancouver, Canada to pursue acting full time. Shortly after her move to “Hollywood North,” she landed numerous international commercials and now appears in various episodes of many hit TV shows and movies, including Hallmark’s upcoming Right In Front of Me opposite Janel Parrish, Lifetime’s Lonestar Christmas opposite Marco Grazzini, AMC’s Bates Motel opposite Freddie Highmore, Bravo’s Girlfriends’ Guide To Divorce opposite Lisa Edelstein (House), History Channel’s Project Blue Book opposite Aidan Gillen (Game Of Thrones) and the WB’s Supernatural opposite Jared Padalecki. De La Cruz recently wrapped filming the co-lead in the feature Because You’re Dead To Me and a co-starring role on the Netflix series Maid. She studied acting under the likes of Jeff Seymour, John Cassini, Neil Schell, Kate Twa, Dean Armstrong, Mathew Harrison, Zibby Allen, Jeb Beach, Bradley Stryker, Michelle Allen, Anthony Shim, Lindsay Gibson, Edward Foy, Daniel Bacon, Rhonda Fisecki, Shea Hampton and Adam Davenport. Mercedes is represented by Melisse Kelly at Cue Management.

How did it unravel to where you became part of the Academy of Television Arts & Sciences? That’s quite an honor.

Honestly, I didn’t ever think of becoming part of the Television Academy. I didn’t know it was something I had an option to do! I always wanted to become an actress, but what I didn’t know were all the steps I would have to take to get there. I had no idea there were so many unions, memberships, groups, guilds and associations possibilities to be a part of. My young and naive mind thought I’d get noticed, be put in a movie and then become a big star. I had no idea how much training, time, money, blood, sweat and tears would go into my dream. I also had no clue the number of people I would have contact with before even getting my first audition—not to mention all the rejection I would get before I booked my first job. It wasn’t an overnight success by any means. I didn’t know what the heck I was doing! I didn’t come from a family of the arts or have a mentor or handbook helping me along the way. This business I have found is not linear. So who knows, maybe if I did have all those things, I wouldn’t be any farther along than I am now. I was born in Edmonton Albert where the film industry is scarce. After I felt like I had done everything I could in Edmonton; small projects and music videos, I moved myself to Vancouver, which is considered to be Hollywood North. I didn’t know many people, what I was doing or where I was going but I wasn’t shy to ask questions to actors and professionals in the industry. One person would give me advice that sent me in one direction and then I would meet someone new who would move me forward in another way. People helping people was really how I made the dream come alive. I took advice, took classes, put myself out there, did any work I could get my hands on and kept moving with a smile on my face. Then, just when I felt confident and thought I had it pretty much all worked out, I moved my home base to Belgrade, Serbia. Now I’m back in the same position I was twelve years ago. I have no idea what I’m doing! The industry is very different here. In Canada, agents submit you for roles and deal directly to casting. In Serbia there are no agents. You have to know people, get in with the casting agencies and have contacts that direct you to projects. So here we are again, back to the drawing board—asking people, getting advice, researching, taking classes and working on my craft every day. Again, it became people helping people that led me to meeting the next big help in my career. I met Adam Davenport, an incredible acting coach, actor and producer who moved from NYC to Belgrade. He was the one who directed me to the Television Academy and helped me make it all happen. He is now the one pushing me in new directions, opening my eyes to new things and supporting me every step along the way. I am so grateful for him and all the people who have given me help, guidance, love, support and all the little pushes I needed.

How does the Performers Peer Group operate? Do you watch everything that’s nominated and then take a vote?

This is the first year I have been a member of the Television Academy and honestly, I’m just feeling my way through it as I go. I get multiple emails every day with screeners for the various programs nominated. All of us 22,400+ voting members may vote on all 16 categories for Programs. However, the awards for the Performers and Individual Achievement are voted on by a specific peer group. I personally don’t even know where to start with watching these programs. I don’t think there would be enough time in the day to watch them all. I guess it’s up to your discretion whether you watch everything, or vote based on what you’re familiar with. Many of the screeners sent to me are shows I’ve watched little of, or have an understanding of, while some of the programs I’ve never even heard of before. I’m still undecided on if or how I will vote this year.

FUN FACT: The first Emmys were presented in 1949 at the Hollywood Athletic Club in Los Angeles. Tickets were $5.00.

If an actor or actress has dreams of being a part of that, what advice would you give them? Well first things first, there are prerequisites for becoming a member of the Television Academy.

To apply as a full Active Member with voting rights, you must have been employed as a performer for a minimum of two years and have ten qualifying credits of nationally exhibited content in a principal role within the past four years. Background work is excluded. At least fifty percent of the ten qualifying credits must be from traditional network broadcast/cable and (or) streaming service original content. The other fifty percent may be from independent web series. The other way you can be eligible for active membership is if you received a Primetime or Daytime Emmy Nomination within the past four years. Once you have these prerequisites, you can apply. There is not just one way of achieving the credits necessary, keep an open mind to new possibilities and ways of things coming about. We all have our own inner guidance system that guides us individually to get to what we dream of. It takes tenacity, persistence, work and a positive attitude to make a little mark in this acting world. If you have a dream, follow it! We’ve all heard the discouraging remarks about how challenging it is to break into the acting world let alone all the competition. The thing is, there’s enough for everyone to go around. Abundance is not just for the few, it’s for all. My aim is to always help as many people as I can along the way, and it has come back ten-fold. My biggest piece of advice for aspiring actors is to constantly keep moving forward. Have plans and goals but be flexible. The universe will throw you curveballs constantly. Training is key. Listening is one of the most important qualities and don’t be scared to ask for help. You are not in this alone. None of us really knows what’s going on here, and anyone claiming they do is lying. Be ready to be amazed and surprised—it’s a wild, challenging and beautiful ride.

Who do you consider to be the greatest actors/actresses in television today?

I must confess I don’t watch nearly enough television to say I am an expert when it comes to rating and naming the actors and actresses on television. What I can say is every time I turn on a program, I’m blown away by the caliber of talent I see in every genre of programming, I just don’t happen to know the actors’ names. I know that sounds horrible, but I’ve never been good with names of people I see on TV or in movies. I get so captivated by the incredible acting, I just see the character and not the actor. The raw and authentic portrayal of human emotions andcircumstances that is done these days is incredible. I love watching people “not act”. Steve Carell and Jennifer Aniston did an incredible job moving from sitcoms and comedies to dramas. It warms my heart to see actors making a comeback as well. Katie Segal, who played Peg in Married with Children, now plays a badass powerhouse on both Sons of Anarchy and Rebel. Gillian Anderson has an incredible career, from The X-files to now; The Crown, Sex Education and The Great. There are many classic performers such as Sally Field, who’s now playing in Dispatches from Elsewhere and Michael Douglas in The Kominsky Method. Elizabeth Moss, Sarah Paulson, and Catherine O’Hara are fantastic in their own way, and I don’t know if Benedict Cumberbatch is in anything at the moment, but I absolutely love him.

Tell us about some upcoming projects you have on your slate.

I’m about to start filming a Legendary Pictures feature film here in Belgrade. I’m not at liberty to give any information about the project yet, but there are a couple things that I can talk about that I have completed that haven’t made their debut. I recently wrapped filming the co-lead in the feature film Because You’re Dead To Me opposite Gardiner Millar and written and directed by Chris Maruna. The film is a two-hander horror/drama about a crooked lawyer who wakes up in a strange hotel room, unable to recall how he got there. All he knows is that he’s been there before. At midnight, a strange visitor arrives. The film is currently being submitted to festivals. I also just finished filming opposite Nick Robinson in the Netflix miniseries Maid, directed by John Wells. It’s about a single mother who turns to housekeeping to barely make ends meet as she battles against poverty, homelessness, and bureaucracy. The series is based on the New York Times bestselling book written by Stephanie Land. None of this could have happened without all of us working together. It might sound cliché but it’s true what they say, “Teamwork makes the dream work.”