Don’t Watch CHIP ‘N DALE With Your Young Kids, An Uneasy For Indie Filmmakers Too 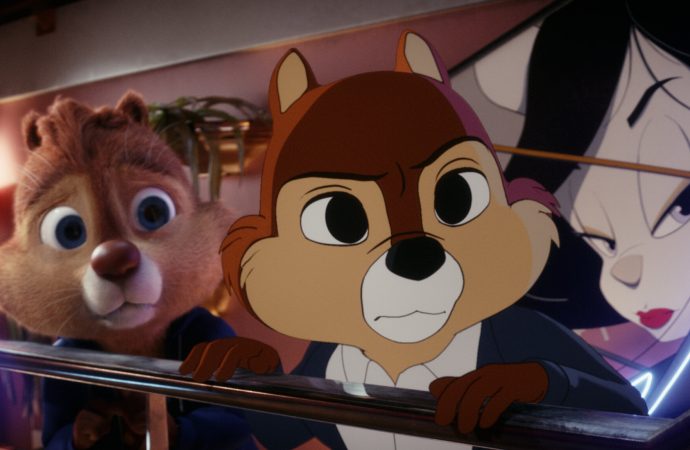 I cuddled up with my kids and a full plate of dinner for movie night and it did not sit well with me. Not because I didn’t enjoy it, but because I’m an independent filmmaker – and the rights and clearances attempted this movie practically gave me a panic attack.

From Roger Rabbit, the Three Little Pigs, Baloo, My Little Pony, Pumbaa, to South Park and Big Mouth characters, I was overwhelmed by the amount of work those producers had to do to make this happen. I love that this was made, I think the script is great, the story works, yes – all of the elements are fantastical and work out – but it was not an enjoyable watch for a filmmaker and a parent. My kids NEVER stopped asking questions – thank Disney it was released at home, there is no way my kids wouldn’t ask 1,000 questions in the theater!

Half of the issue is not that this movie seemed impossible to make, but that these references spanned so many different age groups. I imagine a studio would say that this type of cameo strategy means that every age group is included, but it feels more like a pain for parents to stop the show and explain to kids the varying level of references that aren’t relevant or really something kids can grasp.

The cameos were all over the place.

“…Maybe the most insane cameo within all of Rescue Rangers comes early on with the appearance of “Ugly Sonic,” the original Sonic the Hedgehog model with teeth that scared audiences. Voiced by Tim Robinson, Ugly Sonic almost plays like an I Think You Should Leave character, acting like he is in on the joke of how weird he is, coughing and wearing an ill-fitting jacket, and bragging about his upcoming show he’s making with the FBI, “Ugly Sonic, Uglier Crimes.” Sonic might go fast, but Ugly Sonic goes sloooooooooooooow.

In the first ten minutes with Ugly Sonic, Rescue Rangers shows just how ridiculous the cameos in this film can get. Even more surprising is that Ugly Sonic comes back multiple times throughout the film, aiding Chip and Dale in their hunt for missing toons. Is it possible this could lead to an Ugly Sonic spinoff film? Who’s to say, but we’ve got our fingers crossed….“

If you know the controversy around Ugly Sonic (explained here by POPCRUSH), then you already know that children 12 and under likely have no idea who or what that is – it’s confusing.

The trivia is wild.

As a filmmaker, I struggled to grasp and understand the choices made here, explained by “Universal Tweets Savage Response to Zack Snyder’s ‘Batman’ Joining Disney” by Alex Lue:

The Disney Universe just broke open with Chip n’ Dale: Rescue Rangers (2022), featuring Zack Snyder’s Batman, and Universal Studios has the perfect response….Chip n’ Dale: Rescue Rangers is a smash-hit on Disney+ that not many fans expected to be filled with countless easter eggs and even nods to other franchises, including Spider-Man Miles Morales from Warner Bros. and Paul Rudd’s “Aunt-Man” in the MCU….

In a twist of events, Ben Affleck’s Batman from director Zack Snyder’s Batman v. Superman (2016) and Zack Snyder’s Justice League (2021) made a significant and game-changing appearance in the film:

A shock for many, Ben Affleck’s Bruce Wayne/Caped Crusader is officially a part of Disney canon. Even Universal Studios can’t believe it:

…Batman and the DC Universe of superheroes are officially a part of the Disney canon, crossing over crazy theories that one day The Walt Disney Company might purchase the rights to Superman (Henry Cavill), Batman, Wonder Woman (Gal Gadot), and more.”

Layers upon layers for parents to explain.

And another thing I had to break down for my kids was the villain. Minor **spoilers** ahead:

“When the writers were considering child cartoon characters who might be appropriate for the storyline, Peter Pan was an obvious choice. The fact that he’s a Disney character also made things easier, since the filmmakers didn’t need to go through lawyers to license his appearance in the movie. But another very popular character was strongly in the running for the film’s Big Bad.

“I will be honest, we also had a version that we played with that we did not have the rights to yet and never attempted to [get],” Schaffer says. “That was a grown-up Charlie Brown.””

Having to pause, yet again to explain what happened to the villain and the metaphor it represents about Hollywood, child stars, and the idolatry of youth. No, I did not want to go into all that, but this movie prompted all the questions. But watching it alone with my peers, would have been a treat.

This movie is best enjoyed with your brain turned off and no kids around.