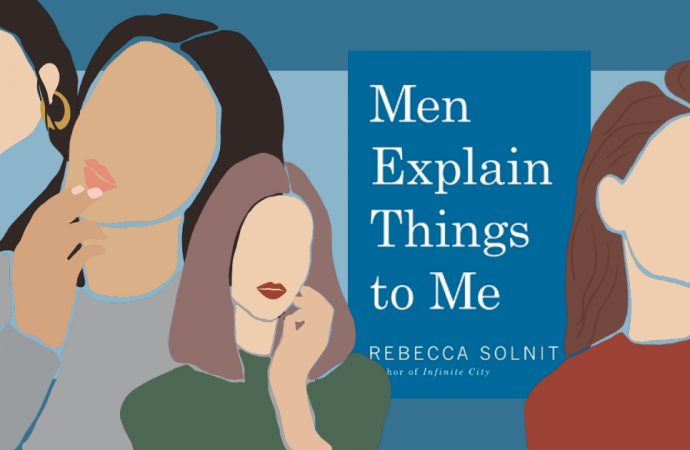 Men Explain Things To Me

It is never too late to pick up this tiny yet mindset blowing book. I loved it so much that I placed it into the “To Re-Read” pile. AND the “Gift To Others” pile, too. There is something new to explore in re-reading every few years. Akin to a previously beloved Better Homes And Gardens Cookbook or an Etiquette Manual from a bygone era or a treatise of political leaflets passed around the cigar room, this book is the perfect gift for any person of any gender or age in your sphere.

A collection of essays, short and sweet, learn more HERE:

“In her comic, scathing essay “Men Explain Things to Me,” Rebecca Solnit took on what often goes wrong in conversations between men and women. She wrote about men who wrongly assume they know things and wrongly assume women don’t, about why this arises, and how this aspect of the gender wars works, airing some of her own hilariously awful encounters.

She ends on a serious note— because the ultimate problem is the silencing of women who have something to say, including those saying things like, “He’s trying to kill me!”

This book features that now-classic essay with six perfect complements, including an examination of the writer Virginia Woolf ’s embrace of mystery, of not knowing, of doubt and ambiguity, a highly original inquiry into marriage equality, and a terrifying survey of the scope of contemporary violence against women.”

“[Solnit’s] ability to make a landscape into a text is present in every piece of writing she’s ever done, and especially here. Solnit understands that our minds are also landscapes, that they are uncharted territory and we must constantly have something left to discover within ourselves. When men explain things to me, personally, it’s like feeling someone else draw up the borders of my brain. When “men explaining things” becomes a concept, we react so strongly because it’s a map that we can use to bring us back to ourselves. The terrain has always felt familiar, but Men Explain Things To Me is a tool that we all need in order to find something that was almost lost.”
—National Post

“Where opponents would argue that feminism is humorless and superfluous, Men Explain Things to Me is a compelling argument for the movement’s necessary presence in contemporary society. It approaches the subject with candor and openness, furthering the conversation and opening a new Pandora’s box that’s apt to change the way we talk about women’s rights.”
—Shelf Awareness

“It is feminist, frequently funny, unflinchingly honest and often scathing in its conclusions.”
—Salon

“A necessary read in these fraught times. Starting with the title essay, which went viral and inspired the ever-useful term “mansplaining,” Solnit writes powerfully about the ways in which power is wielded in today’s society, and brings awareness to the staggering inequalities that we wrestle with on a daily basis.”
—FlavorWire

From Paul Bryant, “This book is so depressing that I had to read this one at the same time to prevent me from spiralling down into despair. You may have heard of the title essay, which is funny and deservedly famous. But in the second essay the floor suddenly drops away and we’re falling into the vile pit of misogyny. The second essay is called “The Longest war” and is about men hating, silencing, injuring and killing women. Ah misogyny, men hating women. It’s like oil – every time you think we may be running out of it vast new reserves are discovered…“

From Amy, “I’ve read this essay and others by Solnit all prior to their inclusion in this slim little tone with the exactly right-sized lettering on its cover. I am hugely adoring of her writing, so this review is less about the essays themselves (all fantastic) than the fact that it is a discrete volume you can, and should, be toting around in public. Ladies, read it on the subway.…“

From Patrick Brown, “The titular first essay is required reading for humans, especially men. I enjoyed (is that the right word?) the rest of the book as well, though I felt the essays were best when they were most direct. My only quibble with the book is that the essays weren’t meant to appear together, which led to some unfortunate repetition, right down to quotes from primary sources that appear in multiple essays. Still well worth the time. One note: The best part about reading this as a book? No comments section. You forget how great it is to read someone’s ideas without a chorus of nutters shouting at them from the comments.”

Who is Rebecca Solnit?

“Writer, historian, and activist Rebecca Solnit is the author of more than twenty books on feminism, western and indigenous history, popular power, social change and insurrection, wandering  and walking, hope and disaster, including Call Them By Their True Names (Winner of the 2018 Kirkus Prize for Nonfiction), Cinderella Liberator, Men Explain Things to Me, The Mother of All Questions, and Hope in the Dark, and co-creator of the City of Women map, all published by Haymarket Books; a trilogy of atlases of American cities, The Faraway Nearby, A Paradise Built in Hell: The Extraordinary Communities that Arise in Disaster, A Field Guide to Getting Lost, Wanderlust: A History of Walking, and River of Shadows: Eadweard Muybridge and the Technological Wild West (for which she received a Guggenheim, the National Book Critics Circle Award in criticism, and the Lannan Literary Award). Her forthcoming memoir, Recollections of My Nonexistence, is scheduled to release in March, 2020. A product of the California public education system from kindergarten to graduate school, she is a columnist at the Guardian and a regular contributor to Literary Hub.” More HERE