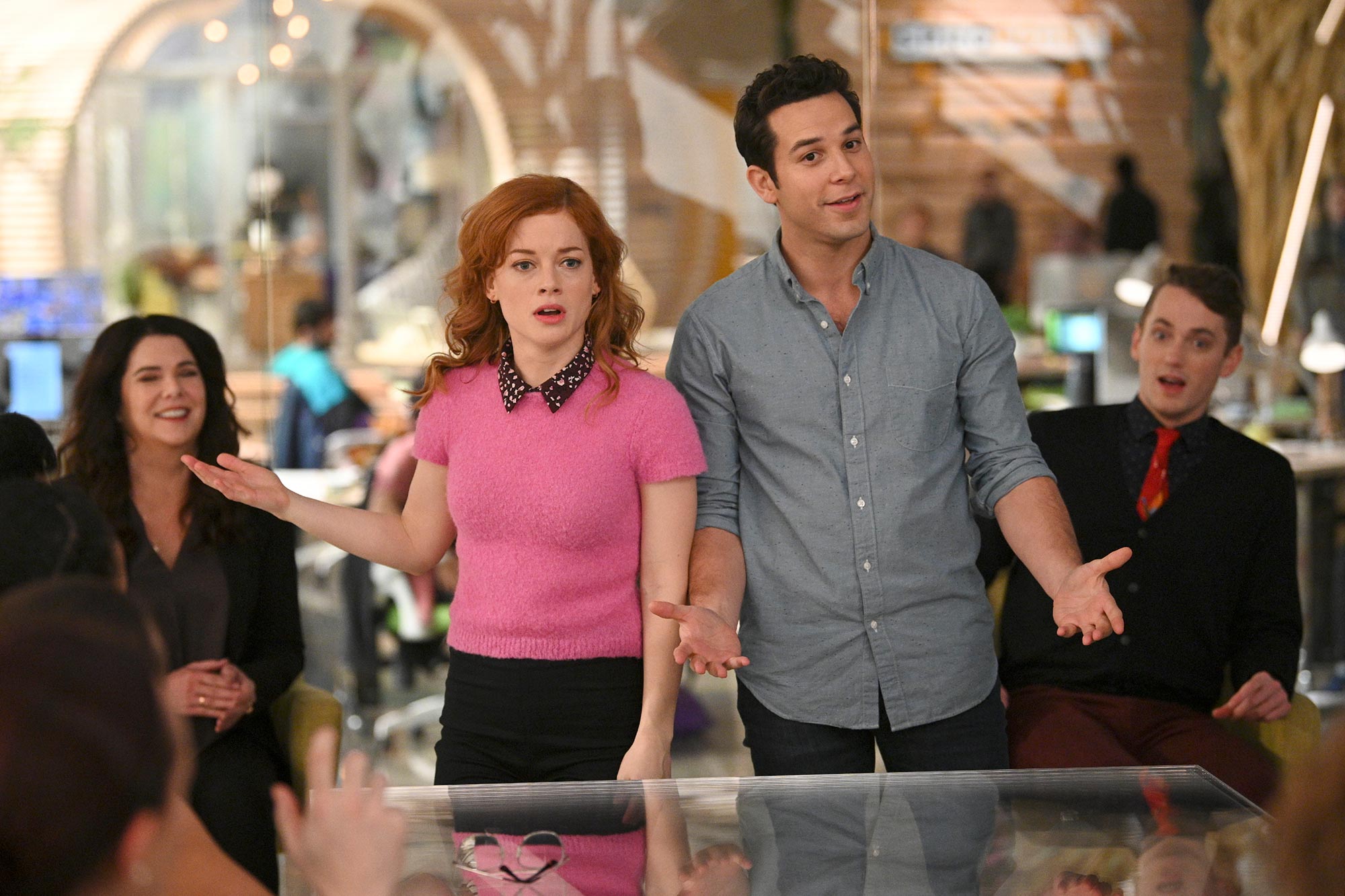 Season 1, Episode 8: After receiving heartbreaking news, Zoey suffers a mysterious “glitch” in her powers. Which is an understatement. She is SINGING against her will in real life situations! The horror!

My partner sets the recording on our DVR. He tends to delete shows after we watch …unless something special happens and we need a repeat viewing later. He will turn on an old episode of a show and we’ll laugh our tushes off and then he’ll reset the scene and save it to uncover at a later date when we need a laugh. There is an episode of ZOEY’S EXTRAORDINARY PLAYLIST that is the funniest episode of all of television. This is not hyperbole. However, you need to watch the series to really understand WHY this is a hilarious moment.

Zoey/Jane Levy‘s comedic physical style is barely showcased in this series where she needs to connect the winding emotional thread of all the performers around her (until this episode). Occasionally she gets to join in the fun. But because of the realities of the world in which the show is placed, she doesn’t often get to really LET LOOSE. No matter what, she is the straight man character. Her wit is phenomenal, her authenticity shines, and her big caring heart makes the show an absolute joy to watch.

Max/Skylar Astin is a dreamy talented powerhouse that pulls out a top broadway performance number EVERY SINGLE EPISODE. The entire cast is incredibly powerful and oh so talented that it exposes the lack of true talent other TV shows showcase all the time. Simon/John Clarence Stewart is charming and energizing, Maggie/Mary Steenburgen is surprising and soulful, Mo/Alex Newell IS JUST PHENOMENAL, and Mitch/Peter Gallagher shines in the most emotionally powerful role of his career. Hiring truly trained and masterful artists makes for great TV whether or not they are singing a hit tune in an enchanting arrangement or performing the most unique emotional choreography. This show is really a feat of class, artistry, and pure fun.

CONTEXT for the most hilarious episode!

So, in this show, Zoey wakes up with the extraordinary ability to hear heart songs from people around her, friend or stranger. She gets a glimpse into their inner life in the most wonderful way: SONG! But, Zoey is not afflicted with the curse of joining in, she watches in mostly horror and then slowly has progressed to wonder. When the heart songs are sung to her, they are beautiful and composed and choreographed perfectly. But… one episode brought us the most hilarious problem: ZOEY SINGS HEART SONGS THE WHOLE EPISODE. But, and here is the best part, hers are happening in real time with no musical accompaniment. She has no control over these outbursts and no way to stop until it’s done. And no one in her life except Mo/Alex Newell Max/Skylar Astin, even knows why it’s happening to her, so it is a very confusing life altering mess of a situation. Very embarrassing. And it’s TV GOLD!