Find Time To Spread Your Dragon Wings With MYSTERY 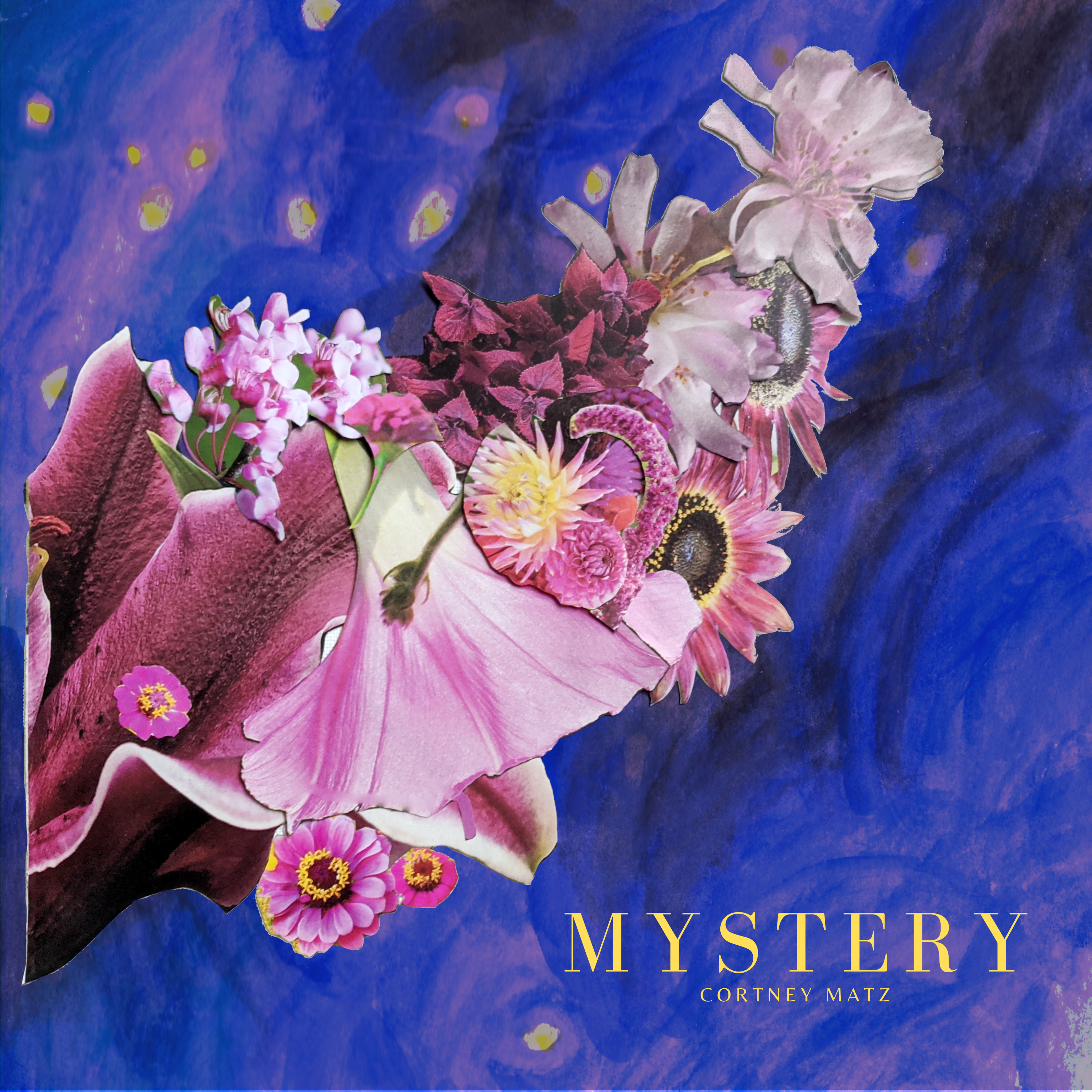 The first track, “Pyrite Road” is my favorite, it brings my heart back to this past December, walking in the deep woods near a small town in the Ozarks. Painful and empowering. The rest of her album lifts me up, though I never shake off the melancholy and twisting in my chest. Click and enjoy today. You’ll want to sit down and prepare to listen to the lyrics and if you partake in alcohol, go ahead and pour one *just in case.*

After I asked Cortney Matz about what brought her to LA, I quickly figured out why she’s perfected the simple storytelling that brought me so clearly to a time and a place, she has a background in screenwriting.

Cortney Matz: “Moving to Los Angeles became a goal in the early 2000’s while I was working for a production company in DC. I got to write my first screenplay for them and was exposed to the art of filmmaking in a very compelling way. I had never really considered making movies before then, but once I got a taste I was hooked! I spent a week in LA in 2004, taking meetings and getting the lay of the land (as much as you can in a week while commuting from Long Beach). I was equally intimidated and drawn to it. I was too scared to move right away, but determined to go home and work on my writing, come up with a plan and apply for some writing programs. For a number of reasons, that plan got jacked up. I did continue writing pretty seriously, taking classes and submitting my work for feedback. I LOVED reading screenplays, and they are still one of my favorite sources of entertainment. If you’re noticing that none of this relates to music, I’m not surprised! Music was nowhere near any plan or dream I had – which is ironic because I was constantly making it.”

“Miracle” (track 3) really gets me, too. This is when I stopped and sat down to absorb what was happening. Her piano lulls perfectly and her voice takes me by the hand and leads me down a path. I was mesmerized. This is when I found myself reaching over to turn it up. I wanted to feel it. Goodness, I miss live music and I want to hear this one live as soon as I can. I’m also a singer, so you know I started singing the ending with her. You’ll see. Singers will get why it’s very inviting.

So, how has Cortney Matz unlocked this beautiful album? Where did it come from?

Matz: “At the beginning of 2020, I had a nice little goal to record some of my more story-oriented songs and make a short collection, what you call an EP (5 or 6 songs). My songs tend to roam the gamut of human experience, but a few of them were basically short stories with a tune. Stories are such a vital way of processing emotion, and it made sense to me to put them together and make that the focus of the album – the stories that will help you grapple with the day-to-day mysteries of life. As we got deeper into The Year That 2020 Became, I had been knocked completely off my intentions for music. Somewhere around September I remembered that goal. Was it too late? Only one way to find out.”

Often times, I’ll discover a musician and then begin following them online and slowly get to know them. I have actually already know Cortney for a few years and have had the chance to talk with her only a few times. She was an open book for this interview and I was able to learn more in this review process than I had learned in the last 4 years! I wanted to know so much and she delivered!

Matz: “Recording music as it is now expected to be recorded is ridiculously expensive – even for a solo artist who plays her own instrument. I have never made enough money from playing music to justify spending massive dollars on recording, mastering and releasing it. But I have so many songs, I’m just trying to get them out there. And I’m really proud of what has emerged. Creativity is generally helped by limitations rather than hindered, and it’s fun to take what resources you have and make the most of them. The point is to serve the listeners, and if they can’t hear the songs than no one is served.”

Her LA love letter in “The Ponderosa Trees” (Track 6) gave me energy, I was able to get up and start making dinner with a sway. I love a good piece for dancing, so I grabbed one of my kiddos and waltzed a bit. It felt instantly nostalgic and incredibly romantic. I live in the heart of Hollywood just a few blocks from where Cortney has hosted a weekly music writing gathering since 2016. This piece felt like I was there among a group, having a cocktail on a warm musical Hollywood night.

Matz: “I LOVE MY Epiphany Space community! After that 2015 awakening, I began meeting other songwriters and musicians – who knew LA was such a music town? Everyone. Everyone knew that, but I didn’t. I was so green, I had spent my entire career learning the film business so all I knew was that indie musicians needed help building their careers and I wanted to help. So I started a monthly open mic in the Epiphany Space courtyard (shout out to our director Melissa Smith who has given me all kinds of permission to try stuff). It was not very popular, but I did it every month until January 2017, when a stranger called to ask if we could just get together and jam. …We wound up with a weekly songwriter gathering (sometimes a group, sometimes just me) where musicians of all levels could play a work in progress and get our reactions to it. Thanks to that regularity, I was able to try out a lot of songs on a very friendly audience and just see how they landed. I’ve been thinking about that a lot this week as I’ve listened back through the album – I have distinct memories of playing some of these songs for my Monday night songwriter group first. And the things they responded to, that they clicked with – it gave me confidence to keep working on the song. I’m a believer in safe spaces to share works in progress. This is a hugely non-critical place – you have to have room to be terrible. And since I never gave myself a chance to be terrible for so many years, I never knew that I could be good. So that’s a value I’ll always have.”

When Courtney was working on this album in late 2020, she brought her initial 14 songs to her Patreon community and asked them to weigh in before she finally settled on these 12 tracks for MYSTERY. It takes a great deal of trust and mutual admiration to work in this way, she is incredibly collaborative even as a solo singer/songwriter.

Matz: “Noel Molenda agreed to engineer this for me, and he and I worked together on my Christmas album (Come Love). He’s so laid back and is amenable to my recording style. From our first recording session, he was so skilled at capturing the live piano as well as my voice (I have a really hard time NOT singing while I play), and he made it so comfortable for me to be able to see around all the recording gear. A lot of times the microphones can intrude on my physical space and make it hard to sit properly or glance down at my hands. So I got hooked on Noel right away, and whenever I have a live recording situation he’s the first person I ask. For MYSTERY, Noel was willing to come to my studio and capture my “Miracle Piano” – a baby grand that fell into my life last summer for the price of delivery. I consider it my birthday gift from God. It was important to me to record this album on that piano, and Noel very kindly packed up all his gear and set it up in my space.”

Every musician has a specific way they work. And some artists continue to evolve how and where they find inspiration. I melted into her album and found myself unable to hear what was going on around me. I was pulled in. I asked Cortney how she writes, her specific environment where she creates the magic.

Matz: “I’m gradually loosening up. Music is so vulnerable, it’s hard to get into that groundbreaking space if there are people around. Knowing that someone can hear me or that I might be interrupted is a deterrent, but I’m learning (mostly through necessity) to let go of those concerns and create my own bubble. But it’s always a treat to have a whole space to myself and be able to sing my heart out without worrying that anyone will hear my half-formed thoughts or wild non-rhymes while looking for what it is I’m really trying to say.”

After a full listen of MYSTERY, I felt powerful, the aching in my chest disappeared. I felt like I had just had a good cry but now I had the strength to take on the world. I don’t know if is was renewing because the storytelling kept me present or if the soothing ups and downs gave me time to relax my anxiety. Either way, set aside the time to absorb and walk away feeling tall.

I love to ask musicians about their favorite lyrics and Cortney’s lyrics were just too hard for me to choose from, there is SO MUCH THERE, so I was glad she participated in the fun:

Matz: “The ones I’ve been quoting most often lately are, “Anyone can tell you those wings weren’t meant for sitting still.” Taken from track 12, “Dragonsong.” It’s about a dragon that hasn’t figured out it can do dragon things yet – like breathe fire and fly. I love the simple logic of it: if you have wings, use them. Maybe you need some practice, but you’ll never get the hang of it without that leap. The concept applies to a lot of interests and skills in our human lives. If you have ideas and vision, you’re going to venture into uncharted territory. It’s risky business, but the alternative is never becoming who you were literally designed to be.”