How To Humanize The Most Painful Of Cautionary Tales 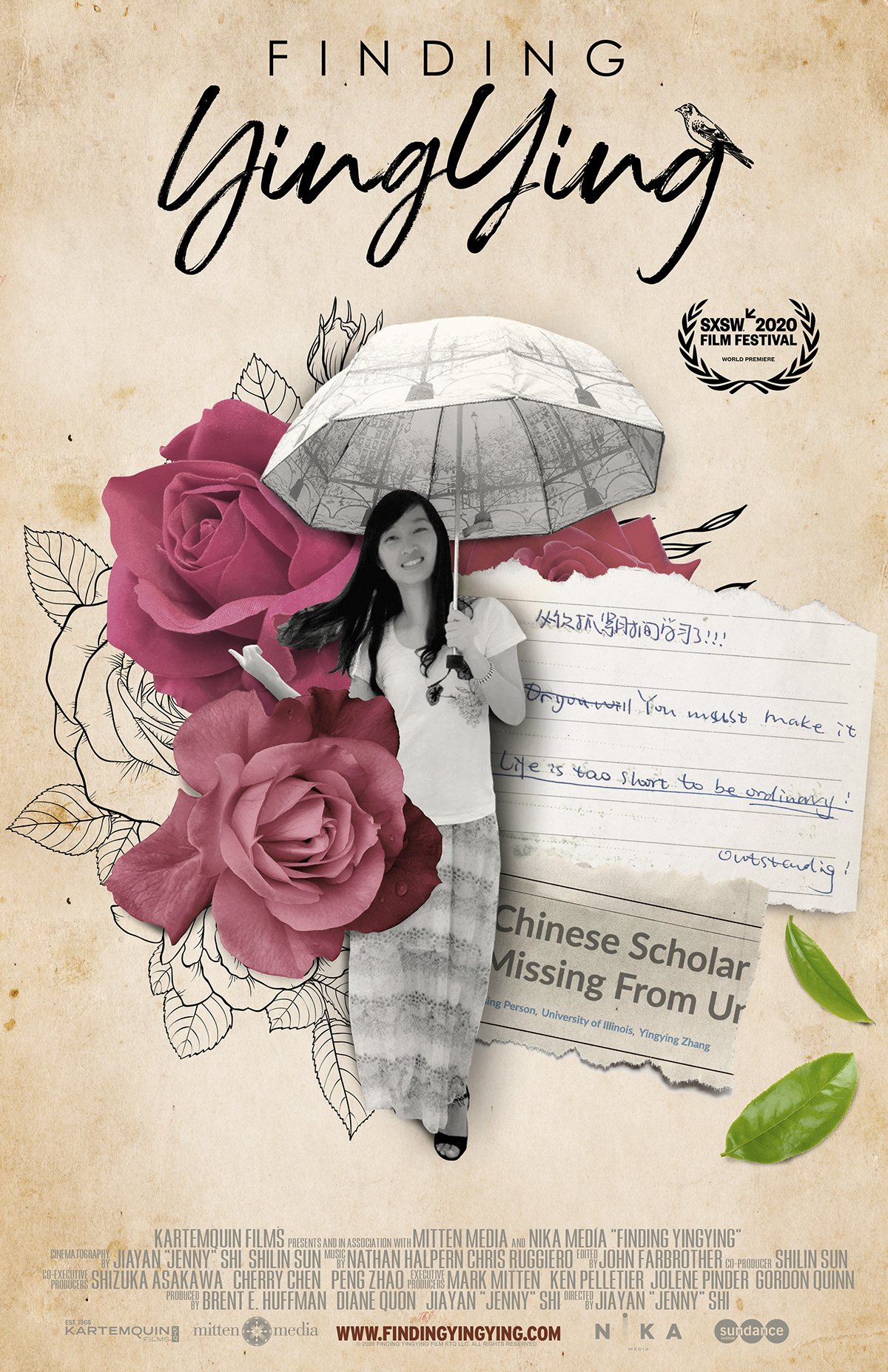 While finding frustrations in the legal system, in the University where Yingying attended school for a mere 6 weeks in the US, and in the lack of societal support for families undergoing painful public journeys, I am thankful for the work and commitment of filmmaker Jiayan “Jenny” Shi to immortalize 26-year-old Yingying in this way. I am in no way surprised that director  Jenny Shi as well as Academy Award nominated Producer  Diane Quon‘s (MINDING THE GAP) documentary premiered at SXSW, landing a Special Jury Prize. I’m proud of MTV Documentary for picking up and releasing this film, hitting virtual theaters on Friday, December 11th. IndieWire named director Jenny Shi as one of 20 Rising Women Filmmakers You Must Know and I couldn’t agree more as her patient storytelling is simple and unexpected in the best way.

“Finding Yingying” won the SXSW Special Jury Prize for Breakthrough Voice, as well as Best Documentary Feature at the Middlebury New Filmmakers Festival, and follows a Chinese family unraveling the mystery of their daughter’s disappearance from a college in America. The film’s director, Jiayan Shi, was just chosen as one of Sundance Institute’s Women at Sundance and Adobe Fellowship recipients, which supports women artists creating bold new work in film and media.

Director Jenny Shi paces this mysterious disappearance to walk us through the very important steps it takes to understand the scope of the event. Her unique relationship to Yingying and the growing relationships with Yingying’s family give her access that no other person should ever need access. The most private and intimate family moments are captured in ways impossible to reveal otherwise. Jenny Shi’s patience is effective, her point of view and personal stake real without taking away from the narrative. I needed to know what happened next.

Director Jenny Shi: “Yingying’s story is special and important to me because I saw myself in Yingying’s experience – being lonely and homesick in a foreign place while pursuing my dreams. Moreover, when we think about a case like this, the media is likely to focus on the crime, investigation, or the perpetrator. They forget about the people left behind in the tragedy – and the person labeled only as the “victim” becomes dehumanized. I hope after the audience watches the film, they walk away with the image of an extraordinary woman who had a wonderful life ahead and the impact of such a sudden loss in the community and everyone around her. I also hope FINDING YINGYING can help change the narrative of crime stories nowadays.”

Originally from Shanghai, Jenny Shi is a Chicago-based documentary filmmaker and video journalist. She has a unique point of view exploring the differences in our justice systems and cultures while staying completely engulfed in Yingying’s family’s lives. When I take a moment to really evaluate the pivotal storytelling element of Yingying’s diary in the documentary, used to reveal the character of Yingying and her frame of mind while living and working in America, I see how Shi cared deeply for her subject, really, her friend. Shi saved Yingying’s most hopeful personal diary entry until we needed to hear it most. Crafting an emotional journey out of years of filming on and off is incredibly difficult and Shi delicately handled our hearts. Jenny Shi took her time with Yingying’s humanity and doesn’t let Yingying become a cautionary story we tell young women to scare them out of living extraordinary lives. I had the pleasure of reaching out and asking director Jenny Shi about her work and where she is going next.

Shi: “I came to the U.S. in 2016 and studied at Medill School of Journalism at Northwestern University. As a student journalist, I covered the aftermath of the election, which drew me into social justice issues regarding people of color. I witnessed a fearless and confident undocumented girl stand out to rehabilitate immigrants’ reputation when Trump cracked down on the undocumented immigrant population. I learned the history of the federal government’s controversial “relocation program” on Native Americans as well as the shocking fact of how few education resources urban Native American children have. I gradually understood the meaning of forgiveness and appreciation when I saw a young Latino activist, who grew up in a family once involved in gangs, on a quest for peace in his community. Through the lens of my camera, I created many stories that broke stereotypes and empowered minority groups.

In my last quarter at journalism school, I started to follow a Chinese family’s journey searching for their daughter and seeking justice in the U.S. The project eventually became my first feature documentary FINDING YINGYING. While I was working on FINDING YINGYING, I was selected to be a fellow of the Diverse Voices In Docs program at Kartemquin Films in 2018. Kartmequin Films is a documentary production company in Chicago and has been around for over five decades. They’ve been supporting many emerging filmmakers of color, so I got a lot of guidance and resources through the fellowship, which eventually helped to bring FINDING YINGYING to the world.

As an Asian female filmmaker, I’m also part of A-Doc and Brown Girls Doc Mafia, two amazing organizations that empower diverse voices. Currently, I’m a fellow at the Women at Sundance Adobe fellowship and continue my journey as a truth seeker and creative storyteller.”

This is a tough year to release your directorial debut documentary to the world. So many unknowns and completely new publicity structures and viewing habits, Jenny Shi and her team have pressed on to meet these opportunities with hope and we can finally see FINDING YINGYING in the comfort of their homes December 11th.

Shi: “2020 is quite different from what I expected. I was hoping to have face-to-face conversations with the audience at film festivals. However, the world premiere of FINDING YINGYING was canceled and I’ve been staying home since March. Distributing a film during a pandemic is challenging, but I learned a lot from this experience. I met many filmmakers in virtual spaces and brainstormed about creative distribution and audience engagement. I also attended many virtual forums and panels that I wouldn’t have had the chance to attend in a normal environment.

On top of that, I finally have time to watch many classic documentaries and to think about my long-term career path. I’ve been asking myself what responsibilities I need to take on as a filmmaker and what kind of stories I want to tell. I’ve witnessed how the Chinese community has suffered from sinophobia and racism this past year, which were deteriorated by the misinformation of COVID. As a Chinese filmmaker based in the U.S., I have the knowledge of both countries and cultures and the capability to fill the gap caused by misunderstanding. I will continue telling stories related to my own experience and identity, and increase the visibility of the Asian community in the U.S.”

See more of her work and follow Jenny Shi’s career: