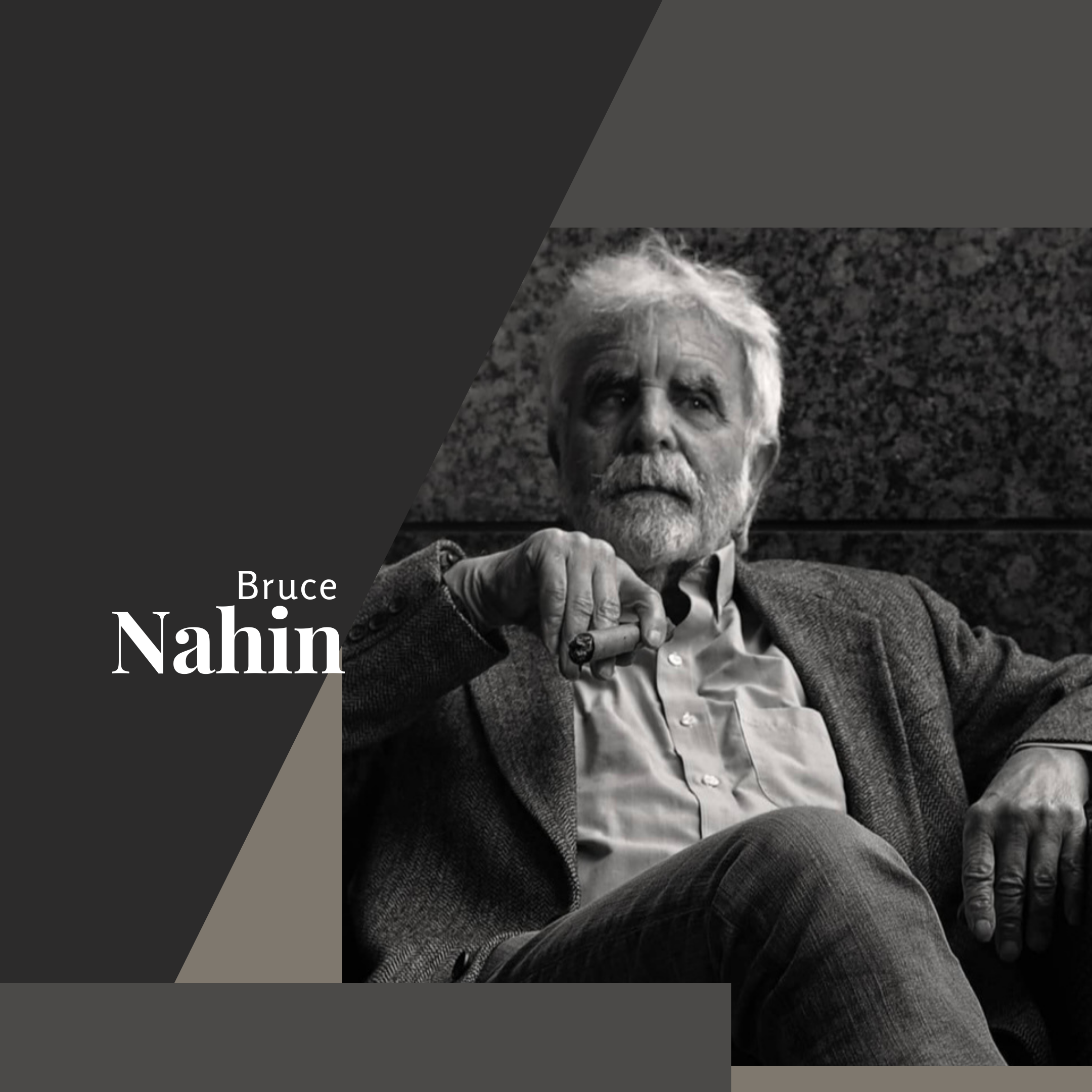 An interview with Bruce Nahim.

Sometimes the best things come from the most unlikely places. Every success story is told with a guiding hand. The man behind the curtain for many is Bruce Nahin, co-founder of the World Famous Chippendales Dancers—now a teacher, producer and mentor for young filmmakers. Needless to say, his history is colorful and extensive. He worked backstage for a major concert promotor in Los Angeles during the early 1980s. The City of Santa Clarita appointed him as one of the two founding film committee members for the newly formed city where Nahin established himself in the fields of film permits, set logistics and site management. He was instrumental in the establishment of the City of Santa Clarita as the major area for filming in Southern California. He practiced law for almost thirty years with an emphasis in Entertainment law, especially in music and live entertainment. In the 2000s, Nahin transitioned to become an executive producer, business affairs and a development producer in films and television. He also acts from time to time. He is no longer a member of the California State Bar, nor a practicing lawyer. Nahin became a co-founder of Janick Entertainment, a film production company specializing in quality female-empowered independent films. Nahin is also a partner in Entertainment Support Services, a firm providing Consulting in Production, Development and Business Affairs to Film, TV and Music. He loves mentoring young people in Film, TV, music, live entertainment and modeling, and is involved in One Church LA, a church established to serve young Hollywood. He also lectures at various film schools in the Southern California area. He is a member of the Producers Guild of America, The Television Academy and SAG/AFTRA.

Can you tell us why you went into show business?

My first job in the entertainment industry came to me purely by chance. Tom Hayden was running for the US Senate here in Los Angeles, and most of the people working on the campaign were from out of town. So, they were looking for somebody who knew Los Angeles, and it turned out his wife was Jane Fonda. As the story evolved, Jane used me to do driving—for herself, Jon Voight and others—and that was my first introduction to Hollywood. When I was studying for the bar exam, I was studying at a nightclub in the mornings before I went to school or did other things.

Was law school a good experience?

I went to school at Loyola University in Los Angeles and before that, UCLA. Law school was a lot of fun. It was intellectually challenging. I met some really tremendous people, a few I still stay in touch with. Learning intricacies law, it’s kind of like memorizing an encyclopedia. Doctors go through the same kind of training where you learn to take facts and apply them to different situations, new situations. Basically you have to find the issue and then the rule, and then you have to apply it and come up with a conclusion. It was all challenging to me. I thought it was fun, like doing puzzles.

Can you talk about Chippendales and how that began?

When I was in law school, I was living with a young lady in West Los Angeles. We had periodically gone to a local discotheque called Round Robin. Round Robin was purchased by a guy named Steve Banerjee and he changed the name to Destiny II, and it was at Destiny II that I was studying for the bar exam. During the day, when the janitor was cleaning up and stuff, I gave him a few bucks. And one day, the gentlemen who was the new owner, who I came to know and befriend, told me that his partner wanted to sell his interest back and he needed a lawyer, but couldn’t afford a lawyer. That was good because I wasn’t a lawyer, so I worked for him on that escrow my father and I did. Some months later, he realized he was cash poor having done that, and my dad and I arranged for us to buy 10% of the club.

Were you surprised at its success?

I honestly thought when I heard the idea in 1979, that it was the stupidest thing I’d ever heard of in my life. We were trying to fill the club. The club was busy on Wednesdays, Fridays and Saturdays, but dead most the other times. We were doing mud wrestling. We were doing dinner theater. We even had Frank Sinatra Jr. sing there for some number of days. Whatever it took to fill the seats. On the off dates, we were just basically a discotheque in a backgammon club. On Mondays, Tuesdays, Thursdays and Sundays, nobody was in the party mood. It was Wednesdays, Fridays and Saturdays only. So, it came to us by a guy named Paul Snider to try this male striptease, kind of like a gentleman’s club, a bar or whatever you call it. It started taking off and it grew, kind of like The Blob. It just kept overtaking everything at the club, and we finally found ourselves doing male exotic dancing five or six days a week. We were not so much a discotheque anymore, although we did that after 10:30 at night.

Chippendales has had a very dark, wild history behind the scenes. The success came at a price.

Chippendales was a curse of sorts. There were a lot of people who died in connection to Chippendales. One of our dancers, a guy named John Gibson, who was engaged to Vanna White at the time. Incidentally, ironically, I did both Pat Sajak and Vanna White’s first contracts for Wheel of Fortune, they didn’t know each other, and they came to me separately. John died, and then later on Nick De Noia was killed. I was supposed to be killed, but I wasn’t. And then later on, my partner Steve would arrange the murders, was arrested and found in his cell dead one morning.

Why did he try to have you killed?

He was a narcissist who wanted to control the whole show. I had a percentage and he tried to take it all over.

You segued into Production Development and Affairs. Why did you make that transition?

In 1987, I was asked by a new city in North LA County to become one of the first film commissioners, and I really liked the film business. And then I discovered I was really good at it—both from a producer’s point of view, as well as from a legal point of view. I had the knack to be able to combine both skills, become a good executive producer and a good production council.

What are some of your projects that stayed close to your heart over the years?

I love working with filmmakers—mentoring and teaching—and I’ve mentored a lot of rather famous people. I audit many film schools as a guest lecturer. I think trying to be the person I needed when I was younger is the most rewarding. I mean, I’ve done a lot of movies. I think I have three or four hundred IMDB credits. Mentoring is really what I would like to be my legacy.

How exactly do you mentor young filmmakers?

If they’re local to LA, we meet in person for coffee. Periodically, I go to where they are. There are some producers who retain me to mentor them through their first production and we meet, we talk. I help them with templates, contracts, give them direction, and the following week we discuss where they’ve been and where they need to go for the next week. Like the old story, how do you eat an elephant? The answer is one bite at a time. So, I do that for them. If they’re a student, we do a lot of talking, a lot of meetings, a lot of career coaching, life coaching, try and refer them to people, connect them with people, and I do the same thing with people on the telephone. The young producers pay me a fee to help produce their movie, a monthly fee, the kids who are in school who just need guidance, I do it pro bono.

What future projects would you like to talk about?

We have three projects here that are pending. We have a musical based in Napa California. We have an acrocentric time travel TV series that we’re developing, and then I’m doing a definitive work on a famous evangelical pastor of the 1800s. I can’t give you more specificity than any of that right now.

How do you choose a project?

They choose me. Generally, a producer will call me with an idea and if it seems intriguing, I do it. If it seems challenging, I do it. Again, most of my projects are with relative newbies in the industry and the ability, even in that professional setting to teach and mentor, isn’t far from my thoughts—even when they’re very wealthy people who have a desire to make a particular project. It happens to be that the three projects I’m on now have people with money and they’re able to fund their projects. They’re all challenging projects, but I also work with kids on their student films in film school to graduate. We’ll generally have to do what’s called a student thesis, which is basically a short. I love working with them on that. I’ve got one of those next weekend for three days for a young lady named Amber, and it’s as exciting for me to work on these small student films as 20, 30, 50-million-dollar movies.

Well, I think it’s the job of people my age and my experience to teach the next generation the art of filmmaking. The intricacies of filmmaking. It’s all relationship-oriented in our business. It’s who you know. Introducing them to people is always rewarding when you make a good connection. I want to be known more as a mentoring teacher than I am the founder of Chippendales.