If You Miss LOST, You’ll Love RAISED BY WOLVES 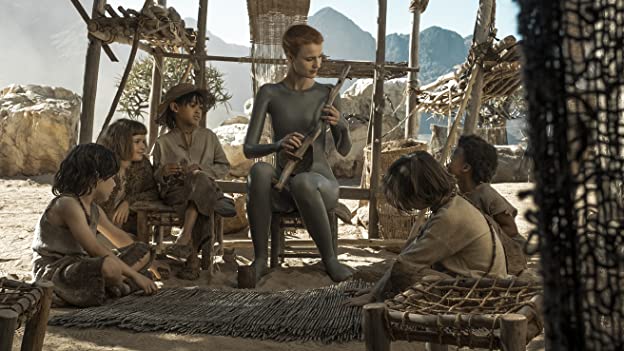 This is a **spoiler** filled mess. Run away if you haven’t finished the first Season yet. I believe several of my friends stopped mid-Season because they didn’t know what was happening exactly. I still don’t know what’s happening, BUT we just got a LOST sized Smoke Monster element thrown in and I HAVE to believe it is going somewhere. Right?

I love our main cast, so glad they didn’t die. But I can’t tell if the title refers to them or refers to the community of believers being such a terrible culture in which to raise children. But now that the atheist ship has arrived, are they gonna be the wolves we’re referring to? Or… and bear with me one more minute… are ALL of humanity’s options of religious, atheist, or artificial just damn plain bad ways to raise humans because humans are the issue? Or OR OR is this damned cursed planet the issue? You caught the “devolving” wrench thrown in that finale, too, right? The planet could be the element that is… who cares. Let’s talk about what we do know.

Amanda Collin (Mother) is phenomenal. She is truly carrying the burden of balance that no actor in my limited memory could manage. I believe 100% what is happening to, with, and through her. She is a powerhouse. This is the role to end all roles considered as ‘Mother.’ She is written to be incredibly instinctual and feral and completely artificial only breaths later. Abubakar Salim (Father) proves that this casting team must be up for awards, because Collin is not just an entire show in and of herself, Salim is a joy to behold too! This team is just so well cast. All 6 kids are handling deep work on an unusual set. The emotional toll on each child actor must be overwhelming. Niamh Algar (Sue) is unquestionably the most ‘normal’ (and I use that term loosely) type of character and she is still handed an Emmy quality character and she delivers every-every-every moment. The way these opposite yet mirrored ‘mothers’ who long for creation, revel in caretaking, but are previously trained weapons of destruction feels very personal to me. I get it. As a Mom, I approve of these wildly unusual portrayals of mothers and I agree with them as universal. I refer to this show as a workshop on motherhood. When Collins hides her ‘creation’ from Salim out of embarrassment or when Algar is confronted by Paul (her adoptive son), this show gives so much to chew on.

Every single one of these actors is living up to this extraordinary material with career defining performances and the bar is kept there the entire Season. This is a better show than LOST, better in every way, but I cannot help but compare the two since the audience knowing what is or could happen is just nowhere near the requirements list to write for this show. And the characters are just so easy to love or hate.

But, seriously, what the heck is happening in the show? I have no idea. I am staying because I love the acting and writing for these characters, but that trust is keeping me here. At no point do I ‘need’ to know what happens next, it’s the least predictable show on the market, so that’s cool. But still, I don’t care about the story, but I deeply care about these characters giving me more to devour.