It’s A Heavy World. Let Netflix’s New Musical A WEEK AWAY Lighten Your Day In A Fresh Way 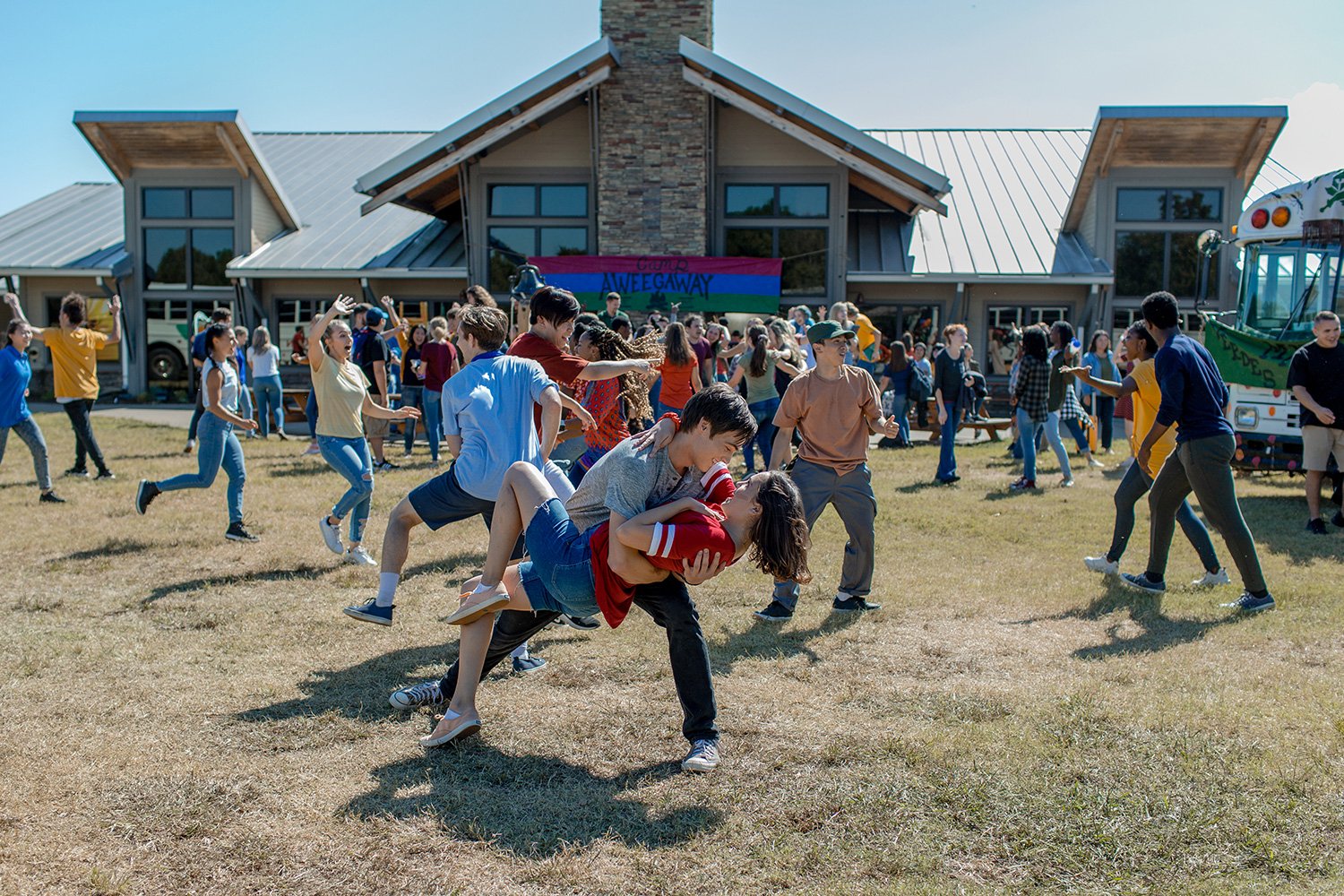 Did you go to camp growing up? How about church camp? And how do you feel about musicals? Let’s get specific: did you go to any youth group activity in the late 90s or early 2000s, and also enjoy any one of the three High School Musical movies at some point in your life? If you answered yes to at least two of those questions…then have I got a movie for you!

In March of 2021, Netflix released something of an oddball in its line up: A WEEK AWAY, a musical about Will (Kevin Quinn), a wayward teen at the end of his rope, who finds himself attending a church camp in a last-ditch effort to shape up before shipping out to juvie. Naturally, he immediately falls for the camp director’s (David Koechner) daughter, a bubbly but down-to-earth belle (Bailee Madison), who is enjoying the only week of the Summer that she doesn’t have to work. Will gets paired up with a quirky roommate (Jahbril Cook) who is too shy to ask out his camp love (Kat Conner Sterling), and needs Will’s help to overcome his insecurities. Of course the villain is a zealous and self-righteous overachiever (Iain Tucker), not to mention the ever-looming truth that Will isn’t who he says he is.

So that’s the set up. What do you think is going to happen? You’re probably right. And that’s okay, because A Week Away isn’t a heavy drama or intense murder mystery…it’s just good clean fun.

I learned about the film from watching an Instagram video of JOHNNYSWIM, who recorded a version of the title track for the film, “Best Thing Ever.” The band showed a trailer for A WEEK AWAY, describing the movie as High School Musical at church camp. My wife was a camp counselor at a church camp, and we both bonded over a late love for High School Musical early on in our relationship, so I knew we needed to see the film.

We weren’t disappointed! My wife and I watched the movie during an at-home date night (frequent during COVID quarantine) and immediately enjoyed it. Sure, it’s cheesy. It doesn’t even make a lot of sense (Will’s rap sheet includes stealing a police car and he is sent to church camp as recompense? Come on…) But again, that’s okay, because this movie isn’t about plausibility, but rather fun, honesty and second chances.

I was lucky enough to have the opportunity to ask one of the film’s leads, Kat Conner Sterling (pictured far right above), a few questions about the musical, which is her feature film debut. Fun fact: she was cast for the film without even receiving a callback, but based solely on a video submission! And I have to say that her story as the nerdy best friend, Presley, coupled with Jahbril Cook as her love interest, were my favorite parts of the film.

Sterling: “The most special song to me is ‘Good Enough,’ which is my main song in the film. I’m a quirky girl in real life just like Presley. I know the struggle of not feeling enough. So I was super excited to be a part of such a relatable and encouraging piece. The fans have really taken to it and it’s been so special to see all their messages about how it’s affected and helped them.”

Sterling told me she has been involved in musical theater since age 9, so I had to know her favorite dance number as well…

Sterling: “[It] either has to be ‘Dive‘ or ‘Best Thing Ever.’ ‘Dive’ because it just looks so cool with everyone dancing in the water. ‘Best Thing Ever’ is just the perfect finale piece and I love the choreo.”

What I didn’t expect watching the film were so many throwback songs from Christian Contemporary legends that I grew up with: songs like, “The Great Adventure” (Steven Curtis Chapman), “Place in This World” (Michael W. Smith) and “Baby, Baby” (Amy Grant). Creating modern versions of these songs were a fun way to introduce them to a younger generation, while also including their parents, who likely enjoyed them firsthand. My personal favorite cover in the film, however, was a mashup of “Awesome God” (Rich Mullins) and the more modern “God Only Knows” (For King & Country), in a campfire confessional circle that feels very familiar to anyone who grew up going to youth group. Check it out here:

I asked Sterling how she felt about the film’s impact, being somewhat of an oddity in today’s mainstream media, which largely overlooks faith-based films and musicals:

Sterling: “I think A WEEK AWAY really helped prove that movies like this can be done and they can be done well. We had an amazing cast and production team to make that happen and I hope it inspires more talented artists. We’ve certainly found a wonderful audience as well. What’s cool is that it’s not just a movie for the ‘faith-based’ community. It really takes different elements that reaches everyone. I’ve received so many messages from people coming from different walks of life that fell in love with the movie. That’s everything we could have hoped for.”

I echo what Kat Conner Sterling said about production value, and realized upon a second viewing of the film just how good director Roman White was for the project. With a career made up mostly of music videos (including Taylor Swift’s “You Belong With Me” — seriously, who doesn’t like that video?), he knows how to move the story along in quick, but completely coherent ways. He isn’t the first music video director to move into feature films, by the way, (anyone catch The Fall by Tarsem?), but A WEEK AWAY is good evidence that it works, and works well.

In summary, I highly recommend A WEEK AWAY to just about anyone, though you will likely enjoy it most if you have some background in church and/or camp. But even if that isn’t true, and you’re just looking for a modern musical with fun choreography, catchy songs and a great cast, you won’t be disappointed. The themes, the music and the comedy land well, making A WEEK AWAY something I’ll be watching over and over.

Listen to the soundtrack (including original versions of the throwback songs) here: