Laugh, Cry, And Cheer With My Favorite Film This Year: Everything Everywhere All at Once  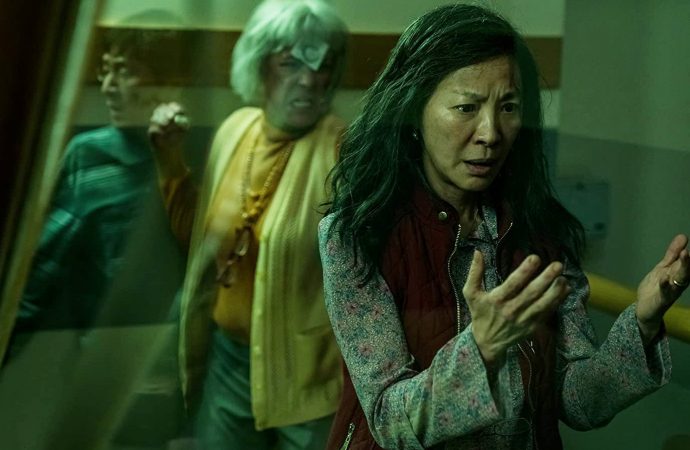 Have you seen it yet?

Written & directed by Dan Kwan and Daniel Scheinert(together known as “Daniels”), Everything Everywhere All at Once is a drama, comedy, action, fantasy, and sci-fi all-in-one.

Michelle Yeoh stars as Evelyn, an everyday, hard-working, immigrant mother with family problems. She is a stressed-out business owner, mother, wife, and daughter. Her laundromat business is being audited by the IRS, her husband (Ke Huy Quan) is planning to serve her divorce papers, she is still struggling to please her critical father (James Hong), and her daughter Joy (played by Stephanie Hsu) is upset with her because Evelyn won’t tell her old-fashioned father that Joy is a lesbian.

Now, take that and smash in the fact that an advanced group of Matrix-Esque hackers from an alternate universe have contacted Evelyn and need her help to stop a superpowered, murderous villain from destroying the infinite multi-verses! Evelyn, who feels unremarkable, must learn how to fight via verse-jumping (a person taping into skills from alternate realities) to save the universe while trying to keep her family from falling apart.

It may sound like too much crammed into one movie, but Daniels and team pull it off beautifully! What I love about this movie is how refreshingly original it is. I haven’t seen anything like it in years. The closest thing I can compare it to is if the Matrix was a comedy centered around a family drama.

So many movies recently have been doing the multiverse idea: Spider-man: Into the Spiderverse, Spider-man: No May Home, Doctor Strange: Multiverse of Madness, – well, I guess just Marvel, but this was the perfect opportunity for Daniels to jump in with their film Everything Everywhere All at Once.

The film’s thesis is that life can feel meaningless and pointless, but don’t let that make you depressed. You can do anything you want with your life, and there are an infinite number of awesome things to do. You could be mean to others, but that won’t make life any more enjoyable. But being kind makes life better for you and others. Be kind.

Everything Everywhere All at Once has also pulled in $5.6 million in Blu-ray and DVD sales[4].

Everything Everywhere All at Once performed so well that Daniel Kwan and Daniel Scheinert inked a 5-year deal with Universal[5]. I can’t wait to see what Daniels do next with bigger budgets!

Everything Everywhere All at Once is still playing in some theaters, so see it on the big screen if you can, or rent or buy it on digital or Blu-ray!

[1] “Everything Everywhere All At Once (2022),” The Numbers, https://www.the-numbers.com/movie/Everything-Everywhere-All-At-Once-(2022)#tab=summary.

[4] “Box office history for A24,” The Numbers, https://www.the-numbers.com/market/distributor/A24.