Movie Theaters Were Made For DUNE And Hans Zimmer 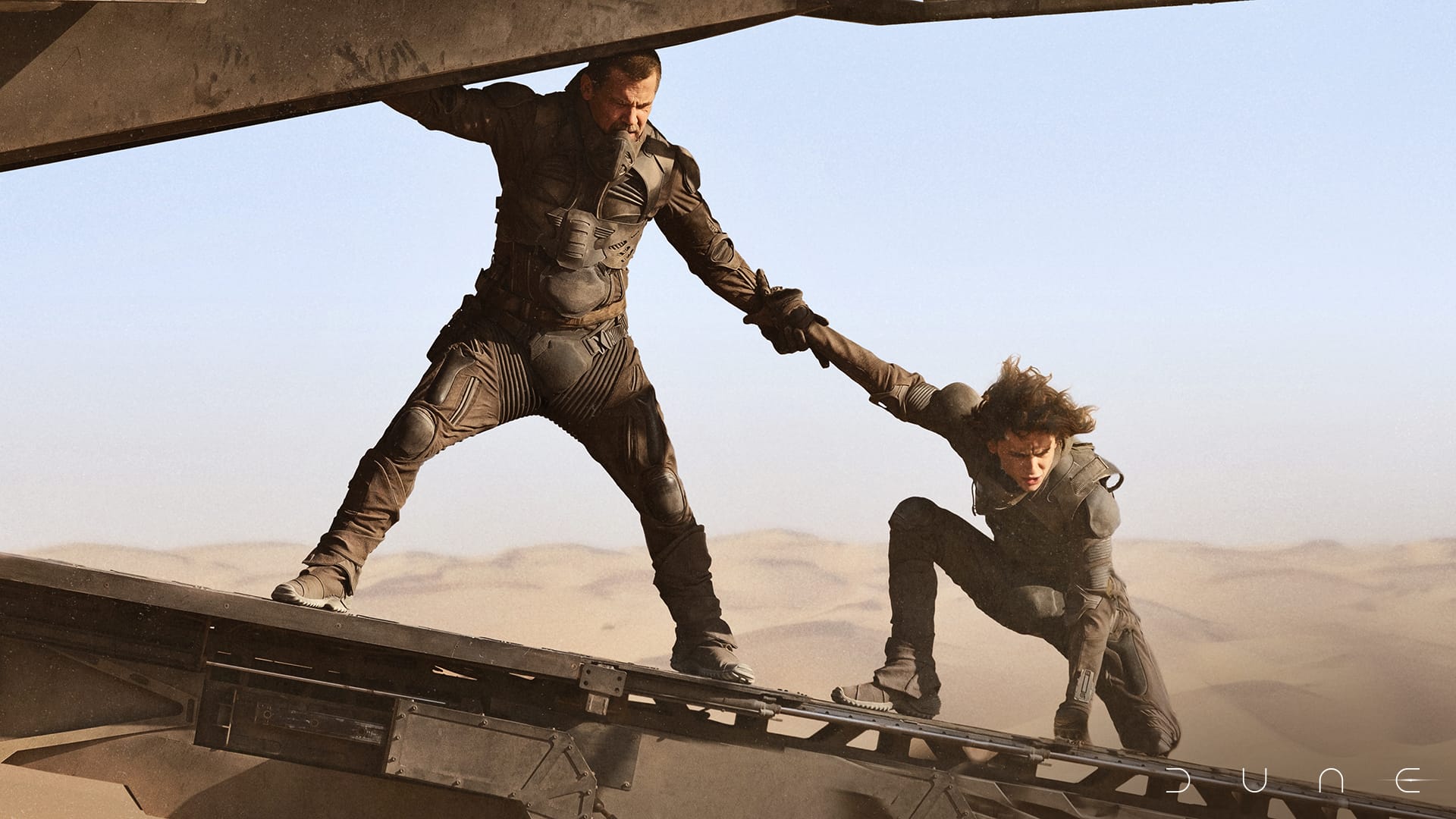 “Feature adaptation of Frank Herbert’s science fiction novel, about the son of a noble family entrusted with the protection of the most valuable asset and most vital element in the galaxy.”

I saw DUNE last night, I’ve already played the score all morning today. And I still have this deep epic all-knowing purpose brewing inside me. This one has stayed with me. DUNE is the movie I didn’t know I was waiting for. The epic that actually sweeps me away. Finally, a film big enough to make me forget I’m wearing a mask.

I know what you’re thinking about a world of this size that started as a book: But will I understand what’s going on? Yes and no. My brother, Director Marc Hampson, and I watched it together and agreed that everything we were introduced to made a visual impact – easily recognizable for the rest of the film. More recognizable than a Game Of Thrones House, but less verbal explanation. The film relies heavily on your aesthetic identification participation. But the mood, the powerful timber, and the moment-to-moment is clear as day. I have a feeling that a second viewing will only supply me with the words, names, and things that were instantly forgotten upon first viewing, but none of the plot would need a deeper reveal. I understood inherently, it was an easy read for the audience. More emotional and spiritually fulfilling than a who-is-shooting-at-who SciFi action adventure. This isn’t another kind of Star Wars, this was a more personal journey. The intimacy of the independent variety with the largess that pushed me back in my seat.

We’re obsessed with “The Chosen One” stories and this one hits them all: Centuries-old prophecy, 2 birth rights colliding, training from a young age in sorcery as well as fighting, and the coming-of-age story wrapped in a becoming-a-King tale. But I’m not tired of this. I’m excited to see this version play out, I have a taste of the anti-imperialism thread and I desire follow-through.

I agree that this is going to be bigger than just a new franchise that the kids wanna see, this is going to be the late pandemic hit that is solidified as a generation’s favorite adventure (see: “Dune review: Spectacular sci-fi adaptation is this generation’s Lord of the Rings trilogy“). What I cannot get over is the scope, the very nature of this piece feels more like space than the franchises that have come before. The sound design alongside the vastness of the water planet and the desert planet make me feel just as lost as I am in the open unsafe depth of space.

It was difficult to narrow down my choices, but I imagine I’ll feel like a completely different slate of characters rock my work in the next installment. Every single casting choice felt perfect. And, truly, every single character could launch their own series.

1. HOUSE ATREIDES: PAUL ATREIDES. BEYOND FEAR, HIS DESTINY AWAITS. The son of a great man and royal heir to the noble House Atreides, young Paul has spent his entire life being prepared for the greatness that comes with his family’s name. Haunted by visions of a mysterious girl and an inevitable future, he is called to leave his childhood homeworld behind for a new life on the most dangerous planet in the Known Universe, where he must confront his innermost fears if he is to realize his true destiny.

2. THE BENE GESSERIT: REVEREND MOTHER MOHIAM. MOTHER OF SECRETS. A wise Truthsayer who sees all-too clearly what humanity is capable of, Gaius Helen Mohiam of the mysterious Bene Gesserit Sisterhood directs her stern gaze of judgement towards the young Paul Atreides. Using prophecy and superstition to manipulate human history from the shadows, the Bene Gesserit play a long game across the generations, course-correcting humanity’s journey on the path to the light.

3. HOUSE ATREIDES: DUKE LETO ATREIDES. LEADER TO MANY, FATHER TO ONE. Duke Leto is a noble leader guided by duty to his people and love for his family. As head of House Atreides, he has built a reputation for mercy over malice, principle over power, and courage over fear. When called to bring peace to the endangered planet of Arrakis, he must prepare his only son Paul for the dangers that lie ahead.

Timothée Chalamet‘s “Paul Atreides“ is mesmerizing from his pointed chin to his slender fingers – and to his unusual boyish gait walking between warriors. He wears a suit like a fashion spred but his intensity is appropriately spent on an epic. Oscar Isaac‘s “Duke Leto Atreides” is the leader and Father we hope to see, with his authentic charisma honed for the tiniest of glimpses. Rebecca Ferguson‘s “Lady Jessica Atreides” has an other-worldly spark, a way of seeing directly through the surface, she is always working on what’s really happening for us to learn later. Charlotte Rampling‘s “Reverend Mother Mohiam” is the witch of my nightmares. I love her Maggie Smith spitfire quips balanced with her horrifying Cersei-on-a-bad-day spirit.

The black veil of sorcery is highlighted early in the movie, my body is chilled to the bone with “The Voice” and all its power has to offer. I feel powerful having felt it. The religious back-door decisions that move and create political progress for whomever the religious elite deem important to their cause, may very well push Timothée Chalamet‘s “Paul Atreides” to take up his destiny and dismantle the present reality of space travel. I still cannot tell if his journey is that of a pawn, stepping into his false thrown, or if his genuine connection to the Fremen people free him from the path carved out for him. His frequent visions served up plenty to chew on until Part 2.

Yes, this is only Part 1. It’s risky to invite us to come play with only half of the picture, but it didn’t feel like we were unable to complete this film’s journey.

And the music. I am unable to put into words the way I felt inside this score. But I felt small, yet empowered. I had a full body massage in the Warner Brothers theater, rumbling that stuck with me all the way to the parking lot. I still feel it as I write.

And still, there is more, “Hans Zimmer Composed a Second Original Score for ‘Dune’”:

Don’t miss out on the premiere entertainment event of the late pandemic. I’ll see you at the theater, I must watch it another time before it leaves. You’ll understand why.