New Release: BACK TO LYLA’s Heartwarming Unique Journey Turns Inside Out 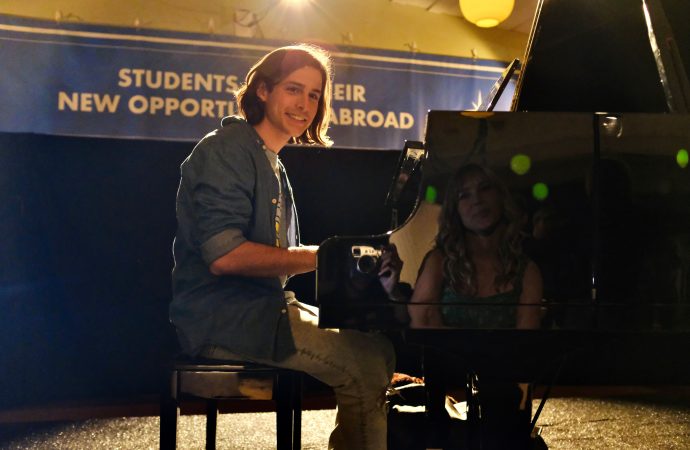 Mark is heartbroken because the love of his life left, but Mark is suddenly on a new path. As we watch, we become increasingly aware that something is amiss. Something big is happening in Mark’s life. And we’re not sure he’ll survive it.

“Mark Goldman has officially hit rock bottom. When we meet this directionless young man, he’s stuck in a bleak routine, doing anything in his power to move on from his break-up to the only person that truly understands him. The one that got away. His high school sweetheart, Lyla Miller. Now, it’s fair to say this isn’t the real Mark. Mark is a shy, charming underdog, with a distinct gift for music, and after several months of slowly losing his identity to a dark “moving on process,” he is now receiving the only news that could actually wake him up from this grim reality: He is dying. From a pretty surreal disease, one must say. Life works in mysterious ways, and now that destiny’s asking what he wants to do with the rest of his life, Mark finally seems to have an answer: He needs to say goodbye to Lyla. The thing is, he doesn’t know where she is. The only people that might know are the estranged and over-the-top group of childhood friends he alienated during his break-up.” – Watch Now HERE

Written by Guillermo Noriega and directed by America Young this film is perfect for teens all the way through multi-generational viewing. An audience-pleaser and an unexpected deep-dive into coming-of-age romance.

From the very beginning, the audience is offered breadcrumbs to a new way of seeing Mark’s experience and hints about what is really happening under the surface. But we don’t get lost in the confusion, we are hypnotized by the peculiar characters’ energetic humor and imaginative sequences. Then the cognitive dissonance pours in with no deep reliance on cellphones, no modern amenities that could cut through the plot, and no present reality – everything seems to take place outside of our real sad politically fractured world. We soak in an intangible surreal time and a place. And we feel safe there.

Tracie Thoms as “Dr. Nolan” takes us on this journey, our unsung narrator-of-sorts who tells us all we need to know. The Magical Goddess gives us direction, but not enough to truly understand what we are undertaking. Tracie Thoms is a career powerhouse, with memorable roles in Rent , Cold Case, and 9-1-1. She is perfectly cast and takes great care of us all the way through to the other side.

Chris Lee as “Preston” is charming, commanding, and relatable. He shines in every scene. Confident and put-together. He wears his signature purple with pride. Alex Felix‘s “Kaitlyn,” our empathetic peace-maker spreads her optimism like a ray of yellow sunshine. Charlie Morgan Patton‘s “Ira” is realistic about the challenges of this road-trip. She is little negative at times, balanced with a quirky fighting passion. She often jumps back and forth between her embrace and turning RED. Esteban de la Isla as “Robin” is a caricature of the unpredictable theater kid outcast, but honestly he pulls it off. He’s sweet. He is the compliment to every other person in the room, orange chaotic neutral in the best way to describe him. He serves as our spirit-guide from the first part of the film in shadow to Mark waking up to himself, ready to combat his antagonist and let his hair down again.

Emma Kenney‘s “Rebecca” comes on strong, flashing a big bad-girl front, but then slowly peels back the ‘cool’ to show her self-serving and self-destructive antagonism, begging for attention.

Gonzalo Martin as “Mark” is a youthful, artistic heartthrob turning into a leading man. He is gentle, open-hearted, and yet he breaks down when passion feeds him his lines. We trust him from the very beginning, learning that being on the journey with him is more important than grasping what’s happening around him. A BAFTA Winning actor from Argentina, I hope to see more of Gonzalo Martin.

Oh, Lyla, Lyla, Lyla. I fell in love with actress Hassie Harrison in Tacoma FD and then jumped for joy to see her tackle Yellowstone. I cannot get enough Hassie Harrison. A great casting choice in that she is not a manic pixie dream-girl, but for long stretches of time she could in-fact not even exist. The thought crossed my mind for much of the film. She is ethereally placed in just Mark’s mind, until she becomes real in an understated, quiet, and patient moment where we discover the entire future of their relationship in her loving eyes. In just a few key seconds on screen, we see her find him playing piano alone at -what must be- the end of her long private personal journey as well, discovering that the ‘Lyla’ shown to us before was just a larger-than-life caricature like the rest of the bunch.

Director America Young shows off her well-paced action experience. And her love for youthful misfit friendships that are timeless. Reminiscent of her first release, THE CONCESSIONAIRES MUST DIE!, a young adult with a fabulous imagination (and similar vibe to our Mark) taking on a mission with a wild assortment of well-meaning misfits.

Watch THE CONCESSIONAIRES MUST DIE! Here

BACK TO LYLA is filled with deeper symbolism, colorful friendships, and hints of THE WIZARD OF OZ and INSIDE OUT. Young takes her time to develop and cherish each character knowing this story requires a lot of trust. Young is beloved for her imaginative storytelling as well as her important behind-the-scenes advocacy.

“Everyone talks about more diversity and representation in Hollywood, especially with women at the forefront, but it’s rare to see it achieved on such a large scale, as we accomplished with “Back to Lyla’”

In regard’s to an important moment at the hotel between Mark and Robin: Mark’s break-up story is not ‘a convenient loss of memory’ for the plot to make sense. Sometimes ‘we’ cannot see or remember things that are important to us. Sometimes we need time, space, and a friend to help process what ‘we’ did. Sometimes we end up watching our own mistakes as if it’s on a TV screen, once we have the right lens, we can actually see what really happened. Mark couldn’t see some parts of his memory. Mark acts radically. Mark is a character in a heightened emotional story in a deeply reflective man-v-himself narrative. Mark is pale and neutral blue. Until he isn’t. His striped shirts and pale blue turns bright when he feels alive again. His climatic breakthrough parallel’s his shirt hue and literally power’s up supernaturally in color before our eyes. He becomes full and bright again.

Watch this movie today. It’s accessible on multiple platforms and it’s a good watch any time of day. An all around enchanting ensemble and a special shout out to Dove Meir as Nurse Elliot (since it wouldn’t be an American Young film without a Dove cameo). BACK TO LYLA is a carefully loving romantic comedy, friendship adventure, pro-therapy and self-reflection story, with a satisfying ending.