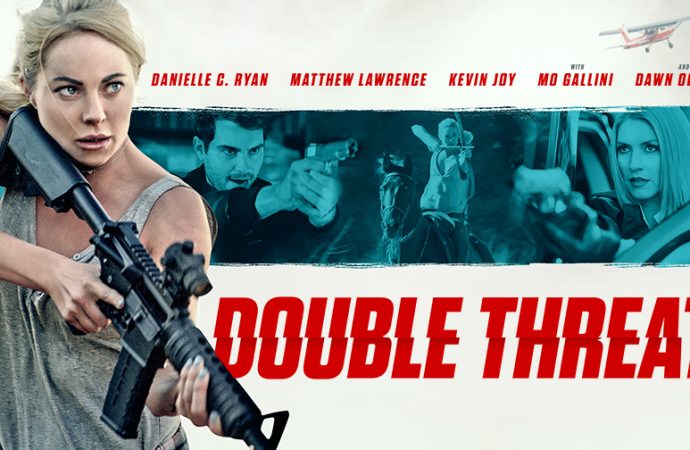 Get your action fix here:

I had the chance to ask Director Shane Stanley about DOUBLE THREAT:

Tell me about your new movie!

We had been on lockdown from the pandemic for about 6 months. I called my producing partner and said, “2020 can kick our ass or we can make it our bitch. Let’s go make a movie!” CJ Walley had a script done in 6 days and we put it together. From concept-to-wrap of principal photography, it was about two and a half months. [My] collaborators were CJ Walley, Danielle C. Ryan, Joel Layogan, Neil Chisholm, Dawn Olivieri, Kevin Joy, and the wonderful Matthew Lawrence. Great people involved and super proud of what we achieved with such little resources. Everyone involved wore so many hats and did so much outside of their comfort zone.

Love your main cast, how involved were they in creating these characters? (Was it written for them, did you have a previous professional relationship?)

CJ Walley and I were in talks to work with Danielle C. Ryan before the pandemic, but when the lockdown happened, everything came to a halt. When we decided to do the film, we reached out and she was totally down to come out and play. Dawn Olivieri, I had been a fan of since seeing her in House of Lies and knew her agent who said she too was climbing the walls and wanting to get out and be on a set. Matthew and Kevin were the same, so it was more about knowing who we were going to work with and cater it to them. Dawn’s role was originally written for a man, but once she signed on, we tweaked it for her and she’s so damn good at making whatever she does ‘her own’ it just all fell into place.

…I was reminded that there is still a lot of good in this world. Everyone came together to be a part of something because they missed being around people, so our all working together meant so much more than on any other project.

Who was your stunt coordinator, what was that process like for your team?

Doc Duhame was our stunt coordinator. I’ve known Doc since 1982 when I was only 10 or 11. I don’t think there’s a better fight coordinator in the business and when you see the fights Danielle C. Ryan does, I think you might agree. No stunt doubles, Danielle did all of her own stunts from fighting, driving, and horseback. She’s the real deal and gives filmmakers so much to work with because she’s a hell of an actor too.

What is your favorite scene in the film? I think the big fight scene is my favorite because I know what went into it but I love the scene where Danielle’s character fixes the truck. Watching Matthew Lawrence blush is worth the price of admission.

What are you working on next?

We just wrapped “Night Train” which is a project I am very excited for the world to see. A single mom struggling to make ends meet as a Hollywood teamster evades capture by a ruthless FBI Agent while running black market medical supplies in her legendary souped-up pickup truck.

Shane Stanley is a multi-Emmy® Award-winning filmmaker and author who grew up in/around “the biz” in Hollywood. As a childhood actor he had appeared on-screen in over 100 projects, including with Hollywood legends June Lockhart, Lloyd Haynes, and David Arkin. By age ten, he was comfortably running an Arri 16mm camera, a flatbed-editor, and Moviola.

Along with his father, Lee Stanley, Shane produced The Desperate Passage Series. The docu-drama series ran on KTLA with world-wide syndication from 1988 to 1994, was nominated for 33 individual Emmy® Awards and won 13 statues. Two episodes of the series went on to become successful feature films, Gridiron Gang was acquired by Sony Pictures and became the #1 box office hit starring Dwayne ‘The Rock’ Johnson.

In 2004, Shane made his directorial debut with his own screenplay, A Sight For Sore Eyes. The film was honored with the Special Jury Award at WorldFest Houston, won two Telly Awards for Outstanding Achievement in Film & Television, as well as winning top honors at the International Family Film Festival along with Walden Media’s The Chronicles of Narnia. It went on to win dozens of prestigious awards and was invited to screen at Cannes in 2005.

Shane has also directed countless music videos, many which have aired on VH1’s Top 20 Video Countdown, including two that went #1 and another that made the network’s list of Best 100 Music Videos including “Go That Far” with Bret Michaels. The Michaels’ video was used for the television series Rock of Love, where Shane also served as a consulting producer.

Other credits to his name include The Untold Story and Mistrust, starring two-time Golden Globe® and Emmy® Award winner Jane Seymour, that premiered on Showtime.

His book, “What You Don’t Learn in Film School” covers filmmaking from concept to delivery. It has landed on required reading lists at several universities across the country and is endorsed by some of the most respected names in Hollywood including Neal H. Moritz, Producer (Fast & Furious, S.W.A.T., 21 and 22 Jump Street) and Paul Williams, Oscar®, Golden Globe® and Grammy® Award Winner and Hall of Fame songwriter.

In addition to his Emmy® Awards, Stanley has received 11 Telly Awards, 2 CINE Golden Eagles Awards, 5 Aurora Awards, 4 WorldFest Remi Awards, and 28 International Film Festival Awards. He has spoken at several prestigious film and art institutes around the country including The Screen Writers Expo, the world’s largest tradeshow for screenwriters, alongside Oliver Stone, Michael Goldenberg (Harry Potter franchise) and Adam Herz (American Pie) about the secrets of marketing to today’s youth.

He is on several advisory boards for film schools and art programs across the country and is a contributing columnist for Student Filmmakers Magazine and NoFilmSchool.com as well as an instructor on Stage32.com, FilmCourage.com and IndieFilmHustle.com. In April 2021 he testified before the US Library of Congress on behalf of prestigious universities to help amend a 1978 copyright law that made traditional learning difficult for film school students during the COVID/virtual learning era.

He and his wife, actress Val Barri, are active in charities supporting cancer research, restoring hope for inner-city youth, and animal rescue. They live in Los Angeles.