New Release: Hilarious Comedy Special “Front To Back” Encourages Us To Never Give Up Childish Fantasies 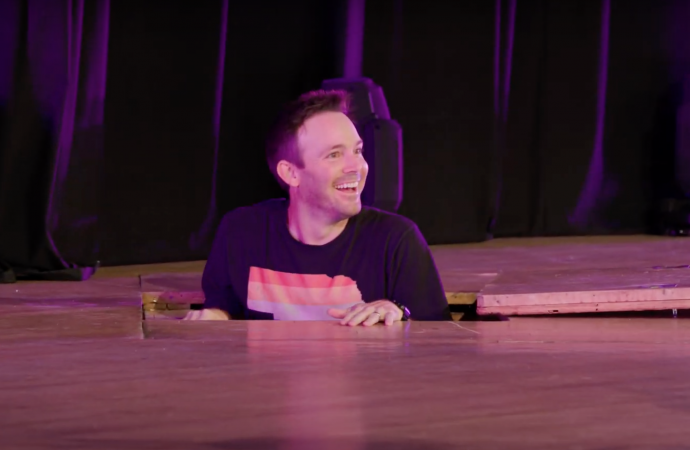 "Front To Back" Stand-Up Comedy Special

In Nick Hoff’s debut Stand-Up Comedy special, he jokes about bad parenting, the dangers of relationships, and every man’s wildest fantasies.

Parents will IMMEDIATELY know what the title refers to – this comedy special title implies the comedian has parented a baby girl. If you’re already familiar with Nick Hoff’s comedy, you’d know he has a fair amount of parental and domestic humor. These are my favorite all-time jokes from his repertoire. I’ve been a fan of Nick Hoff’s comedy since 2009! Been following his career for 13 years now, seeing him all over Los Angeles (Santa Monica hosting residency to his ‘try out’ shows in East Hollywood and everywhere in between). You can see his well-crafted and audience-tested work on display here. He may be new to you, but his special is expertly delivered while he jokingly seems to be no expert in anything else.

This special is safe for most ages, but not appropriately attuned to people too young for relational marital humor and bad parenting jokes. His humor is mature enough to turn down the volume around my younger kids but safe enough for any comedy club across the country. Watch with your spouse, teens, older parents, including people on opposing sides of the political and religious spectrum – he’s All-American and the perfect comedian to pull up on the family TV after dinner or send to a coworker on the weekend.

“Nick Hoff is a nationally touring stand-up comedian whose album “Baby Daddy” hit #1 on the iTunes comedy charts. He has been on MTV, SiriusXM, and can often be seen in commercials for Miller Lite, Pepsi and Amazon where Nick has been cast by top directors in the business including Peter Farrelly, Craig Gillespie, James Mangold and Philip Seymour Hoffman. He has been a comedy writer for Life & Style magazine, as well as a featured act in Netflix’s Wild West Comedy Festival.

Nick was hand-picked by Jeff Foxworthy and Larry the Cable Guy to open for them on their critically acclaimed “We’ve Been Thinking” Tour.  He has headlined the “Pink Ribbon Comedy Tour” which made stops in 40 cities doing 65 shows all raising money for breast cancer research.  He was also part of the “Walk of Shame” national comedy tour, which was not quite so noble a cause.“

In this special, Comedian Nick Hoff showcases his best blue-collar modern family-man personality. He cares big about his family, his relationships, and preserving his childish dreams – but throughout the special he continually exposes his real love of all the different people he encounters in this country. He is incredibly relatable, isn’t afraid to poke fun at our differences, but a good sport about bringing us all back together through laughter. He caters his comedy to his Hastings, Nebraska audience (donning his Nebraska shirt as a reminder) while he unabashedly shares his current Los Angeles, California family-life experiences. He has been touring the country at a time that many people could not or didn’t dare. And his insight is invaluable!

The benefits to this kind of FREE straight-to-the-fans, worldwide YouTube special release is scalability and control. Comedian Nick Hoff owns the video (most comedians don’t!) and can post anything from the shoot as he wishes (check him out online to see GREAT clips on Facebook, Instagram, Twitter, YouTube…). It has the potential to get out to more people than any other platform.

This special has been in the works since 2019, scheduled to shoot in May 2020, but in Nick Hoff’s words, “then something happened, but I can’t remember what.” But this scalability requires action from people, “People that want to laugh and enjoy life so they decide to click on the free special.  It’s a harder and harder thing to do in an increasingly passive society and how they consume entertainment.“

This type of special is perfect for me to send to friends and family, because I know they will click on FREE new comedy anytime. It’s easy to watch on the TV OR portably on my phone (if I was a younger viewer who preferred my phone screen). Now that I see how the pandemic hit comedians (who ultimately just want to bring people JOY), I am happy to share this special with a few friends right away. It costs me nothing to share AND, more importantly, it costs them nothing to watch!

“I’m working on a new hour and just want to grow my audience.  I’m still a new discovery for a lot of people so when they see the special, then they’re encouraged to come out and see what’s new, and see it live!  Or visa-versa, when people see me live and want to find more of my comedy, they can find this special, along with my first album and any tv/podcast appearances I’ve done.”

Check out a few reviews I found from people already:

And check out the tour dates! More info on the tour HERE: