Nostalgia Is A Hell-Of-A Drug, So Cut It With This Retrospective Podcast 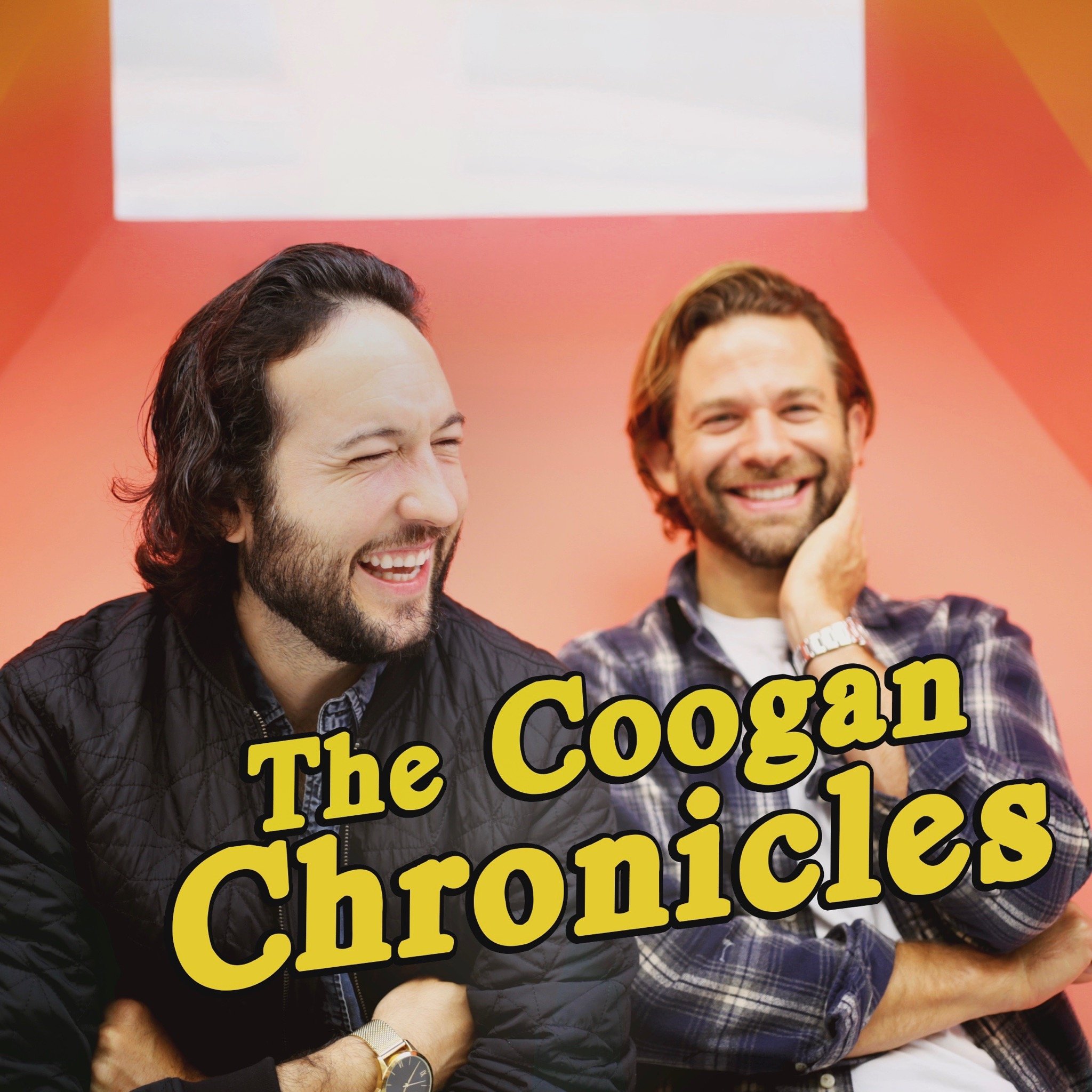 Catch up on The Coogan Chronicles Podcast NOW: Exploring the lives of your favorite stars about their time in the spotlight and what it’s like looking back. Hitting that perfect balance of awareness, digging up the buried past, and telling their best side-splitting stories.

AJ Trauth: “Are you a public figure forever? …Acting at 10 years old and you acted for a few years and now you’re in your 40’s, does that mean you’re a public figure 30 years later?”

Former child actors Chris Marquette (The Girl Next Door, Just Friends) and AJ Trauth (Even Stevens) take us on a wild ride reliving their youth. But it’s not all puppies and rainbows and A-lister parties. The path can be very dark. They reveal wonderfully nostalgic insider tales, but they have also earned a perspective that demands the forum of a podcast. The co-hosts have comfortable chemistry, a long history, and don’t shy away from vulnerability. But these aren’t public figures, these aren’t tastemaker influencers and activists, these are honest working actors with a personal story to share. And I would argue that we should all listen carefully. And it’s because AJ and Chris flipped the script: Real former child actors are talking to real former child actors and the usual predatory sensationalization isn’t there. In Madeline Zima‘s (The Nanny, Californication) first episode, Chris Marquette opens up the episode by sharing that in that very interview, he learned how easy it could be to push too hard for dirt and at that moment he had recognized his interest in gossip and addressed it head on. It’s a priviledged peek behind the curtain that we, as the public, don’t deserve to see. And I’m so happy to be invited to listen.

And AJ and Chris have a strong point of view on the exploitation of child actors, they don’t use this podcast as a platform for exposing exploitation and sussing out hidden secrets, they explicitly state that they don’t judge or have issues with child actors in general. But they don’t pull any punches about the failure of the media to respect the boundaries that children should be afforded. In their episode interviewing Steven Anthony Lawrence (Even Stevens, Cheaper by the Dozen), Chris points out that vulnerable child actors are put on a pedestal… audiences form an emotional connection to a child actor that feels authentic, like you know them, because you watched them grow up. To see them in a completely different light and a horrible circumstance is too tantalizing for media outlets to ignore. I’d like to think that the film industry has progressed from that, but 2020 articles are STILL filled with Child actor clickbait, Child actors ‘where are they now,” and nostalgia straight to the veins. Efforts to consider the well-being of the child actor in the vast entertainment industry (like the Coogan Account, of which the podcast was named) are progressing, yet we still have a long way to go for child actors to be protected and prioritized.

BUT BUT BUT, this podcast series is a lot of fun, too. So much fun! Guests are educating, dissecting, unpacking in a way that is still considered easy listening. Steven Anthony Lawrence shares wild stories about throwing up on Tom Cruise, holding Will Farrell’s baby, eating lunch in the Psycho house, and being “18 to play 10” while beginning to lose his hair. And Chris joins in the fun to share about begging to do his own stunt and crashing into a $600,000 camera on set. If you want to have a wealth of wild trivia, this would be an enjoyable podcast to digest for weird entertainment history that is probably interesting in any circle. Yet, it’s straight from the source, so I don’t feel yucky enjoying it!

AJ Trauth: “We hope listeners will be entertained by the stories of former child actors as well as getting a better understanding of what the life of a child actor is really like and how working at a young age impacts your adulthood.”

One of my favorite aspects of this podcast series is that AJ and Chris ask each guest about how they spent their Coogan Account. A Coogan Account insures that child actors and athletes receive a portion of their earnings, 15% of the minor’s gross wages are accessible to the performer when they turn 18 (read about the history behind Jackie Coogan). It’s fun to hear how these actors were incredibly responsible and hard working and likely much too young to make all the best choices with their earnings when the time came.

AJ Trauth: “I think episode 1 where Chris and I interview each other is the perfect introduction to the series. It lays the groundwork for what you can expect moving forward as well as giving you some backstory on us as your hosts.”

Chris Marquette: “We enjoyed every episode. But give a listen to Stephen Anthony Lawrence’s episode. He’s a former kid actor that’s continued to get press in his life as an adult from his work as a kid, and the media hasn’t always been kind. He tells his side of what his life looks like when internet stories about him have gone viral and I think that if you’ve ever clicked on one of those click bait headline ‘where are they now’ links, you’re gonna feel like a butthead after you hear what he has to say. We have an episode coming out soon with Mara Wilson that’s truly incredible. Shes written an amazing book on her time as a kid actor and we explored that venture alongside her time as being one of the most recognized child actors around the globe.”

Although Chris Marquette is from Florida, Texas, Georgia, New Jersey, … he is unquestionably Californian. His cadence, vocal quality, excitement for the material, yet incredibly casual demeanor makes his interview style easy to absorb. I could listen to him interview a colleague for hours. Oh wait, I have. And Chicago native AJ Trauth gives this rounded adult perspective that pairs so well. Hearing about AJ’s life change in his early 20’s gives a generous look into why there are so many issues with child actors transitioning into adulthood. I particularly enjoyed his candid exploration resulting in his transition into producing and development, knowing his journey didn’t stop in the industry may be very hopeful for others who may still be looking for their next steps.

Chris Marquette: “I’ve been acting since I was 4 years old. I met my good friend, AJ Trauth, who also acted as a kid, when we were teenagers and decided to start this podcast together. AJ and I felt that the stories we have to share from our time professionally acting as kids, would live and die with us. So we wanted to share them alongside the countless others who had grown up acting professionally. There are so many untold funny, tragic and everything in between stories that we’re excited to share with people. We also wanted to go back and celebrate some of the work that so many of these former kid actors kinda forget about it, or even sometimes distance themselves from.”

Since this podcast premiered during the pandemic, I asked AJ and Chris about how their 2020 had gone for them since they embarked on this adventure (which I suspect was just a ploy to spend time with a good friend and laugh about their years together).

Chris Marquette: “I’m a new dad. And that’s been exciting to grow in to. And its been great to learn the art of the interview.”

AJ Trauth: “Launching The Coogan Chronicles was a huge accomplishment. So proud of the work we’ve done so far. As much as he drives me crazy, I’m thrilled to be working with Chris. And grateful to all our friends who have been gracious enough to sit down with us to share their experiences growing up in show business.”

Exploring the lives of your favorite stars about their time in the spotlight and what it’s like looking back.

Hosted by former child actors Chris Marquette and AJ Trauth, who met on a set as kids and have been best buds ever since. (1 hour)