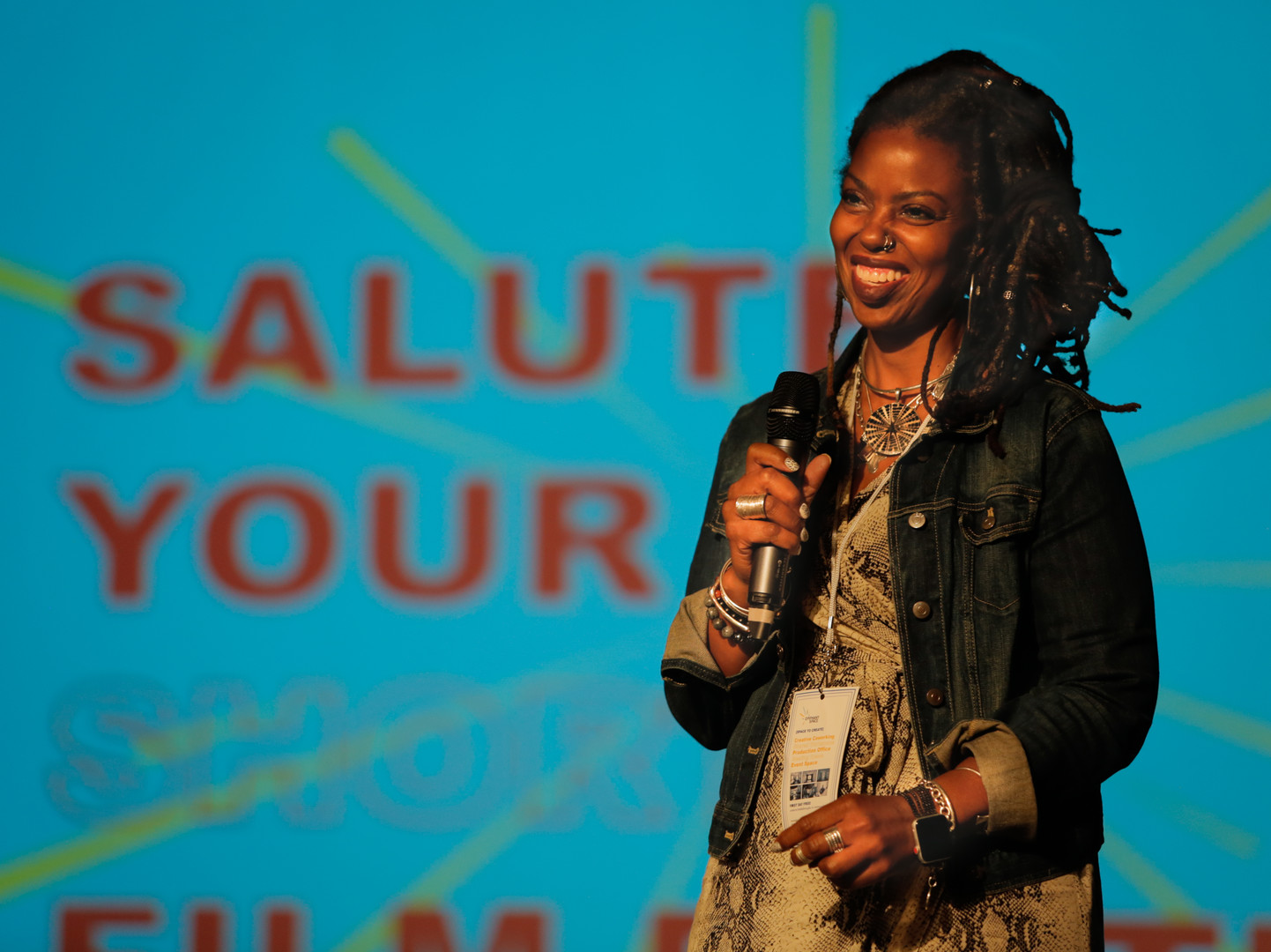 An Interview with Artistic Director and Co-Founder Erin Brown Thomas.

This year, I arrived extra early to the opening night of Salute Your Shorts Film Festival because I have fallen in love with their team and the urge to come early and help with set up seemed only natural. What a grounded, kind, genuine, film loving community they foster. Their dedication and personal touch is what sets them apart. I have travelled the country for over a decade on the film festival circuit and have only a few favorite fests that I’ll always try to attend with or without my own work in competition. This is one of those fests because their one-of-a-kind team. Here is a brief interview with Erin Brown Thomas:

Why did you start your fest?

I spent a lot of time traveling to film festivals with my first few shorts.  My best experiences were always outside of LA.  I would go to Cleveland, Ohio; Crested Butte, Colorado; Bend, Oregon; Wilmington, North Carolina; or Indianapolis, Indiana and experience what I’ll call “film camp” -something akin to the community spirit I’d felt as a child at summer camp, but here everyone was an adult filmmaker.

I would go back to LA between film festivals and long for the next trip where I got to see my “camp friends” again.  The irony is that many of them live across town from me, but I would rarely see them until we flew on a plane to another city.

My films got into a handful of the prestigious events here in LA — ones with great hospitality teams who offer all kinds of incentives to filmmakers like parties and panels. And yet, for some reason that feeling of “film camp” never accompanied those experiences.  I asked myself “why?”

Living in LA, it’s hard to take time off to fully invest in a festival experience unless you travel.  An entire week of events doesn’t feel like an escape without mountain views or beach vibes — in fact, it feels like work.

Still, there are great reasons to want to screen your film in LA.  The obvious being — most of the film industry is based here.  Your cast, crew, and contacts can all see your film on the silver screen. It’s the pay-off after months (or years) of hard work.  Beyond that, filmmakers want industry attention.  A lot of my favorite “summer camp”  festival experiences occur in places where the film industry isn’t motivated to travel to.

So I asked myself – which festivals have I traveled to even when my films were not included in the year’s lineup?  Sundance, SXSW, Tribeca. Why do I go to these events?  Because I know I will be creatively challenged and invigorated by the films AND because I know I’ll be rubbing elbows with visionaries, gatekeepers, financiers, and my friends who I never get to see because they live on the other side of the 405.

So these were the two things I realized.  LA needed a manageable “summer camp” weekend for filmmakers — and they needed their inclusion in this intimate “summer camp lineup” to be impressive enough that their friends who live 10 miles away are not only willing to travel the (sometimes two hours) time it takes to cross the city, they are excited to.   These are our founding values – community and excellence.  It sounds simple. It sounds obvious. But I’m telling you, it takes a lot of integrity and checks-and-balances for our team to keep these two values at the forefront of every decision.

Becky Murdoch and I co-founded the festival in 2017 and our team has slowly grown ever since, keeping this mission in mind.  I’m of course biased, but I do believe our reputation is growing in the direction we intend.

What was your favorite moment from this year’s fest?

Are you really going to make me choose just one?  I have so many!  It was very special to host Nathan Nzanga, the writer, musician, and subject of the film “enough” during our opening night party.  He sang the songs featured within the film which I believe made the film all the more powerful for our audience members who were then somewhat acquainted with the lyrics.

I’ve really loved the outpouring of love from filmmakers since the festival ended. I’ve received countless DMs, and I’ve also witnessed some of our filmmakers meeting up and collaborating after being programmed together.  That really makes me smile.

What did you and your team do that you felt kept filmmakers coming back even through a pandemic? Do you plan on keeping any of these flexible adjustments even after the pandemic is over?

There are two new practices that we implemented in 2020 and 2021 which we will absolutely continue.   First – programmer statements.   In 2019 I was traveling as a producer with a feature film and got to experience firsthand how wonderful it feels to read a gushingly positive programmer statement.   I thought – why do only feature films get this kind of attention at festivals?  The reason is likely that programmer statements are a lot of work.  Kath Tolentino, one of our programmers, has told me that she spends up to an hour on each one she writes.  One of the advantages of keeping our lineup small and intimate is that we can dedicate this kind of time and attention to individual short films. We will continue this practice moving forward.

Secondly, we loved hosting our GrubHub virtual filmmaker brunch during the pandemic.  It allowed us to get to know filmmakers from Chicago, NYC, even Greece.  It encouraged our LA filmmakers to show up and see their films. It also gave our programmers (who do not all live in LA) the chance to bond with filmmakers whose work they championed.  There’s no reason we can’t continue this practice.

What do you wish filmmakers knew about running a film festival?

My programming team and I truly agonize over letting many films go. About 30% of the films we receive are of programmable quality. We narrow that down to roughly 5%.  A lot of solid films (many of which are crafted by friends and alumni) don’t make it into the final lineup.   I want people to know that a “no” from us doesn’t necessarily mean that we don’t love the film. Conversely, a “yes” from us definitely means that we love the film.   I’m grateful that our head programmer Lauren Reid Brown calls filmmakers to let them know their film has been accepted into the festival.  She is able to communicate to them how delighted we are to screen their film in a way that a simple email cannot convey.

I couldn’t agree more.  Our festival is run by filmmakers, so we’ll always have that perspective in mind.

“Forbidden to See Us Scream in Tehran” is a true Underground Film about an Underground band, and its rightful Directors and owners are the brave cast and crew in Iran who put themselves at risk during the seven days of the shoot to share their story with the world. His Q&A at our festival had audiences sitting at the edge of their seats.  I’m grateful for him and the stories he is choosing to tell.

Akanksha has become an instagram buddy of mine. It’s weird how I feel like I’ve known her forever although we still have yet to meet in person.  Her sense of humor is cutting and of-this-moment.  I have high hopes for her film, which took silver at the Student Oscars, to capture an Academy Award Nomination.  Fingers Crossed friend!

Afton was delightful to have at the festival. She was one of several filmmakers whose films screened at the beginning of the weekend, but then stayed to watch the films throughout the rest of the festival. I’m telling you – this is rare for an LA event.  We are thankful.  When I say we are all about community building at our fest – here’s a perfect example — We lost our photographer for our last block and so Afton offered to step in and host Q&A so that I could take photos of the Q&A (I was originally going to be doing the Q&A). She had such thoughtful questions for the filmmakers.

On top of being an incredible filmmaker whose feature was just accepted into Gotham week Julian has been a constant advocate for IATSE members who have been pushing for safer working conditions.  Every time I get online I see him using his voice to help others.

Anna won our 2018 festival alongside her director Laura Holliday with the short film Disfluency. She recently went on to write and direct the feature version which took top prize at Austin Film Festival.