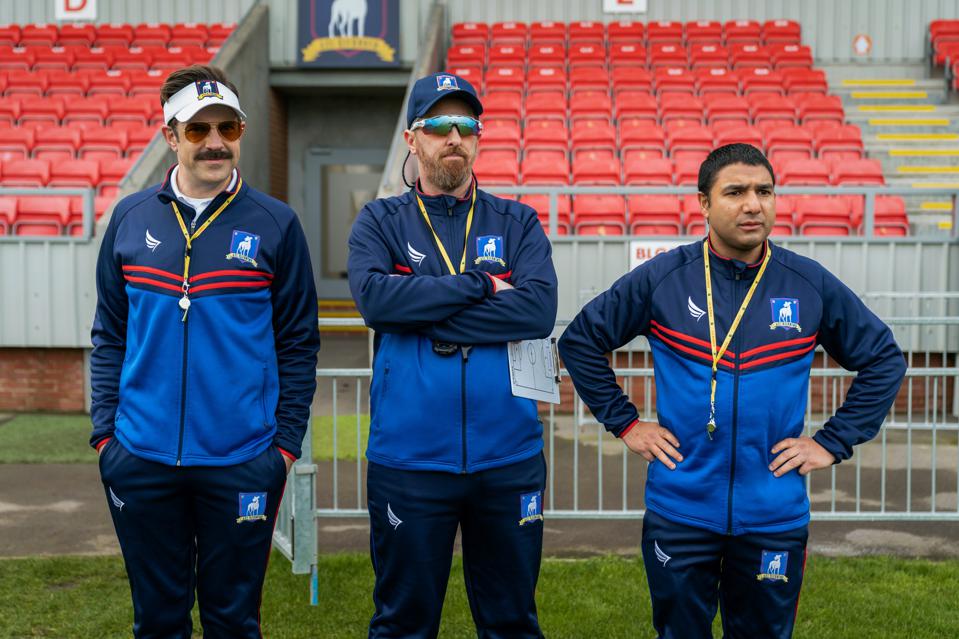 I’ve come to enjoy almost every character in Ted Lasso, almost. But I think the key to enjoying Season 2 (spoilers ahead) is not in hoping you’ll have warm and fuzzies every episode, because you won’t, it’s because you care about each character’s purposeful growth and kindness in the face of a very cruel world. Growth is showcased in personal deconstruction (or eventual reconstruction) and the barometer for successful growth being ready to give or receive forgiveness.

Variety‘s Caroline Framke puts season 2 together perfectly in “In Defense of ‘Ted Lasso’ Season 2, a Risky Sequel That’s the Good Kind of Messy,” “Rebecca asks herself what she truly wants in love and life for the first time in decades. The team’s former captain Roy (Brett Goldstein) tries to find his place in both retirement and a stable relationship with publicity manager Keeley (Juno Temple), who in turn is settling into a more adult version of her previous life. Sweet Sam (an ever-confident Toheeb Jimoh) learns how to stand up for what he believes in, while superstar footballer Jamie (Phil Dunster) finds himself humbled in the face of potential obscurity and his deadbeat dad. Even Ted’s assistant coaches are struggling, with Beard (Brendan Hunt) caught in a self-loathing loop and Nate (Nick Mohammad) at a toxic crossroads of insecurity and performative masculinity that seems on a clear collision course to disaster.

But it’s Ted’s inability to outrun his past, let alone smooth over his present with a meticulous smile, that deepens the bruise of Season 2. By the time he finally acquiesces to having a real therapy session with Dr. Sharon (Sarah Niles) in episode 10 (“No Weddings and a Funeral”), he’s a raw and exposed nerve shuddering at every flicker of contact. Their ensuing conversation, acted with precise skill by both Sudeikis and Niles, is the natural sequel to Ted’s Season 1 panic attack outside the karaoke bar, representing both an escalation and a cathartic sigh of relief.”

More like a PSA than a show filled with comedians, each character has a thoughtful and advice-seeking decision to make throughout the Season. It’s unusual to see characters on a major comedy all attempt (successfully) to be better communicators, better friends, better colleagues, and better carers for themselves. I suspect the people who love the show the most right now are people equally seeking ways to be better communicators, better friends, better colleagues, and better carers for themselves. In a virtual world, I feel so disconnected, pained by miscommunication – and lost friendships because misconceptions run amuck. I see my peers on TikTok finding self-diagnosis to be fruitful, seeking ways to understand, cope, and find tools to make their lives and relationships better. I see generations that went before me reaching out to finally connect about how their personal deconstruction looked different than the present social connective platform deconstruction renaissance looks like for my peers and younger generations. We’re having conversations with shared language and a generous attempt at non-ironic use of new terminology. There is a sense of general “try to be better” going around. And all of those generations meet at the TV for Ted Lasso, whether or not they’re using their own Apple TV+ password.

And people trying to be better and seeing characters on TV aiming to better might be inherently more willing to overlook some rough patches? Consider Beard’s episode, Rebecca and Sam’s age difference, Rebecca and Sam’s work connection, Sam rejecting an amazing work opportunity (but I know it’s a part of his development to stay on the show and have a more rewarding 3rd Season arc!), Keeley and Roy’s flirt with …flirting with others, Ted’s insistence in non-authentic relationship with Dr Sharon, the disjointed timeline of the ending, Christmas just-because, the 2nd Season stand-alone cliche themes like the Rom-Com episode, Dr Sharon’s premature Season arc ending, and overall stop-start plot progression and character growth because of outside forces giving the Season new episodes – all to be a non-issue with people who are more interested in the show’s themes than the sum of it’s parts. And the themes are satisfying. When Roy made a huge romantic gesture at the end of the season, Keeley celebrated, kissed him, thanked him, and then gently let him down. She soothed his concerns and held her boundaries. And we’re given the impression that potential conflicts, truthful communication, and big swings into misses don’t have to end in disaster for a relationship.

Which is why “we” are so damn upset and mad at Nate.

From “We Need to Talk About Nate” by Jen Chaney, “[…] To their credit, the writers have been dropping justifications for Nate’s anger throughout season two like bread crumbs leading to Nate’s betrayal of Ted and the team. In that outburst Nate unleashes on Ted in the finale, he notes that Ted shone all kinds of attention on him during the previous football season, but in this one, after promoting Nate to assistant coach, Ted has paid him little mind. And even when Ted has acknowledged him, by implementing Nate’s False Nine strategy, for example, from Nate’s perspective, he’s receiving credit only because something isn’t going well. (Nate doesn’t realize his approach will pay off in the latter portion of the game, and when it does, he has already worked up a full head of steam that drives him off the pitch while the rest of the team celebrates.)

Nate isn’t wrong to feel this way. Ted doesn’t make nearly as much of Nate’s “wonder kid” coaching skills as he would have the year prior. He hires Roy as an additional coach, blindsiding Nate and making him feel less valuable. Ted even belittles Nate. In episode five, when Nate offers to talk to Isaac after Ted says they need one of the “big dogs” to do it, Ted laughs at him. Nate is emasculated again in the finale when he confesses to Roy, in front of the rest of the so-called Diamond Dogs, that he kissed Keeley. Roy, who already knows about it, immediately forgives him and assures him he’s not concerned. Why would he be? A guy like Nate could never legitimately steal Keeley from him the way that, in theory, someone like Jamie might.”

Not everyone wants to be deconstructed and reconstructed ‘better’ (eye-roll) just for themselves. Some people are so hurt, traumatized, and/or struggling that it is a PRIVILEGE to be working on themselves with no other outcome than just a healthier relationship with life. What is under the surface of this show since the beginning is how relationship is key. Rarely does someone step up for themself without a relationship that ebbs and flows deep enough for a desire to grow. No one is in deep relationship with Nate. No one. And that’s the key, Nate lashes out because he is actually left out and SEES it. And when he does reach out, he messes up and no one is there to walk with him through the disaster. He doesn’t need to be saved, he needs someone there with him through his struggles. Beard tells Ted that Nate needs a nudge, some personal attention. But Ted cannot be all things to all people all the time.

Again, not everyone has the privilege of working on themselves or being there for others. Some of us are just trying to get through each day.

And Radical forgiveness isn’t always well received. Rebecca is completely changed by Ted’s Radical Forgiveness in Season 1. She comes to the conclusion that she must tell the truth and is met with an upsetting up-ending of the cultural norm, but she ultimately thrives in that acceptance of forgiveness. When Nate decides to come clean to Roy, finding his comparison to Jaime’s folly to be comforting as he identifies as a fellow footballer, Nate is triggered by Roy’s instant forgiveness – not having seen the work Roy did to get there – Nate rejects the forgiveness as a shameful emasculating flippant and uncaring gesture of insult. Even just a moment of anger from Roy is a relationship he desires, he seeks engagement of any kind. And a full Season of betraying, mistreating, and confronting Ted is a part of that push and pull for attention.

More from Jen Chaney, “Nate also has the guts to say something to Ted that no one else has had the guts to, not even Dr. Fieldstone, who certainly should have: that Ted should be back in Kansas with his son. He can do all the FaceTiming he wants, but being in England means he’s not with his own child.”

Ted can be all things to only so many people, but until he goes back to being one important thing to his kid, Ted will struggle. I predict that we will never see Ted fully realized in this show, he is the person capable of taking on relationship in this show through his gifts, talents, and gentle heart. But we should keep our expectations low for what that ultimately means for Ted.

If you are deep in the deconstruction renaissance, I imagine that means that you’re on TikTok or an avid listener of podcasts or that you have found ways to connect with people like you in a virtual world and found insight beyond your previous physical circle of peers. So, of course you see the joy in Ted Lasso, the hope in at least ‘trying’ to connect and do better one step at a time. But remember that the key is doing this in ‘relationship’ and connecting to people first. Being in relationship, investing deeper in relationships around you will ultimately create growth opportunities through very messy and difficult situations. It’s not being ‘called out’ anymore, it’s being ‘called in’ – when done with care. It won’t always be as funny or sexy as when Roy or Keeley work through conflict, but it is still good for the soul. Don’t cut people out when there is an opportunity to first lean in for the work (this is a first step, not applicable to situations of verbal, mental, or physical abuse). The best way to connect, is over humor. So, if you’re looking for a way to start a hard conversation to connect with someone you desire to be closer to, I suggest trying, “Have you finished Season 2 of Ted Lasso yet?”

Disclaimer: If you felt called out because you don’t love Season 2 or Ted Lasso in general and this article felt like it was directed at you and your lack of interest in personal growth, you’re reading into it too much, it’s not all about you. But maybe it is? Examine that.