Pushing Through The Pandemic As An Independent Movie Producer 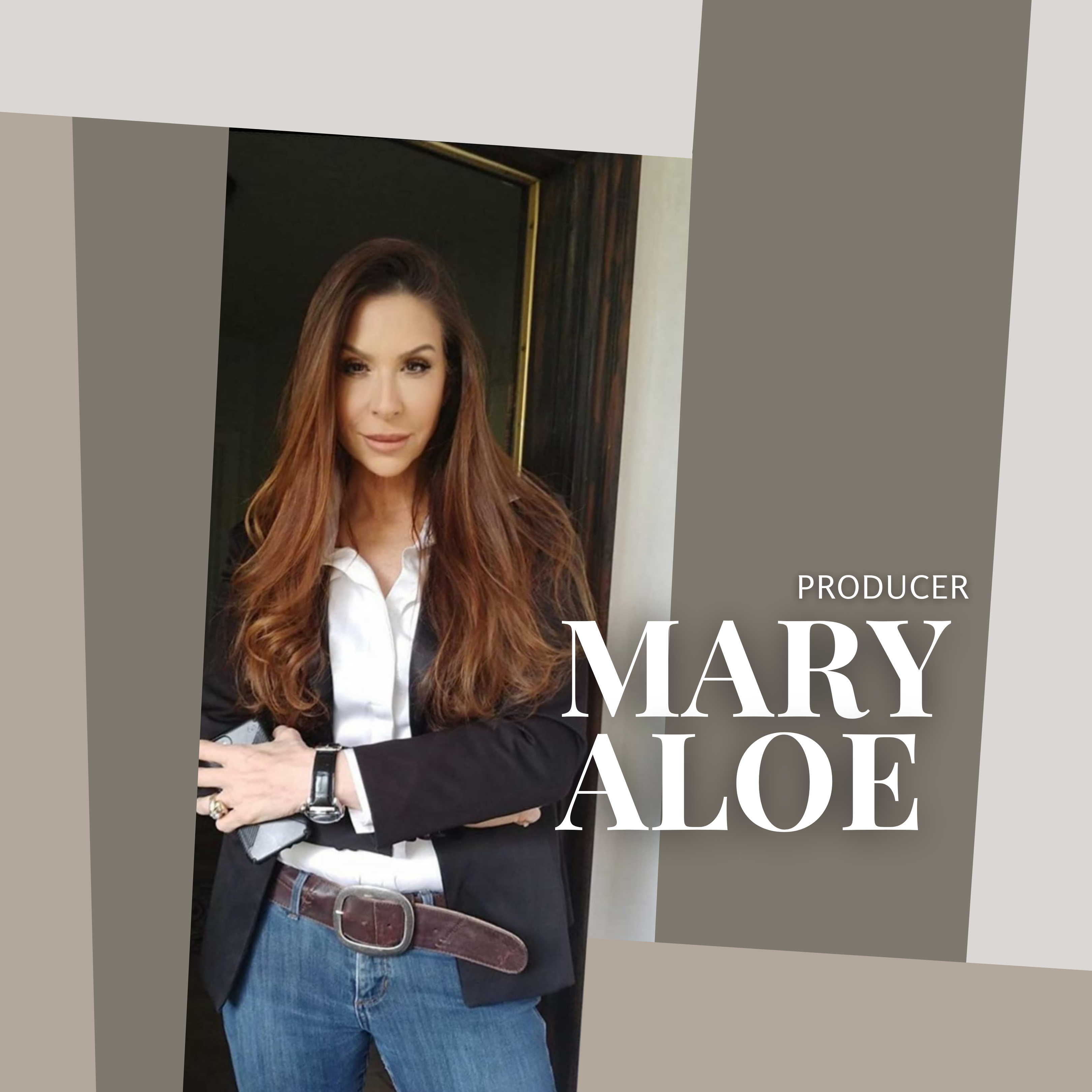 MARY ALOE and her team at ALOE ENTERTAINMENT have 4 movies coming out in Q 4 2021—how does an independent movie producer push through the pandemic?

You have four movies coming out in the next four months. Can you tell us about those?

We’ve got some great stuff coming out. Three films are being released in the next three weeks, which is kind of crazy. Flag Day just hit theaters today in the US with a limited release at select theaters through MGM’s United Releasing. Flag Day is directed by and starring Sean Penn and a breakout performance by his daughter, Dylan Penn. His son is in it too, Hopper Penn, and it also stars Katheryn Winnick, Josh Brolin and Regina King. It’s a true story based on one of the biggest counterfeiters in US history. John Vogel’s daughter, Jennifer Vogel wrote the book that the movie is based on. I would say at the heart of it—it’s a father-daughter story, that’s really what it’s about. Flag Day premiered at the Cannes Film Festival this past 2021 to incredible reviews.

We also have Worth coming out on September 2nd on Netflix with Barack and Michelle Obama’s production company, Higher Ground Productions. It premiered at the Sundance Film Festival in 2020 right before the pandemic hit. Hillary Clinton came to the premiere at Sundance which was exciting. I got to spend a little private time with her outside of a bodyguard but, you know, the film received standing ovations and deservedly so. It’s the story of Ken Feinberg who was assigned by the government to value what each person’s life was worth in dollars. Let’s say a CEO gets this amount and the family would get this amount, or a child only gets this amount, or a fireman only gets this amount based on economic loss—he was playing God but had a complete arc, and truly how is one life more valuable more than another? Michael Keaton plays the real-life attorney Ken Feinberg, who ran the 9/11 compensation fund and Stanley Tucci plays the real-life Charles Wolf, whose wife dies during the tragic events of 9/11. The rest of the cast is incredible, Amy Ryan, Laura Benanti, and the movie just turned out so beautifully directed by Sara Colangelo.

Karen is a smaller budgeted film but with a big bite. We brought the global Karen meme to life in this satirical racial justice thriller. What’s so exciting is we have the real-life attorney, Ben Crump, who’s the attorney for the estates George Floyd and Breonna Taylor and more. He’s not only in our movie, but he is also an executive producer. It stars Taryn Manning as Karen, and that’s coming out on PVOD September 3rd.

Bruised premiered at the Toronto Film Festival 2020. Netflix bought it opening night of the festival. Netflix will release the film in Q 4 of this year. It’s extraordinary work by director and star Halle Berry in front and behind the camera. It’s somewhat of a cross between the Champ and Rocky, but a female fighter; an MMA fighter who hung up her gloves basically and lost custody of her son, as she was fighting her own inner demons and because of the death of her husband, her young son is brought back to live with her. She has to get her life together and go back in the ring. It’s an extraordinary female empowerment, inspiring story.

How does an independent producer push through the pandemic?

That’s a great question. When the pandemic first hit, we were going to do a movie an incredible true life crime comedy with major stars—I loved it at first pitch from one of the major agencies. My financing partners and I had escrowed the money and were in as well as producers and then the pandemic hit! It was to start one week officially in March 2020 right after it all hit and they needed an extra $1 million at the time because of COVID so the rightsholders went with the studio and the agency, foreign sales team—all of us got ousted and a studio came in to finance it. We understood it—just had a big sale. It’s bittersweet, so we were left with a special thanks only on the movie. But I am happy for them. So, my myself and my team, we did get affected by pandemic early on—on that movie. I had to really sit down for a second besides prayer, which I do every day, and really understand, how do we get around this, right? This is a beast. Unless you were around in 1918 most of us have not dealt with a pandemic before. And so, it was very difficult and all of us had to work our way around it. We do a lot of placing of equity and mezzanine and we also produce our own movies. Maybe if we’re going to put money in other people’s, maybe we come in at movies that have already been shot and in post production. We’re not going to take the risk that the movie will go down.

One of the things I did. I put an APB out to all the agents that I work with. I work with a lot with great agents, managers, foreign sales companies, other production companies and producers. So that came in and we ended up putting money into one movie. The other thing I thought about is, okay, let’s find a great animated film, right? Because with animation, you’re in a booth by yourself; the stars are doing their own voiceover. It’s very solo-oriented. There are people working on it in different countries, but there’s a way to work on animation without stopping versus on a set if COVID hit. So, we found an incredible one called Groove Tails. That’s co-written, starring and produced by Jamie Foxx and good friends of mine, Michael Becker and Maryann Garger. We are looking for another animated film, but it must be on that level. That was another way to work around this beast called the pandemic.

The other way is that we did a lower-budgeted movie in Atlanta, and I said, okay, we’re going to actually do a movie during the pandemic. We must be as risk aversive as possible to the investor which is most important here- outside of the most important issue which are people’s health- their lives. We said we can produce a movie if it is under $5 million dollars versus our $10-25 million dollar films we have coming up. We pushed those to 2022. I would advise that unless you are a big studio and you have a ton of money, but as an independent producer, I think we can push through at lower budget films. So, we did that as well with the satirical, racial justice thriller Karen coming out on PVOD on September 3rd. A couple of other movies were shot pre-pandemic. They were in post, which is obviously conducive to working during the pandemic.

What are you concerned about most, and do you think there’s a light at the end of the tunnel?

Well, you know, I’m a faith-based girl, so I’m always going to see the light at the end of the tunnel, even if there doesn’t appear to be at the moment, but I have to live in that faith. And I think all of us have to live in the faith and hope. I always say they go together because if not, what are we doing? I think we started to see it. So many people, including myself, got vaccinated. I know there are many that have not. I have my personal feelings about that. Suddenly, we’re seeing the surge of the Delta virus coming now and I’m reading about another one.

I will say that because there are so many smart people. So many people have—and I’m talking about producers like myself, financiers, studios—learned to navigate through this well for the amount of time that we had, essentially since the first quarter of 2020. The virus is back, but I think we know how to deal with this beast a lot better. I’m certainly not a medical expert, but I do think that we’ve done miracles during this time. I think that production is going to continue, and I think that we’re going to get better and better if the virus keeps surging to learn how to navigate through it. The most important thing is keeping people safe—their health!

What are the financial risks associated with the pandemic, and what toll has it taken?

I don’t like to use the word “lucky.” I don’t believe in luck, really. I think it’s about opportunity and taking it. So far, we’ve been doing well, but I’ve had friends that have had their productions go down. Every single one of them that went down, the ones that I know, ranged from $5-20 million. They did go down for a couple of weeks and then went back up. They did incur some extra costs, but they made it work. I would say that’s the risk. And obviously there is Covid Insurance, but at least in my world, the independent world, it was very expensive. Some producers and productions can afford it—hopefully those rates are and will continue to come down for us tried and true independent filmmakers—whether our budget is $5 million or $25 million. I think there’s always that risk, you know, there’s a heightened risk that the movie could go down for a couple of weeks. You could incur a few more expenses, and you have to know that going in. You have to be frank with the investors going in about that. I think that’s an easy thing to explain because they’re experiencing the pandemic as well, but if you have a great team and experienced line producer—hopefully it’ll come back up if it’s two, maybe three weeks later—even if they have to sequester that individual or individuals who unfortunately contracted COVID for the time being.

What’s next for you?

Well, the direction that myself and our team at Aloe Entertainment are going, while we still like to place equity and mezzanine financing in films, we are starting to do more in-house movies that we own and have fully developed from the ground up. I’ve co-written Birdseye and co-written Armistice. I have another movie I am under an NDA. I’m a lead producer on another film, Girl Who Fell from the Sky. These are all exciting pictures with (surprise) strong female leads. We feel very comfortable and very confident in them as potentially great upcoming films. We’re very excited about the casting, the directors—we have great agents repping them. We are very excited about 2022—the teams brewing, doing movies in Georgia, Puerto Rico and overseas, Eastern Europe and some other places coming up, so we are obviously staying close to the weekly updates on the pandemic. We’re hoping if there is a new virus mutation, and (that’s what’s happening now), with this amount of time for those movies, we can learn to navigate through it respectfully, professionally and personally.

There are going to be obviously a lot of movies coming out that were pushed back from the studios. I’m looking at box office numbers, right? And, you know, God bless a lot of these theater owners. The tentpole movies—Black Widow, A Quiet Place, the Marvel movies, The Fast and Furious movies, the big franchises—they’re doing great at the box office. Not everyone has had the opportunity financially to do what we’ve done. There are many suffering, but I think for many of us in the movie market, looking at the box office numbers, I think there’s a lot of hope and I think there’s a lot of light at the end of the tunnel. I’m hoping that my fellow independents filmmakers—whether they’re a producer, financer, director, writer, or all the above—feel that sense of faith and hope as well, because that’s what you have to keep.