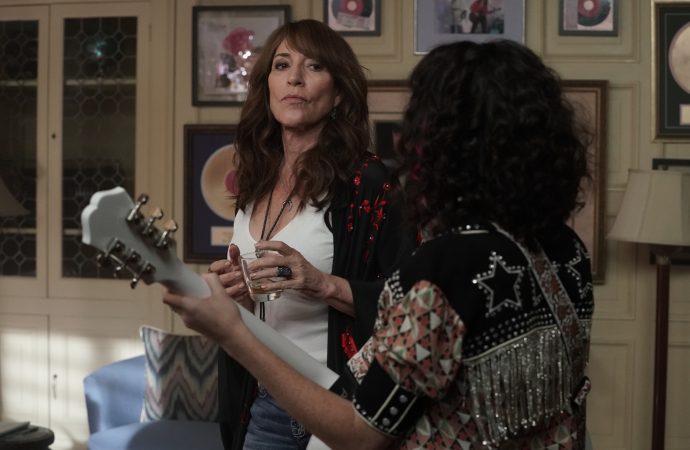 A Film Premiere Review. *No Spoilers*

I have a lifelong love of Katey Sagal, but this movie proved to be even better than a goggle-fest at her natural intrigue. Sagal is powerful, cunning, a stunner, a singer, and unpredictable. She is dangerous from the moment we see her. A loose cannon, never knowing what she will do next. Yet, she keeps pulling you in deeper and deeper.

Synopsis: Blumhouse Television and EPIX present the cautionary tale of a rise to stardom set in the iconic Nashville Country Music scene. Two friends, rising artists on the brink of a big break, will do just about anything to realize their dream – including a pilgrimage to the legendary and reclusive Harper Dutch’s (Golden Globe winner Katey Sagal) mansion in the hopes she’ll record a song with them. While their life-long idol seems intent to help, the visit devolves into a twisted series of mental and physical torment as the pair discover Harper – and each other – may have other motives. With no other choice and desperate to record a song, the duo must go to dangerous lengths to prove their dedication to their dream of becoming Nashville’s next country music stars.

Abby Quinn as “Jordan” is captivating. She is our audience proxy, much of our experience is measured in her response to the energy changes and waves of power dynamics. She is our ‘one to watch’ and experience this story. Abby shows us a lived-in, hopefully yet truthful artist. Abby freely shows us “Jordan’s” inner life. She isn’t a mystery, we connect right away in this. Alexxis Lemire as “Leigh” is bright. She represents the voice for ambition, idolatry, glamour, and our dreamer. Our calculated dreamer. She is cunning, a little Katey Sagal in the making. Alexxis is patient and measured in her response to the walls closing in. She is deliberate and flexible beyond reason. A great performance.

Director Brea Grant crafts a perfectly paced, exciting and pleasurable movie experience from beginning to end. Her attention to the unveiling of facts and inner ‘locked away’ thoughts is masterful. We slowly get down to the basement of what’s really happening only to discover we are ready for the recording studio upstairs yet again. The levels to which she keeps the frog distracted in the boiling water is surprising, over and over I stuck with our characters and gave grace and empathy beyond my natural capacity. The casting, the sets, the costumes, the music, everything excelled. And I just couldn’t get over how much the movie dissected important issues with ease.

From “‘Torn Hearts’ Director Brea Grant on Fist Fights and Southern Hospitality” by Kelly McNeel, Grant explains her emphasis on theme in, “I didn’t want to judge any of these women, I wanted to come at it from a place where they all were doing things that they had been taught to do, or they were trying to go against the system, they all were trying to win over this impossible system in their own way. And if there is a moral – which I do not like morals in my movies – but if there was one, it’s when women fight, they lose. Which at some point, Katey’s character says, and I think that we’re in this industry where we are pitted against each other. There’ll be one project, and five of my female director friends, we’re all pitching on the same project. But all my male friends are pitching on different projects, and it just seems so weird that we all get brought in for the same thing over and over again. Like here’s a slate, here’s the one woman directing the movie, or the one woman in the cast, or the one female DP, it feels like we’re all being pitted against each other for one role. One job. And I just wanted to kind of get that across, that we’re it’s a system that’s built to make us lose.”

The layers in this movie are astounding. I sat in my feelings after the film, reeling from all the issues that this movie brought up for me as a female creative and my experience in the entertainment industry. The idolatry of fame is only one of the many issues covered in this feature. The classic approach to the story, frog boiling and hints of misery, gave space for a ton of relationship conversations – great honest reframing of our leading duo.