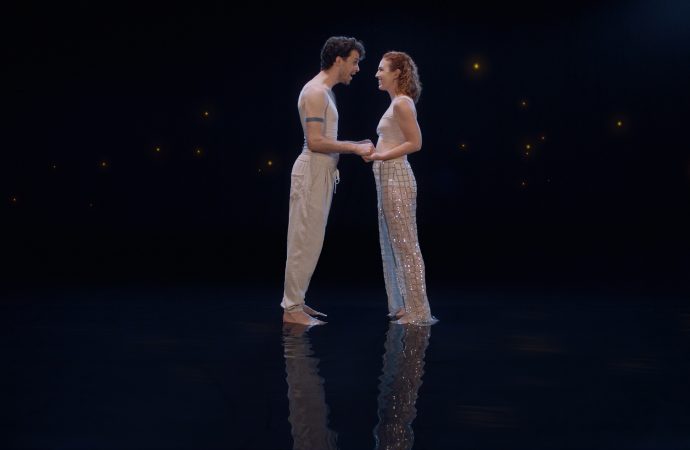 A film review AND interview with Stacey Maltin and Jay DeYonker.

For the most part, this film feels like it was made by musical theater millennials. And this is a big compliment from me. They are bright-eyed. There is so much heart. And so much thought from the gender role reversal on the screen to the green-efforts on the sets, this team must be in deep puppy love with one another. Their real-life familial love is evident. And the talent in this film upends your expectations, everyone is a STAR!

“Importantly, the filmmakers made the intentional choice to “flip the script” by having the man in this scenario decide that he wants a baby.  Very rarely do you see a man, in the midst of a successful career, question when it’s the right time to have a child, what it might mean to his career, and whether he’s willing to completely change his life in order to do it. That’s because most of society sees the onus of child-raising and bearing on womxn; but, the people in this ever-evolving world are part of all types of familial situations that break the barriers of tradition.” Learn more HERE

Let’s walk through this powerhouse cast: Stacey Maltin (Writer/Director/Star) lights up the screen. She is a smiley, energetic, and a career-driven hopeful. She knows what she wants and she sets aside her feelings as much as she can to make the best choices for her goals. Her excitement for life is infectious. She loves big, but chooses to limit the collateral damage. Maltin’s persistence doesn’t stop, ever. This is painful to watch for people, like myself, who work in a cutthroat industry where sacrifice is considered ‘hustle’ and anything short of 100% is a betrayal to the team. She is a tyrant in her love.

Margarita Zhitnikova (Producer/Co-star) is measured, controlled, and a surprising stand-out emotional player. Their power is gentle and quiet until they morph into this matriarch of strength and divine wisdom. This performer blooms in front of us and leans on the big picture in life, career, and love – they have it all figured out by the end. They are the anchor, the glue, and the selfless one. And it seems to come naturally.

Jay DeYonker (Co-star/Co-writer) is soulful, giving every inch of himself to every frame. And he can’t keep his gosh-darn loving hands to himself – but luckily it’s all enthusiastically welcomed and consensual. You will get lost in his eyes. His big puppy-dog eyes. He is the most seamless ‘real life’ -to- ‘musical life’ transitional performer because his intensity never falters. DeYonker is beautiful to watch. He captures the heart of the movie.

TRIPLE THREAT is electric. And the team is extraordinarily talented. And I’m not the only one who thinks so: WINNER of the Jury Award and Audience Award for Best Feature Film at the Blackbird Film Festival, WINNER of Best Ensemble Cast for Stacey Maltin, Jay DeYonker, Margarita Zhitnikova, Catherine Curtin, Mark St. Cyr, Aury Krebs, and Aramie Payton at the Art of Brooklyn Film Festival, NOMINATED for Best Feature Film and Best Actor for Jay DeYonker at the SOHO International Film Festival, and NOMINATED for Best Director for Stacey Maltin at the Twister Alley Film Festival. A smash at festivals across the country, this is a must-watch with your favorite artists and collaborators.

Here is one of my favorite quotes from the movie:

I got the chance to interview writer/director Stacey Maltin and co-writer/leading actor Jay DeYonker,

DeYonker: “Stacey’s idea for the screenplay came first. Then she managed to use her connections to meet with the fantastic Carner & Gregor who agreed to let us use Firefly, a wonderful and complex song originally written to be sung by one person. To my surprise, writing the screenplay was much smoother for us than writing Firefly the musical. We knew early on that the musical within the story, the art within the art, absolutely had to connect to the overall themes and conflicts we were exploring and that wasn’t easy to figure out.”

Maltin: “…The initial idea spark was to flip the script on the desire for children and place a man in the role of the one who hits 30 and wants a child while his female creative collaborators are more focused and career driven. I’m also a huge musical fan I’ve been doing musical theater since I was a little kid so this film is an ode to musicals for me. When we realized that we couldn’t just tell about making a musical we needed to show it, we dove right in to the very complicated process of intertwining the film story with the story of Firefly the Musical. At all points it was essential for us that the musical story be utilized to push the film story forward so that was always at the forefront of our minds in how the music and choreography worked in the larger context.”

Maltin: “I love this question! This was not mine and Jay’s first sex scene or first time we’ve played romantic opposites in a project. We’ve been choreographing dances and making art together since we were teenagers being crazy running around New York City. While our personal relationship is based in friendship we have a natural chemistry and ease with each other that makes it fun and easy to be intimate in the context of art together. We’re both queer, we’re both sex positive, and we both are open when it comes to boundaries so filming the threesome was honestly super fun. Michael who plays Liam in the film was also super down for whatever. We had a rehearsal where I went through different ideas I had for the scene and all of the beat by beat emotional moments that needed to happen, and from there we found the “sex choreography” that we were all comfortable with.”

In writing for the stage inside the screenplay, who or what were your inspirations?

DeYonker: “So this was a challenge! Firefly the song was in fact the initial inspiration. But we quickly realized that we were going to have to dig deeper and really flesh out what this musical was going to be...”

Maltin: “BE MORE CHILL was a big inspiration for Firefly the musical. I loved the trajectory it had gone through with premiering at Two River Theater, moving to Off-Broadway and then after getting a big amount of traction through the soundtrack on Spotify and with a social media following eventually moving to Broadway. I definitely thought about that a lot while writing the journey for Firefly and we give a little shoutout to Be More Chill as an homage. SPRING AWAKENING and RENT were also big inspirations. Firefly the musical started out being inspired by the 7 Deadly Sins and we sort of ran with it from there. We imagined an ensemble of 7 misfits stranded on a mystical island together who needed to find their inner light in order to return to their original lives.”

DeYonker: “In fact, we shot much more of Firefly the musical than the film audience gets to see. For the story, we dug into Greek tragedies, Shakespeare, and more before attaching the book to the 7 deadly sins (which I doubt anyone would even be able to tell!).“

What is your sincerest hope for this film’s journey?

Maltin: “I hope that audiences come away with a sense of hope, joy, and energy to follow their dreams. This is the film I wanted to see as a young drama nerd with big dreams of making art in New York City. And I hope they come away singing and dancing along to the music!“

DeYonker: “From my role in this project, I hope people enjoy watching queer people live authentic, confident lives. I hope they see a man in a way they haven’t before. I hope they laugh and feel entertained and… maybe even uplifted!?”

In what ways did you grow as writers, artists, and performers in this process?

Maltin: “With every new artistic project you learn something and grow. I learned so much about writing and editing and paring down through the process of finishing the film.

DeYonker: “Immeasurably. And a lot of the growth happened once we wrapped the film, in looking back at what we had done, in examining the mistakes we made, and in relishing the victories we had...”

Maltin: “…I grew as a collaborator by learning from and trusting my cinematographers and producers. And I learned to trust my own voice and instincts. When you’re making a personal story I think that you have to know when to take feedback and when to go with your gut and trust yourself and making this film was a huge test run in all of that. I’m so proud of my team and what we accomplished and just very excited for this film to be coming out into the world.”

DeYonker: “…There is no question that being a part of this film has helped me find my inner light. Hope you enjoy and shine on!”