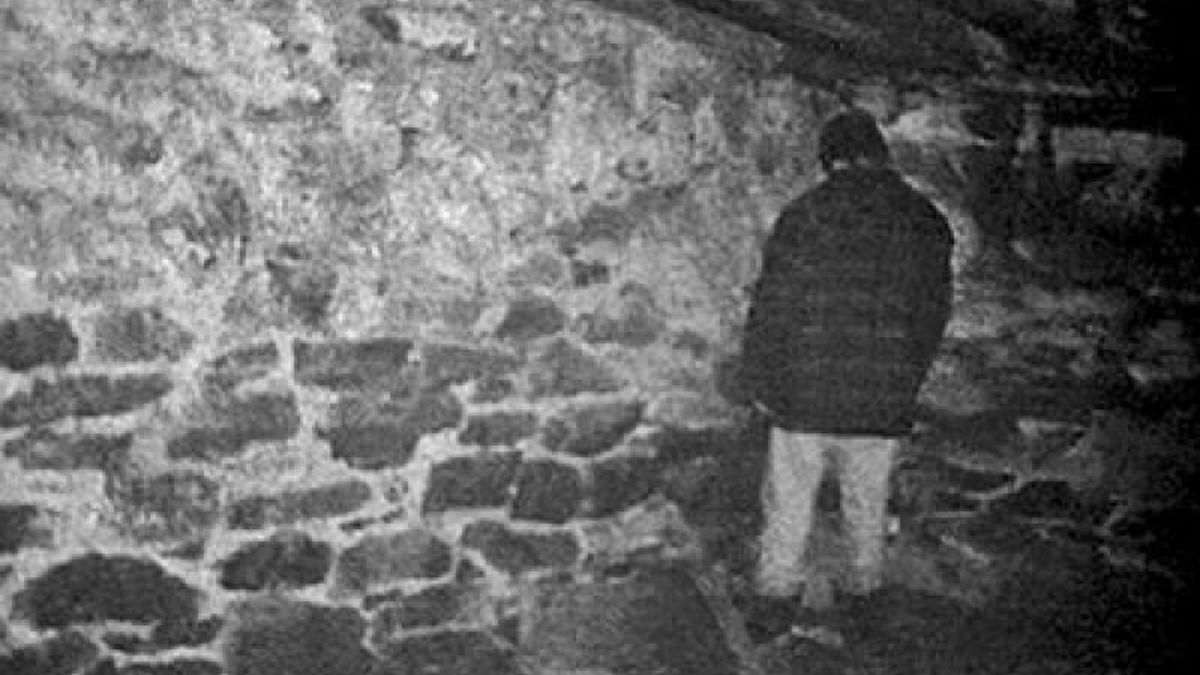 In the “best year of movies” there were three flicks that would come to represent the cultural zeitgeist of 1999.  The Matrix (I discussed back in March), The Phantom Menace (for which I contributed my own piece of “internet rant” back in May), and The Blair Witch Project (released July 30, 1999).  It could be argued

In the “best year of movies” there were three flicks that would come to represent the cultural zeitgeist of 1999.  The Matrix (I discussed back in March), The Phantom Menace (for which I contributed my own piece of “internet rant” back in May), and The Blair Witch Project (released July 30, 1999).  It could be argued that Sixth Sense and/ or Fight Club could be added to that list, but the point is that it seemed that everyone and their grandmother was talking about these three movies in particular.  They were covered on everything from local news and late night talk shows to “message board posts” on this new fangled thing called the World Wide Web.  And in the ensuing months and years, these movies were parodied and imitated ad nauseum.  And probably most impactfully, they announced what commercial filmmaking in the decades to come would be all about.

The Matrix told “an old story in new ways” with groundbreaking special effects and by tapping into an internalized fear within its audience.  The Phantom Menace was the “dark side” of that coin by showing the power of the almighty IP (intellectual property), thus proving to risk averse Hollywood execs that one can ensure a profitable movie with a built in/ established brand awareness, actual quality be damned.  The Blair Witch creators (directors Daniel Myrick and Eduardo Sánchez and the trio of cast members who shot and improvised their performances) created an entirely new form of storytelling by utilizing new technology in both the film’s production and release.

The “found footage” sub genre had precursors like Cannibal Holocaust and Man Bites Dog.  You could even step back a bit and see elements of “found footage” in the very DNA of the genre from the diary entry/ telegram/ newspaper headline structure of Bram Stoker’s Dracula novel and Orsen Welles panic-inducing radio adaptation of War of the Worlds.  Even less sung about are the “shot on video” backyard opuses like The McPherson Tape and The Last Broadcast that came out in the years before.  But it was Blair Witch that came to define “found footage” and provided the framework for every film in the sub genre that came after.

Blair Witch was even ahead of its time in many ways because it took a few more years for “prosumer” digital cameras and editing software to catch up and allow filmmakers the ability to create something approaching “cinematic”.  Therefore Paranormal Activity in 2007 truly opened the floodgates to the “found footage” horror film.  But at the end of the day, all the “found footage” films stood on the foundation that The Blair Witch Project built.  And in the ensuing years, critics kept foretelling the eventual death of the “found footage” trend in horror and with the many clunkers turned out it was hard to argue with that sentiment.  But then, there would be cool twists on the concept like the Unfriended movies and the torch would be carried on a little longer.  Even “reality television” would all but adapt the Blair Witch playbook with series’ like Ghost Adventures and Finding Bigfoot.  So whether “Film Twitter” likes it or not, “found footage” is here to stay as a form of storytelling.  But, there had to be a “first” and Blair Witch is one of the handful of movies that came along and started its own sub genre.

Now the Blair Witch naysayers are quick to criticize its muddy/ grainy “shot on video” addled cinematography (and portions with black and white 16mm film).  But whether inaccurate or not, Blair Witch came to represent the first “digitally shot film” and now today with nearly everything shot and projected digitally, for all intents and purposes “film is dead”, and Blair Witch was the first successful “film” to announce that sea change.

And there was of course the ingenious marketing that touted the film’s release as something of a snuff film.  The web site gave “clues” to the mystery.  There were “supplemental materials” like the faux “talking head” documentary Curse of the Blair Witch (which some say is superior to the actual film).  The filmmakers created a whole lore for a movie that was basically stitched together and remixed versions of various urban legends.  But they had enough tantalizing carrots dangling out there and then there was a Y2K level of “possibility of doubt” about the whole thing (“Yeah, but maybe it’s true, you never know!”).  In short, the filmmakers made the audience an active participant in the film.  People going to watch Blair Witch weren’t just looking for some cheap scares, they were made to feel like they were part of something bigger than themselves.  The filmmakers basically created a conspiracy theory cult of followers (i.e. “fans”) with a website and some Hi8 tapes.  The whole conceit of the Blair Witch Project is ingenious.

But I’m not really talking about the actual film.  Because the truth is that it doesn’t really matter.  For the record, I dig the movie- I think it’s pretty effective (yes, even today) and the directors and cast did an amazing job of turning their “weaknesses into strengths”.  It belongs on the Mount Rushmore of “indies that made the big time” like El Mariachi, Clerks, Sex Lies and Video Tape, Slacker, etc.  It will probably be an aspirational movie for us amateur/ hopeful filmmakers until the end of time.  But as these things go, Blair Witch had an almost immediate backlash creating a sentiment that still holds true for many people.  “It’s just some wannabe directors that gave a few local theater actors a couple cameras to wander around the woods and go camping… boring!”  Yeah, that’s true.  It’s also a nearly 250 million dollar grossing hit based on that “simple and stupid idea” that I didn’t think of- and no one else did either- much less who went out and made the damn thing.  Blair Witch is the “one in a million” idea.  The American Dream.  The elusive unicorn.  Often replicated but never duplicated.  It’s a classic.

The last word uttered in the entire filmogrpahy of Stanley Kubrick is “fuck”.  Which is fitting because there’s a whole lot of f’ing going on in his last completed film before his death, Eyes Wide Shut (released July 13, 1999).  But it also seems on brand for Kubrick because his entire career was spent pushing envelopes/ boundaries with his art which would often lead to a polarized audience and divisive critical reactions.  The line at the end of Eyes Wide Shut feels like Kubrick throwing down the gauntlet/ mic (or whatever metaphor you prefer).  It was as if he was saying; “I know most of you aren’t smart enough to digest what I just gave you, but here you go anyway… fuck off”.

And the truth is, I don’t feel “smart” or “academic” enough to properly break down all the precise (and maybe OCD fueled) filmmaking and metaphors/ themes in Kubrick’s work.  And apparently most people aren’t either because with nearly every one of his projects Kubrick would get the “last laugh” on all of us.  Whether it be Clockwork Orange, Full Metal Jacket, Barry Lyndon, Lolita, The Shining, etc., all were “misunderstood” and even seen as disappointments when they first came out.  But over the years, the consensus on each of these movies shifted and they would each be reappraised as classics.  Though not often seen as a “cult” filmmaker, Kubrick’s movies all seem to be hidden gems that get “discovered” by cinephiles and held up by top tier filmmakers as being the “real deal.” (Kubrick is probably your favorite director’s favorite director).  His films “age like wine” and seemingly get better the more removed they are from their release dates.

Which is probably a sign that Kubrick puts in a lot of thought and consideration within each frame of his films.  Script development for one of his movies would take decades. He was notoriously known for an absurd amount of takes and shooting days to achieve his vision.  Case in point, the Eyes Wide Shut production lasted 400 days (for context- principal photography for the entire Lord of the Rings trilogy was about the same) and an actor in the film (and accomplished director himself, Sydney Pollack) said it took three weeks and 200 takes to shoot a ten minute sequence of mostly dialogue.  On one hand, I think his methods seem a little too much and unnecessary…  but then again- I’m no Kubrick.

My main take away from this last viewing is that Kubrick was showing that people use sex for nearly everything except “love”.  In the film, sex is transactional. It’s used to hold power over someone, to instill jealously, enact revenge/deception, and (at best) is an act of primal lust.  Kubrick also seemed to suggest that marriage is a farce because “minds wander” and there isn’t such a thing as “true love”.

Kubrick seems to leave Cruise and Kidman “lost” after they have this “peek behind the curtain” of true power and wealth.  I think Kubrick is saying that we’re all terrible people that treat each other like crap while also being “cogs in a wheel” with puppet master(s) stringing us along.  And there’s really no hope in trying to change things unless you want to be miserable or, at worst, dead.  So all we can do is go through life with our “eyes wide shut”, aware of the grand sick joke of it all.  But to paraphrase the last scene: “No dream is ever a dream.  But we’re awake now.  And we should be happy with what we got.  And there’s one important thing we should all do as soon as possible… and that’s fuck.”

Another article down.  There were a lot of movies released in July- but I’m in the mood for a ’99 creature-feature double feature with Lake Placid and Deep Blue Sea.