Reviewing Movies Like it’s 1999: DETROIT ROCK CITY and OUTSIDE PROVIDENCE 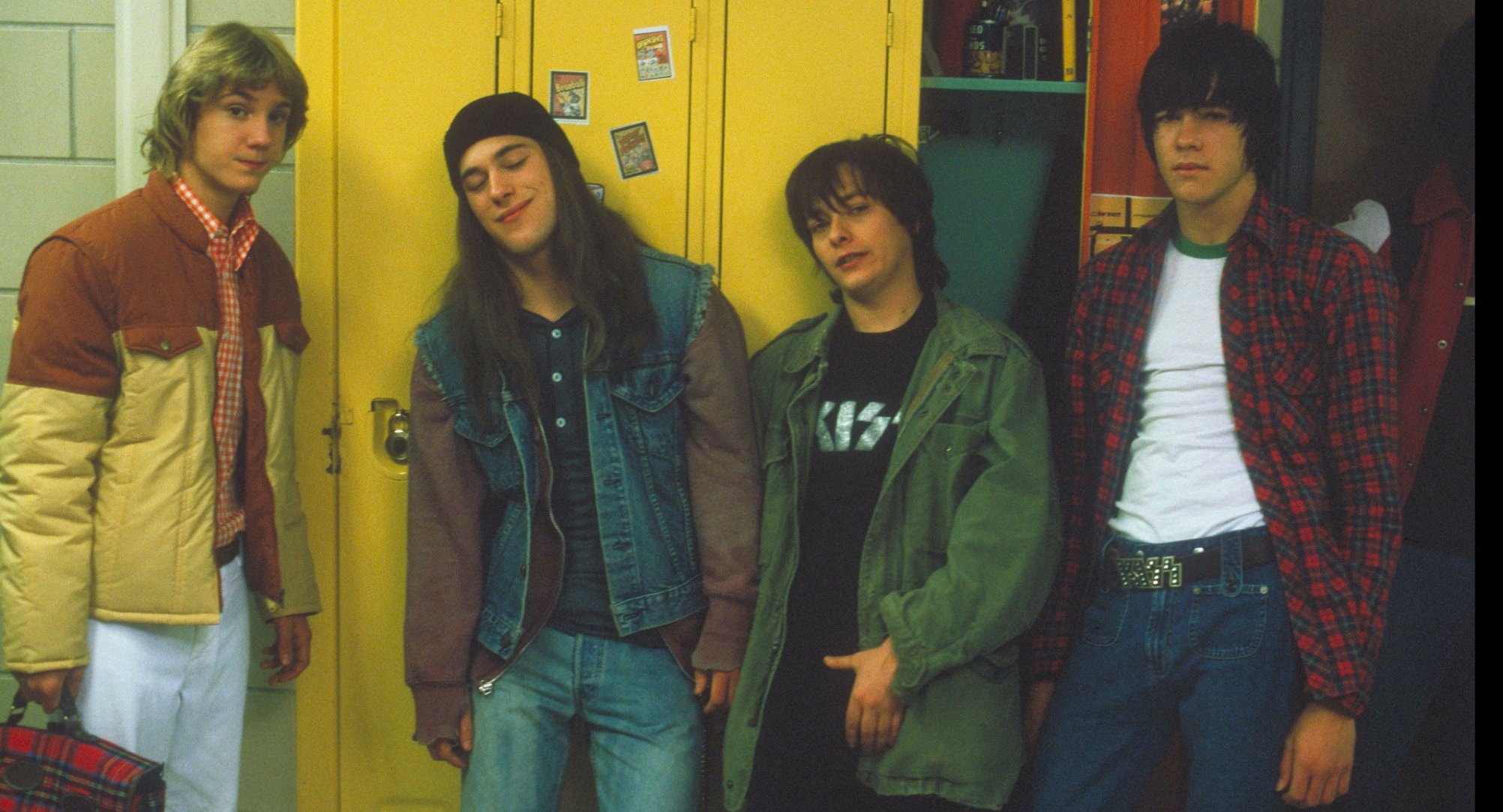 With today’s Reviewing Movies Like it’s 1999 column we’re talking about a duo of stoner comedies released around the same time and both seeped in 70s nostalgia. Detroit Rock City (released August 13, 1999) serves as an extended infomercial of sorts for KISS– both for their music and the concept of being part of their “Kiss Army” (i.e.

With today’s Reviewing Movies Like it’s 1999 column we’re talking about a duo of stoner comedies released around the same time and both seeped in 70s nostalgia.

Detroit Rock City (released August 13, 1999) serves as an extended infomercial of sorts for KISS– both for their music and the concept of being part of their “Kiss Army” (i.e. buying merch).  The band, who never met a licensing opportunity they didn’t like, had been involved with one prior film, the hilariously ill conceived made for TV opus KISS meets the Phantom in the Park (which crops up on the occasional “so bad, it’s good” movie list).  Therefore the publicity for Detroit Rock City attempted to throw shade on that flick by promising that “this was the real KISS film” and it was more reflective of the bands’ ethos and loyal fan base, while also serving as a “love letter” to the whole 70s hard rock era that boomers can’t get enough of… by mostly pillaging the Kiss catalogue for choice needle drops.  In translation, the movie Detroit Rock City followed the template of raunchy teen comedies of the era (think American Pie/ Road Trip) concerning a quartet of slacker potheads who embark on a pilgrimage to Detroit in order to get into a KISS concert while facing all sorts of politically incorrect misadventures along the way.

If the movie was designed to lure more folks to the KISS brand it all but failed because it was a theatrical bomb on release and based upon my shallow bit of research the movie actually helped break up the founding members (the band we see performing today have two replacements wearing the make up).  Gene Simmons allegedly ran roughshod over the production to the point where he only allowed the “songs he wrote” to be used in the film And this is despite there being a character/ love interest named “Beth” and they glaringly never use “Beth (I Hear You Calling)” on the soundtrack.  At any rate, much like the band KISS (and their music) the movie Detroit Rock City is “not that great” when put under any degree of critical scrutiny.  But also much like the band/ music there’s plenty of exuberance/ theatrics and an overwhelming desire to entertain that you can’t help but eventually succumb to its charms.  And perhaps the film worked as intended after all because there does seem to be an appreciative cult following and/ or on line defenders for this flick (and not necessarily die hard KISS fans either).

I think what director Adam Rifkin manages to convey is the excitement and anticipation of “boys on the cusp of being men”- i.e. a bunch of awkward goofballs with a world full of possibility in front of them.  The all around likable cast perks things up too (give or take a now unfortunate Ron Jeremy cameo).  MVPs of the movie include Natasha Lyonne (who was having a hell of a run for “late 90s IT girl” with output like Slums of Beverly Hills, American Pie, But I’m a Cheerleader, and this film) and a pre- Paranormal Scream Queen Lin Shaye as the Mom who burns the KISS tickets and gets the plot rolling.  Then there are the four guys; the charming Giuseppe Andrews and Sam Huntington (who all the girls were crushing on back in the day, or so my wife tells me), James DeBello (even though he’s more or less doing a Jason Mewes impression), and headliner Edward Furlong.

These days, it’s hard to find any Eddie Furlong fans out in the wild so I feel like I’m on a lonely island because I have a big soft spot for Furlong movies.  Of course, a lot of this reverence has to do with me being around the same age as Furlong when he was cast in Terminator 2, playing a 12 year old kid (and future leader of the human resistance against the machines) who got to hang out with Arnold Schwarzenegger. I mean, what could be cooler than that?  To top it off, he was a SoCal suburban brat that came from the same area I grew up in (big up to Tujunga/ Glendale). And so I kept up with his career and for a minute there things seemed promising. He starred in the pulpy teen horror flicks Pet Sematary 2 and Brainscan, which made for fun rentals during sleepovers (accompanied by Domino’s Pizza).  And Furlong started notching some impressive “indie street cred” in late 90s with flicks like Pecker, American History X, and Animal Factory.  But unfortunately, Detroit Rock City represented his peak because the usual plagues of child actors would take hold in the 00s and a quick perusal of his IMDb shows the projects got more sporadic and lower budgeted after this film.  But alas, I’m still over here rooting for a Furlong comeback.

Outside Providence (released September 1,1999) shares a lot of the same elements of Detroit Rock City by following an amicable dumb ass (played by Shawn Hatosy) in a coming of age tale set to a period 70s rock soundtrack with some marijuana laced humor.  But whereas Detroit Rock was a goofy romp, Outside Providence is a much more layered film and deals with themes involving the complicated relationship between sons and fathers, the loss and emotional grief resulting from a suicide, mental health, physical impairment, first love, the meaning of masculinity, and homosexuality/ phobia.  And the film does all of this in a much more thoughtful/ nuanced way than one would expect from a stoner flick.  In fact, one of the aspects that I always appreciated about Outside Providence is that it treated its marijuana enthused characters as -yes- comic relief, but also with humanity and as real people.  I also think the film ages better than most “stoner comedies” and films with these type of archetypes because it doesn’t follow the trope that the stoner character has to quit smoking weed in order to grow as a person (think the character arcs of the later day Jeff Spicoli’s in Clueless and Don’t Tell Mom the Babysitter’s Dead).

The Farley Brothers wrote the script for Outside Providence (based upon their autobiographical novel) and are of course better known for their offensive raunchy comedies (and apparently were set to direct this film but scheduling conflicts with There’s Something About Mary prevented it).  So the movie is funny of course but it also has some really touching and emotional scenes.  Which is a trip when you realize it’s from the same guys who did stuff like Dumb & Dumber and Kingpin.  On one hand, the movie is more of a pastiche tale of a slacker finding his way through life with maybe too many montages set to 70s rock tunes.  And the Farleys’ story also appears to be missing some connective scenes and/ or sufficient development of the backstory that later becomes an important confrontation with the characters. But since it was released by Miramax I wonder if there was a more “complete” version of the movie that once existed.  Because before Harvey Weinstein was known by other names he was called “Edward Scissorhands” for his tendency to cut films to ribbons and this movie’s pacing has earmarks of such meddling.  But then on the plus side, Outside Providence does have Alec Baldwin turning in one of his best performances and an early example of his second career phase doing more comedic and character parts.  Baldwin plays the salty lower middle class Dad who gives sage love advice like: “Sex is like Chinese food.  It’s not over until you both get your cookies”.  Which I’m both ashamed and proud to admit is one of the best nuggets of advice that I have received in my life.  And there are plenty of other great scenes/ moments and a sweetly heartfelt treatment of its characters that ultimately redeems whatever narrative shortcomings there may be.  Outside Providence is one of those underrated films that’s a shame more people aren’t aware of. I say it’s worth the rental if you’re ever inclined.

As always, thanks for reading.  Next time we’re giving Being John Malkovich and Bringing Out the Dead a spin.  Join us, won’t you?