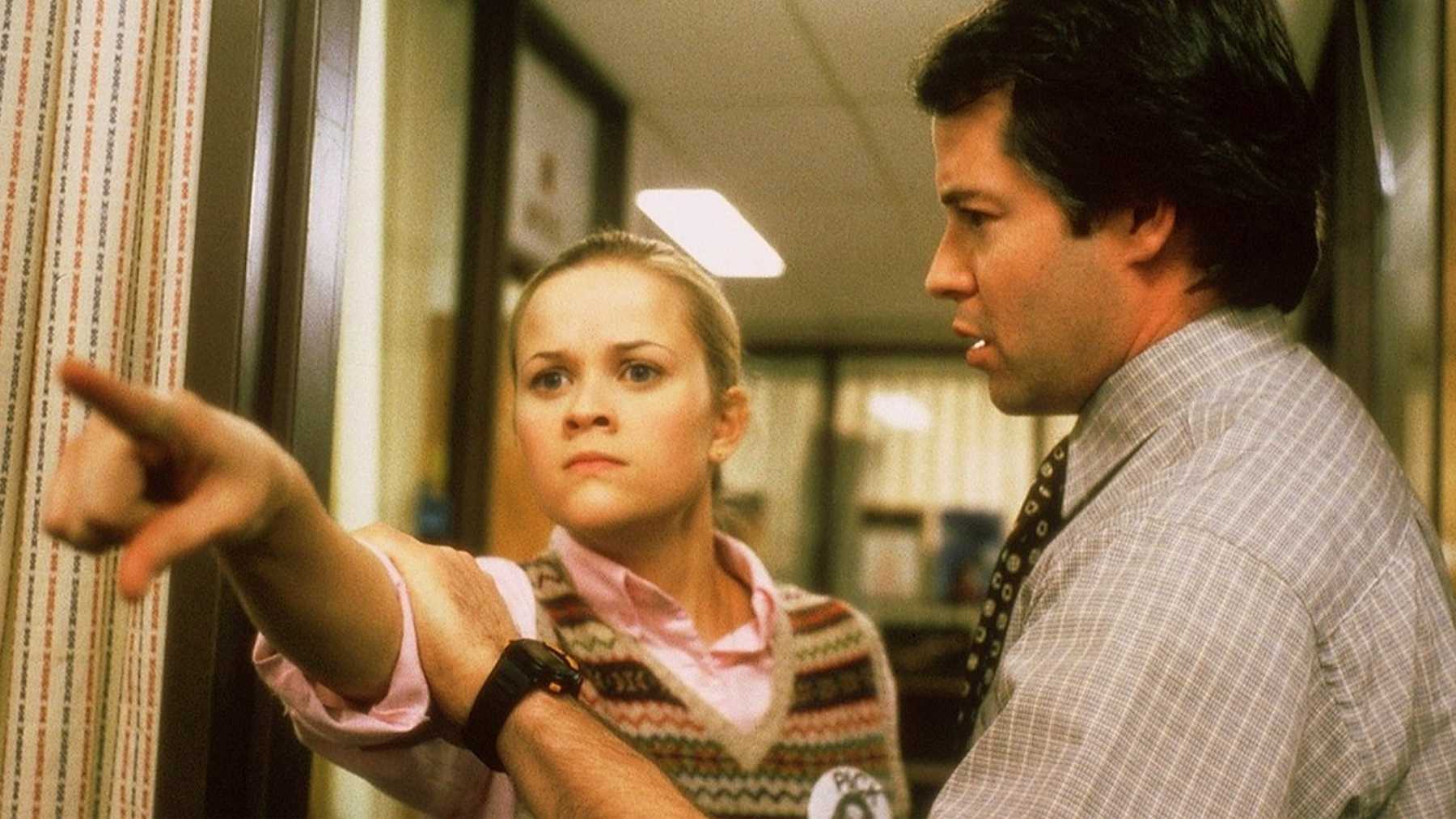 Spoiler: this movie is really good.

By and large- people suck.

At least that was my takeaway after revisiting Alexander Payne’s Election. Adapted from a novel which was originally conceived as a satire of the ’92 presidential election between George Bush Sr. and Bill Clinton- with a third party “disruption candidate” in the form of Ross Perot that came in and “shook things up”.  It was a critical darling upon its release in April ’99- though not exactly a theatrical hit- but I imagine it has done “just fine” over the years with rentals and cable play.  It’s the type of exemplary film from the “best year in movies” where today it’s hard to imagine a studio bankrolling a “dark comedy with no heroes”.  Even in ’99 its a bit of a surprise, I surmise something this subversive probably made it through “under the radar” due to the late 90s “teen-sploitation” boom (post Clueless and Scream.)  So yes, if you’ve been “playing along at home” this is yet another “high school movie from ’99”.  In just the first four months of ’99 we have had at least one major “high school film” released seemingly every week.  The “Reviewing Movies Like it’s 1999” column kicked off with Rushmore, then there was Varsity Blues, She’s All That, Jawbreaker, 10 Things I Hate About You, Cruel Intentions, Never Been Kissed, now Election… and we still have the likes of American Pie and Virgin Suicides to get to.

But Election stands apart from this crowded field by exploring some deeper themes in brilliantly nuanced ways. As mentioned, it’s ostensibly a political satire that has gone on to serve as a surrogate for seemingly every subsequent American presidential election since its release and inspired many a “think piece” (including this one).  Reese Witherspoon‘s breakthrough role of Tracy Flick has become a shorthand to describe every powerful/ ambitious/ qualified woman who has sought higher office but is “not very likeable” (usually Hillary Clinton but pretty much any female candidate). The “Yeah, but is she likeable enough?” sentiment is something our culture has only begun to uproot from the deeply ingrained misogyny. And the other “candidates” in the film have come to represent other real world political figures.  Chris Klein’s genuinely well meaning, cornfed/ milk toast, Midwestern quarterback gets “selected” to run for High School President against Flick. A nice and popular guy maybe, but also a tool and “not the brightest Crayola in the box”. But because of his good looks/ status and the “who his daddy is” privilege he will be destined to keep “failing upwards” throughout his life.  Klein’s character has come to represent the likes of Bush Jr./ Jeb- Mitt Romney- and every “presumptive nominee” (yes, even the Clinton’s).  And then there’s the Ross Perot analogy in Klein’s lesbian sister, played by Jessica Campbell, who runs on the platform of “who cares and burn the whole thing down”, a “Leto’s Joker of Democracy” I you will. Thus tapping into populace resentment against a democracy that seldom serves them and is seemingly pre ordained for corruptness, or at least “inevitability”.  But ultimately, for the purposes of Election, she isn’t as committed to disrupting the system as she is to getting herself sent to an All Girls Cathlic school and finding a new girlfriend. In the political analogy, this type of candidate has been attributed to both Bernie and Trump in our modern landscape.

But there is one other character in the film- and it is the main one- the teacher “Mr. M”, played by Matthew Broderick.  Going into my rewatch I had the expectations that the film would not age well, especially in terms of the pedophilic sub plot wherein the “villain of the movie” Witherspoon’s Flick is a sexual victim of a predatory teacher. One who Broderick’s Mr. M describes at one point as “a good guy who made some mistakes”.  Mr. M essentially victim blames (and even deep down lusts after this child) and makes efforts to sabotage Flick’s election prospects because he knows she’s “not a good person and should be stopped before she ruins more lives”.  How are audiences supposed to identify with Mr. M a clear monster?  But on the rewatch I realized that it is Mr. M who is ultimately shown as the “nice guy who made some mistakes” (partly because they straight up cast the immensely “likable” Ferris Buhler) but also because he represents America itself with all its deeply rooted misogyny, patriarchy, white male privileged, and manufactured sense of “choice”.  After all, America doesn’t see itself as the bad guy. The film is even more bold because while Flick is in fact a sexual victim who is being held back from “breaking the glass ceiling” by the male patriarchy and everything Mr. M represents, she is also an obnoxious, self absorbed, and downright soulless void who “of course” gets into politics not for any greater desire “to serve the people” but because she feels she is the best and needs to”win”.

So if the characters in Election are supposed to represent the democratic system then by extension are they in fact “us”? Like many things- it’s “funny because it’s true”. We are all the characters in Election in one way or another. We may not intend or desire to be “bad people”. But at the end of the day…  we all kind of suck, don’t we?  That’s kind of a bummer to think about I guess…  the movie’s still funny though.

Since I ran behind on reviews this month I decided to squeeze in one more flick- the April 30th ’99 release Idle Hands.  Yup- yet another “90s high school movie” with a final act at the school dance and a cameo performance from a “popular with the kids” band (Idle Hands has The Offspring, Jawbreaker had The Donnas, She’s All That had Usher DJ’ing, Ozomatli shows up in Never Been Kissed… so, yeah, I don’t think I mentioned this before… but band appearances were a “thing” with these high school flicks). At least Idle Hands is a horror movie, so it doesn’t feel like a total “High School romp” rehash.  I didn’t catch Idle Hands in theaters (and apparently no one else did… it grossed $4 million off a $25 million budget).  But I do remember renting it back in the day, I recall watching and enjoying it. I was probably late returning the tape, paid a fine, and have never felt the need to revisit it since.  But it popped up on my radar again after I released a slasher flick I directed called 4/20 Massacre, which fits into the sub-sub genre of “marijuana themed horror movie” and some reviewers of 4/20 Massacre would name drop Idle Hands as being a prime example of a “stoner horror” film (though there was the occasional Leprechaun in the Hood shout out too).  And, anecdotally, I’ve heard people express a nostalgic type of appreciation for Idle Hands and Scream Factory must have felt there was enough of a demand to release a special edition Blu Ray last year.  So it would seem that Idle Hands has developed something of a cult following.

Now we’ve often pointed out that ’99 is considered the “Best Year in Movies” with some awesome/ interesting projects coming out practically every week.  But very few of these were in the horror genre, which had pretty slim pickings overall in ’99.  The boom of meta-slasher flicks post Scream in ’96 was running out of steam after it’s peak the year before in ’98 (which was comparatively lousy with “teen horror” flicks with releases like Urban Legend, Halloween H20, Bride of Chucky, The Faculty, and …er um…  I Still Know What You Did Last Summer).  We already talked about 99’s “January dumps“, In Dreams and Virus, and to be fair there is the “generation defying” game changer Blair Witch Project (which we’ll talk about in July), plus some glossy creature features like Lake Placid and Deep Blue Sea.  But other than that there’s really just Idle Hands that attempted to deliver some blood splatter to the ’99 film audiences.

Idle Hands stands apart from its other “late 90s” horror brethren because it actually strives for some memorably gory sequences and doesn’t try to pretend it’s an “elevated suspense thriller” or whatever.  It is an over-the-top, tongue-in-cheek horror comedy that takes more than a few cues from Sam Raimi and the Evil Dead films.  In fact, the whole plot of Idle Hands is essentially a riff on the Ash’s “infected hand” sequence from Evil Dead 2.  Many hard core horror fans are dismissive of 90s horror vs. the “golden age” of the 70s/ 80s because of lack of gore/ practical effects, but gore hounds that did check out Idle Hands must have been happy because the film is obviously referential to this era. And I think it is a bit ahead of its time by being a faux Grindhouse flick of the ilk that would gain more traction come the 2000s.  Overall, the movie doesn’t exactly hit its mark- not to name names- but at least one performance weighs the movie down in my opinion.  But instead of dwelling on the negative, I think the lead Devon Sawa should be given some special recognition.  Coming post Casper but pre- Stan and Final Destination, Sawa displays some impressive moments of physical comedy which might not be up to the level of Three Stooges/ Charlie Chaplin “genius” (or at the closer watermark of Bruce Campbell as Ash), but he really seems to throw himself into the role (physically and figuratively). What works in the film outside of some effects and the snappy tone/ humor are his contributions.  But Sawa seems to be glanced over when one thinks of young 90s “it” actors, so I think he’s under-appreciated… Sorry about that Sawa- I think you’re pretty awesome, actually.

And that’s about it for today- next time we’re getting into May and uh…  okay fine- I’ll talk about Phantom Menace.