Reviewing Movies Like it’s 1999: EXISTENZ and NEVER BEEN KISSED 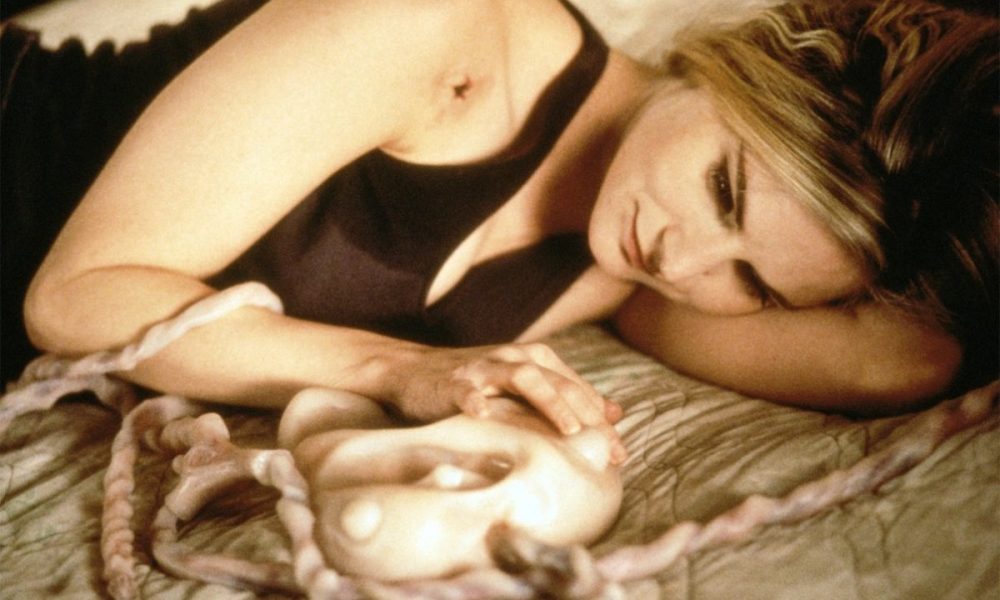 Wow- April has really gotten away from me so I’m admittedly a little behind on my Reviewing Movies Like it’s 1999 articles.  I suddenly became somewhat “busy” for the first time since you-know-when…  I wonder what’s going to happen once we all start returning back “to reality”?

Speaking of perceived reality and mental prisons of our own creation- (makes for a good enough segue into the first movie)- the April 19th ’99 release eXistenZ.  This David Cronenberg directed “mind melt of a film” was sandwiched between the similarly themed The Matrix (and previous Reviewing Movies like it’s 1999 column) and the following month’s Thirteenth Floor (released May 28).  Now it’s been said that popular entertainment (and by extension movies) are a reflective pool of what society is going through in a particular era. So at the turn of the new Millennium, it can be extrapolated through the science fiction genre, that humanity was preoccupied with the concept that we were all living in some “simulated reality” with a “puppet master” that was manipulating and ultimately preventing us from achieving our full potential.  And in a sense, this trio of films were part of a larger wave of Internet/ VR/AI flicks that I am going to call “Computer- sploitation” movies that were peppered throughout the 90s such as The Net, Lawnmower Man, Brainscan, Hackers, Strange Days, Johnny Mnemonic, and Virtuosity.

It would seem that filmmakers were warning us that “computers were taking over our lives” and the line between man and machine was thinning.  Which was theorized to result in a loss of our privacy, free will, personal liberties… and so on and so forth.  Most of these “Computer- sploitation flicks” were kind of laughable (even at the time) and certainly don’t age well- mostly due to the pixelated CGI of the 90s à la The Mind’s Eye. Each attempting to visually depict this thing called “cyberspace” (enter rows and rows of columns with drawers containing information or free floating mathematical equations…E=Mc2) and the ridiculous predictions of what computers could do in the “near future” of which “ordering a pizza on line” aside, mostly failed to materialize.  And the truth is that with any new change in society (whether it be social or technological) there is a “fear of the new” pushback that ultimately boils down to a bunch of hooey.  The fear of new technology was also compounded by the anxieties that come with any major calendar change and irrational “the end is nigh” proclamations.  The whole Y2K panic/ hype was rooted in the fear that computers would somehow shut down by “the date going to 0” and everything would reset and then somehow we’d be in a Mad Max-esque wasteland seemingly overnight.  At least I think that’s what the Y2K scare was about… I could never really follow it.

But you know what?  Now with some perspective, it’s hard to argue that these mostly “silly” 90s sci fi flicks weren’t bringing up some legitimate concerns.  In many ways, internet/ computer technology has indeed changed our lives in profound ways (and not always for the better).  On one hand the World Wide Web has brought immeasurable access to knowledge/ resources that are often a mere google search away, but at what cost? Corporations have now integrated themselves into our everyday lives. Our privacy and liberties have been compromised and we’re all, in one way or another, living “simulated lives” with cultivated avatars as projections of ourselves and social media as a stand in for actual human connection.  There have been numerous times where I’ve been “doom scrolling” or just “buying something on Amazon because…” where I have had a moment of clarity and realized we’ve indeed built our own prisons and have allowed our humanity to be “lost to the machines”.

But I’m not really talking about the movie eXistenZ, am I? Honestly I have tried to watch the film a few times in my life but never end up finishing it even though it seems like the type of bonkers/ heady/ cultish flick that would normally be my jam. This go around was the first time I actually made it through to the end and got to the final “twist”- which I admit helps elevate the overall film.  Cronenberg movies in general are an acquired taste. And true to form, his “body horror” preoccupation (via mutations/ transformations/ diseases) and hyper sexual themes/ metaphors (usually with “gooey bodily orifices” being “penetrated”) are on full display here.  I’ve heard his work described as “Sam Raimi meets David Lynch” which both doesn’t accurately reflect his uniqueness and is also probably the best analogy one can draw.  All of his movies (especially the first half of his career dabbling in the sci fi/ horror genre with the likes of Shivers, Videodrome, Scanners, etc) have a manic creative energy with gross out effects, dark humor, and a “dreamlike/ nightmare” logic and I would venture to say that any project of his is worth a watch.

I think my issue with eXistenZ is with all the unnaturally “flat” lensing/ lighting, “unrealistic” performances, and the lethargic tone/ atmosphere (down to the “low drone” synthetic heavy score) puts me into “sleepy time”.  But now that I’ve finally gotten through the whole thing, I can see that these artistic choices work with the twist ending and I think it might make my next revisit more fulfilling as I pick up on all the subtle clues and character motivations.  I can also appreciate how the movie becomes a “meta narrative” of the creative process and is probably the best “it was all a dream” ending (usually a frowned upon “cheap” storytelling device) that a filmmaker could conceive.   It’s bold, creative, daring, and, at the same time, elusive and not “easily digestible” entertainment.   In other words- it’s very Cronenberg.

Now the question becomes- what worthy film could accompany such a thoughtful and layered cinematic exercise like eXistenZ?   The simple answer is Never Been Kissed… as if there was any doubt.  Released April 9, 1999, this bubble gum comedy was from star and first time producer Drew Barrymore.  It’s interesting that this was her first “at bat” as a producer, she would subsequently bring the more “interesting” Donnie Darko and the glossy Charlie’s Angels blockbusters to fruition.  But Never Been Kissed seemed to firmly cement her “bread and butter” as a movie star, multiplex Rom Coms pairing her with a “popular and likable” male lead.  While beginning as a “child star”( thanks to one of the highest grossing movies of all time E.T.) transitioning to a “bad girl” phase (complete with tabloids/ Playboy spreads and roles in “trashy” late night cable flicks like Guncrazy and Poison Ivy) to landing very meticulous high profile “cameos” (films like Batman Forever and Scream), but it was her turn in Wedding Singer that was her true comeback and set the stage for the next decade as a marquee movie star turning out these aforementioned Rom Coms like Kissed, 50 First Dates, Fever Pitch, Music and Lyrics, etc.

In most of these films, Barrymore plays the “charming, sweet, and quirky” love interest, but Never Been Kissed gives her something of a new angle on the archetype by making her character a complete and utter goofball.  Which now seems perfectly apt when you watch clips from the instantly meme-able cringefest morning talk show that bares her name or any of her social media presence. She may actually be a big ‘ol weirdo and with Never Been Kissed she found a project that was perfectly fitted her personality. But yes, she’s also very charming… as is most of the entire cast.  Which helps one get over the predictable nature of the plot… it’s yet another “high school movie” from ’99, complete with a “third act at the prom dance denouncement” like previous column entries She’s All That and 10 Things I Hate About You.  It’s no Shakespeare- let’s put it that way- as Drew conceals her identity and ends up falling in love with a guy who she wasn’t supposed to/ she can’t reveal who she actually is/ the boy ends up finding out anyway/ so she has to confess to the subterfuge and in the end proclaim her love and… actually this is exactly like Shakespeare now that I think about it.  Go figure.

Bottom line: it’s a perfectly “fine” time waster and generally unoffensive.  Even though its plot has elements of adults lusting after teens- something which I alluded to in my Cruel Intentions write up. Mainstream entertainment in the late 90s/ early 00s was weirdly into exploiting and indulging the concept of “underage teen girls as sexual objects” from music (Spears, Aguilera etc.) to movies where a “flawed protagonist” is pining for a child (not unlike some of the definitive films of ’99 including that year’s Best Picture winner American Beauty and the dark comedy Election.)

Speaking of which- I’ll be aiming to get a review out for Election (released April 23, 1999) before the month is up…  see you then!