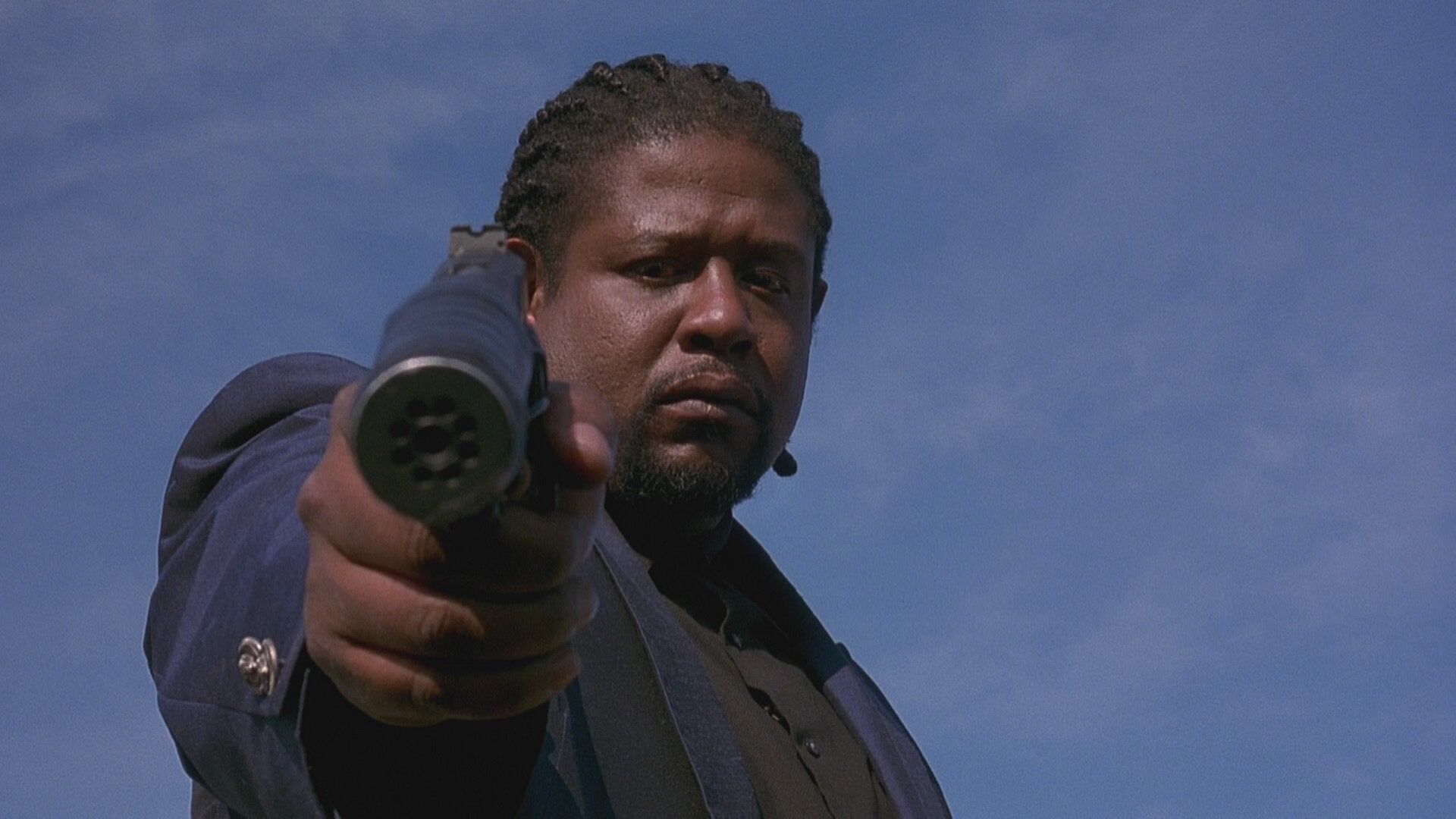 This round we’re talking about two examples of what was going on with the 90s crime genre.

Full disclosure: this Reviewing Movies Like it’s 1999 column is a bit of a cheat because I decided to pair a couple crime thrillers that were technically “released” in ’99 but one could say there’s a bit of an asterix to that statement.  Ghost Dog: Way of the Samurai had numerous festival screenings in ’99 (including Cannes in May) and IMDb has 1999 as the release year, but it technically didn’t come out until March of 2000.  However, Criterion just released the Blu Ray so I couldn’t resist including it as part of the Class of ’99.  And then Lock Stock and Two Smoking Barrels was indeed released stateside on March 5, 1999 but it had premiered in its native England in August of ’98.  But you know whatever- my column- my rules 😉

Ghost Dog Writer/ Director Jim Jarmusch had been a “Sundance/ arthouse darling” throughout the decade by helming some moody/ black and white lensed “hang out” movies like Stranger Than Paradise.  Though his previous film, the Johnny Depp led acid-western Dead Man, did show interest in exploring genres outside of the “low key arthouse drama” terrain.  Even still, the Ghost Dog project turned heads at the time for being an out-of-left-field choice for the filmmaker.  Jarmusch was attempting a “genre mash up” of sorts or, as described in the Criterion release’s liner notes, an “international sampler”.  Jarmusch “sampled” the vibe of the French crime films of Jean-Pierre Melville (most especially the hitman character study Le Samouraï).  And I would say there’s a bit of a French New Wave take on the western crime films like Jean Lu Codard‘s Breathless as well.  These French films from the 60s were themselves deconstructing the American crime genre of the 40s/ 50s. Then with some interpretation of the subsequent “Italian gangster” movies like Godfather/ Goodfellas it makes Ghost Dog something of a “deconstruction of a deconstruction”.

According to the Criterion liner notes, Jarmusch then “mashed” these Euro/ Western crime influences with the milieu of the 70s Blaxploitation film.  Given the ages of the filmmaker and star Forest Whitaker (they probably grew up with these films), this makes sense. But I actually think Ghost Dog more fits into the 90s “hood movie” cycle that more or less began with a duo of ’91 releases, New Jack City and Boyz n the Hood.  I personally like to call them “Hip Hop-sploitation” flicks. Movies that would often fit into the crime/ gangster category and like the music they were often reverential to the blaxploitation forefathers of Super Fly and Shaft.  “Hip-Hop-sploitation” could encompass anything from “hood dramas” like Above the Rim, Poetic Justice,and Menace II Society, to various Ice T/ Cube starring action thrillers like Trespass, Surviving the Game, Ricochet etc, to eventually flat out parodies of the genre itself like High School High and Don’t Be a Menace to South Central While Drinking Your Juice in the Hood.  More often than not, the film’s marketing would spotlight the appearance of some rapper-turned-actor in the cast and have a “mixtape like” soundtrack that would feature the top artists in the field.  With Ghost Dog, Jarmusch seemed to take the hip hop heavy soundtrack concept a step further by recruiting Wu Tang Clan producer RZA to compose the entire score.  I didn’t do much googling on the matter, but from what I can tell it was the first time a rap producer was tapped to score an entire film and it is probably the most iconic and influential aspect of the film.

I’ve watched Ghost Dog a few times over the years and I was happy to scoop up the Blu Ray for posterity.  Ultimately, I appreciate the ethos and concept of what Jarmusch set out to do versus viewing it as a piece of pure entertainment.  The movie on its own merits is pretty weird and might be more “interesting than good”.   The stripped down narrative of a revenge story by way of a meditative contemplation of one’s own existence and purpose, is pretty damn interesting.  Honestly, I’m not sure what it’s saying exactly. Other viewers might pull something more definitive from the various themes the film explores, but from my perspective, Jarmusch is more like a painter throwing his thoughts/ inspirations/ influences on a canvas.  The artist is “baring their soul” as it were in that time and place- then essentially leaving the viewer to make their own interpretations.  But he’s also not the sole voice in the film, Jarmusch seems to leave a lot of room for his performers. Whitaker as the man of few words, “Ghost Dog”, and RZA through his score contribute their own interpretations to the themes/ ideas.  And then Jarmusch “sampled” these not-always-harmonic elements and constructed a “genre picture” that probably only he could have made.

I think Ghost Dog also teaches us filmmakers that one can put “anything you want on the cover” to sell a movie and make it easily categorizable for marketing purposes and that’s fine.  By doing so you can tap into a wider/ more mainstream audience while still “making art”.  We don’t need to “look down” upon any project/ genre or be dismissive of its artistic potential.  We can approach a film with higher aspirations and instill our own unique voice and perspective- making it a piece of “true art”- no matter what has to be done to get it made.  Jarmusch manages to pull this off with Ghost Dog, more so than many filmmaker’ similar attempts, and it’s a fascinating film to study in that regard.

Where Ghost Dog was tackling the “hood movie”/ “Hip-Hop sploitation” spectrum of the crime genre of the 90s-,Lock Stock and Two Smoking Barrels was definitely trying to ride the ultra slick/ cool Quentin Tarantino crime movie wave of that same era.  Following Reservoir Dogs and Pulp Fiction a slew of movies were released that took a page from Tarantino and emulated the tropes of Film Noir and the American gangster films of decades past and “remixed them” with plenty of stylistic flourishes that included non linear narratives, sprawling characters/ situations that turned out to “all be connected”, shocking humor, over the top violence, and an overwhelming sense of “cool” with fashion and curated soundtracks.

These “Tarantino- sploitation” flicks like 2 Days in the Valley/ Things to Do in Denver When You’re Dead/ Blood, Guts, Bullets and Octane/ Boondock Saints et al. are mostly dated and pale imitators of their inspirations, but Lock Stock has managed to be its own unique thing and “stood out from the pack”. Probably because of the whole cockney-flavored atmosphere that the movie just oozes with.  The low down and dirty “streets of London” aspect is all at once alien/ bizarre (especially for American audiences I presume), but so infectious that it makes you want to throw down a pint, chain smoke, and start a fight at a soccer game (excuse me, football match) or something.

To his credit, Director Guy Ritchie quickly developed his own style beyond a mere “British Tarantino” by employing hyper kinetic “music video” camera with editing techniques that are “very 90s/ early 00s”. And while we can definitely call these techniques “dated”, they are done with such earnest energy that it doesn’t “wear out its welcome” like a lot of films that employ variations of the “MTV style”.  You can see Ritchie testing the waters with Lock Stock, which in my opinion would come to more satisfying fruition with his follow up, Snatch, and of course would get more epic with the Robert Downey Jr. led Sherlock Holmes films.  It would seem to me that the cult popularity of Lock Stock in the States, thanks to rentals at Blockbuster/ Hollywood Video where most people probably “discovered” it, helped prime American audiences for the rising popularity of “British television” in subsequent years.  Lock Stock also jump started “second careers” for athletes-turned-actors Jason Statham and Vinnie Jones, who would go on to play tough guys in all manner of “B action” movies until the end of time it seems.  It’s hard to watch Lock Stock now with “fresh eyes” because it represented such a specific moment in time and really spawned the movies where things got interesting.  Which I guess is a long way of saying that Lock Stock is cool- I enjoyed it at the time- and after the rewatch I nodded my head and said “yeah, that was fun”.  Maybe next time I’ll drink a pint.

Join us next time where we check out two 90s teen-sploitation movies released in March of ’99… Cruel Intentions and 10 Things I Hate About You.