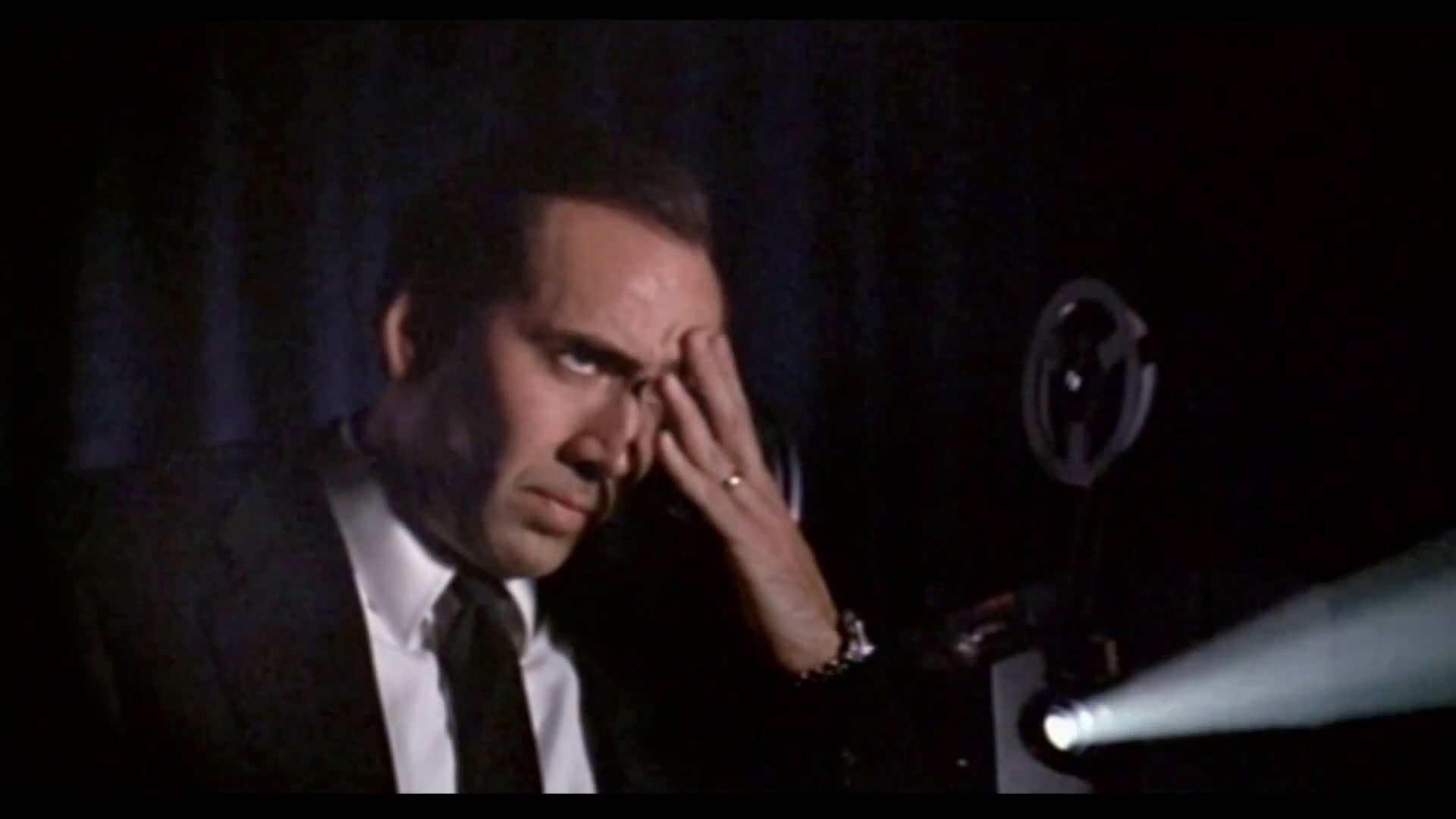 In this column we get “skeezy and sleazy” with a duo of February ’99 releases- Jawbreaker and 8MM.

As I discussed in my review of She’s All That and Varsity Blues, ’99 was something of a peak year both creatively and financially for the nineties teensploitation film cycle which more or less kicked off with the successes of 95’s Clueless and 96’s Scream.  The studios’ subsequent mad scramble to find “the next Clueless or Scream” resulted in the some interesting/ elevated “teen films” being released in ’99, if even by happy accident. Films like 10 Things I Hate About You, Election, and Cruel Intentions. That scramble may also justify the how-the-hell-did-this-thing-get-made Jawbreaker.

Jawbreaker tells the sordid tale of a quartet of sociopathic high school girls who accidentally kill one of their friends by forcing her to deep-throat the titular candy and their subsequent efforts to cover up and benefit from said friend’s death.  Even though these “high schoolers” are played by 20/ 30 something-year-olds, Jawbreaker goes whole hog in its fetishistic sexualization of high schoolers through its wardrobe, dialogue, and set pieces.  Most blaringly, a scene detailing the statutory rape of the films lead Rose McGowen by an unsuspecting creeper, played by her then-boyfriend Marilyn Manson.  According to Wikipedia, a scene that was so graphic in its initial edit that it garnered the film an NC-17 rating…. “All the yikes” is what I have to say to that.

The elevator pitch for Jawbreaker was surely “Clueless meets Heathers” with the script giving knowing “meta nods” to other teen high school movies throughout.  And to the film’s credit, it seems to have informed/ influenced Mean Girls with its dark comedic dismantling of the high school social structure.  And perhaps due to the nostalgic glaze of people who saw the movie at the right time and appreciators of “bad taste cinema”, it has garnered a camp/ cult following.  Personally it took me a while to get into the movie, it had a lot of dated edits and sound effects that can be best described as “90s music video-esque” which I found both distracting and annoying. They also seemed to be abandoned as a storytelling device about halfway through the movie- almost like it was tacked on because some test audiences didn’t realize they were supposed to be watching a comedy.  The broad no-one-is-a-good-person performances and storyline doesn’t do much to ground it or give me something to latch onto.  But admittedly the film did “warm up” as it went along and with its shear devotion to its exploitive “lizard brain” baseline level of entertainment, I couldn’t help but be kind of awed by its existence.  So it’s “bad”- but it reaches levels of “good bad”… individual mileage may vary.

Moving along we have the Neo Noir 8MM, which in retrospect seemed to have been a crystal ball into Nicolas Cage‘s career descent into “meat and potatoes” thrillers with an initial perfunctory theatrical release, leading to an existence on streaming service’s libraries.  But like the best examples of “post bankruptcy” Cage movies, the performer puts in a dedicated and eccentric performance and if the material and filmmakers rise to his level of creative insanity, it produces some memorable films.  And 8MM certainly falls into that camp with Andrew Kevin Walker penning a script that seems to be trying to outdo the unrelenting darkness of his previous serial killer thriller, Se7en. Along with a post Batman & Robin  Joel Schumacher trying to swing the pendulum as far in the other direction of said perceived bomb/ embarrassment as possible.  Thus making 8MM a flick that may not be a “classic” but there’s something about it that will always stick with you after viewing.  Like it is for the characters in the film, the “peek behind the curtain” into a world of human depravity and darkness is tough to shake.

But at the end of the day, the movie is still a pulpy Mystery Thriller with Cage playing a private surveillance expert who is hired by a billionaire widow to uncover the authenticity an 8MM “snuff film” from her late husband’s safe which depicts a young woman being murdered.  He even gets a sidekick to aide him on his journey into the depths of hell- an adult store clerk played by Joaquin Phoenix. Phoenix is not only the best character, but perhaps the “heart” of the film representing another young dreamer whose life gets swallowed whole by the exploitive Hollywood meat grinder.

The first half to two thirds of the film is when it’s most engaging. But as it approaches the third act and the mystery is more or less revealed, it feels almost perfunctory and “rushed”- as if the filmmakers were too scared to go any deeper into the disturbing void and veered away into more comfortable revenge thriller trappings.  Even still, Cage’s gradual build up to a “fire and brimstone” death dealer is always a pleasure to behold.  The film in a lot of ways reminds me of a 70s New Hollywood type thriller, more specifically the films of screenwriter Paul Schrader, with all their conflicted characters and morals.  There’s of course Taxi Driver, but there is also Rolling Thunder and especially Hardcore (where George C Scott tries to save his daughter from the clutches of the Los Angeles porn industry.)  In fact, the scene where Cage first watches the snuff film seems to mirror a similar one from Hardcore.

I guess this makes for a good enough reason to wax philosophical on the career of the late and underrated Joel Schumacher.  After he passed, many lamented that his career would always be overshadowed by the Batman sequels and their divisive reputations.  But his overall career is much more eclectic and interesting than just a pair of idiosyncratic neon-lit superhero flicks.  He helped usher in the whole “brat pack” era with the coming-of-age melodrama St Elmo’s Fire and by utilizing many of the iconic young performers of the 80s in the generation defining thrillers Lost Boys and Flatliners.  Then there was the misunderstood/ misinterpreted and depressingly predictive social drama/ thriller Falling Down.  And in-between the Bat-flicks there were a couple John Grisham popcorn legal thrillers.  And even after some later career stumbles, he still managed to make the high concept and (at the very least memorable) thrillers, 8MM, Phone Booth, and Number 23.  Heck, he even directed one of Cage’s first forays into the direct-to-streaming-thriller world- Trespass.

It seems to me Schumacher was a “journeyman” director (perhaps one of the last of his ilk) with a career that is so nonspecific and, therefore, hard to evaluate alongside other directors of his stature/ era.  His filmography harkens back to the “old studio system” where guys like Howard Hawks were under contact and expected to jump from melodramas to thrillers to comedies and westerns.  And these “journeymen” pulled each of these genres off.  Granted, some movies turned out better than others, but they did the job well and often with flair.  Unfortunately, this means Schumacer’s legacy will always get overlooked in favor of directors that are more easily categorizable or can be attributed to a specific genre and connective theme.  But we should always remind ourselves that Schumacher did some interesting stuff and took some chances while providing us with some solid mainstream entertainment.

That’s it for today- next time I’ll be checking out Ghost Dog: Way of the Samurai– see you then!