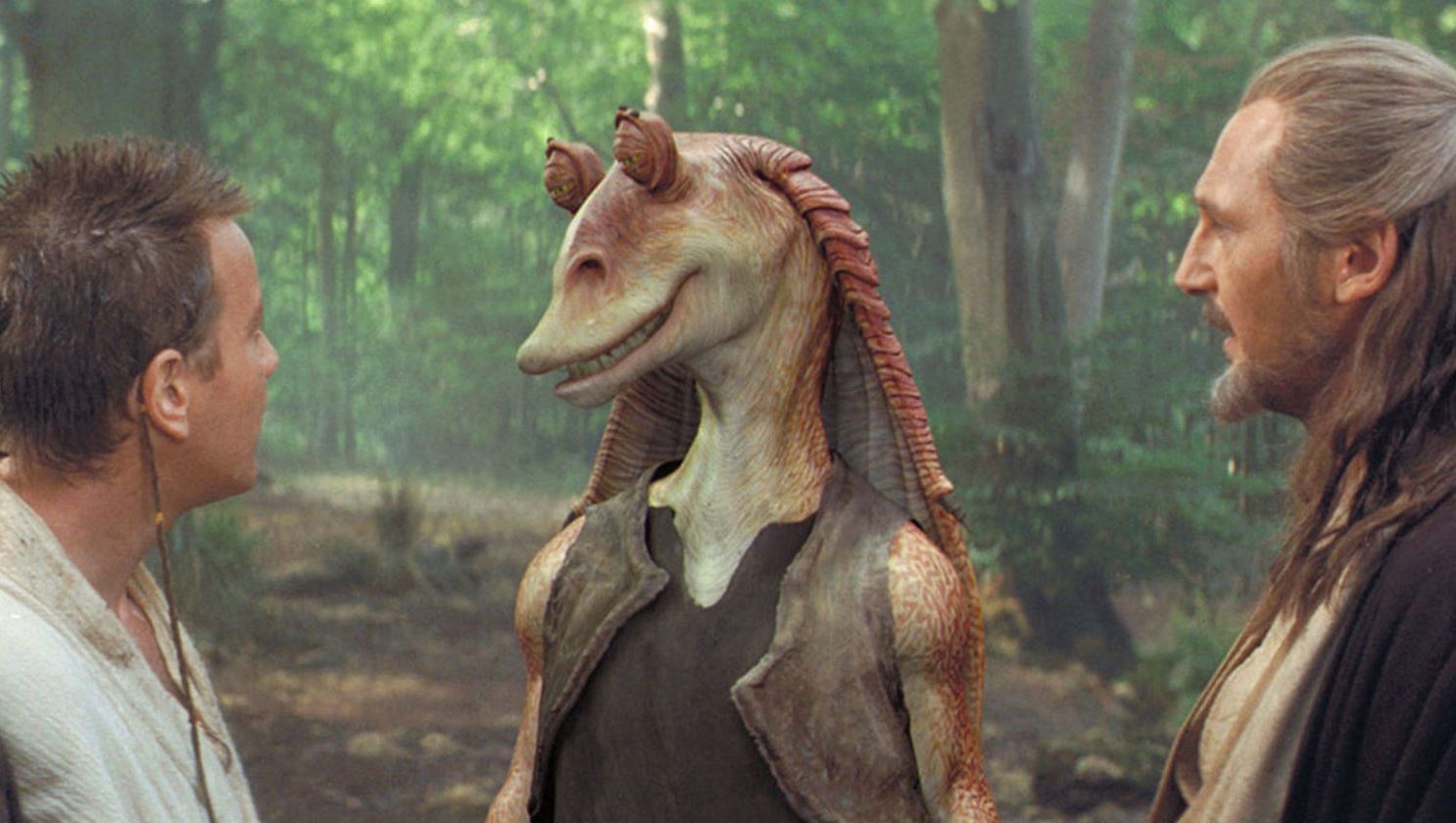 It’s exhausting to be even the most casual of Star Wars fans.  I think a lot of this collective grief can be traced back to the release of The Phantom Menace on May 19, 1999.  Granted, the highly anticipated and “many years later” follow up to the groundbreaking trilogy was almost preordained to be the highest

It’s exhausting to be even the most casual of Star Wars fans.

I think a lot of this collective grief can be traced back to the release of The Phantom Menace on May 19, 1999.  Granted, the highly anticipated and “many years later” follow up to the groundbreaking trilogy was almost preordained to be the highest grossing movie of 1999.  But ask anybody, Phantom Menace did not “win” that year. Even amongst the sci fi genre, The Matrix (which I discussed back in March) out Star Wars’d Star Wars by a parsec.  And even a couple weeks prior The Mummy (released May 4th) a “not great but fun” mishmash of Raiders of the Lost Ark and Army of Darkness, all but ate Phantom Menace’s lunch by offering up more pulpy-Saturday-matinee-throwback-entertainment than the filmmaker who invented the concept.

But at the “pre dawn” of Phantom’s release people were stoked.  After all, we were a bunch of 80s snot-nosed brats who grew up with the generation defining space opera.  It was the “entry drug” for nerds of all stripes.  If memory serves, it was the first trailer I “downloaded” (this was pre streaming/ YouTube days kids).  I recall there were a couple guys at college who were uber Star Wars fans and when they found out about the “Jedi rat tail hair braid” thing they styled their hair to look just like it.  I once read that at least part of the box office receipts from the Brad Pitt starring vehicle Meet Joe Black were “goosed” because the Phantom Menace trailer premiered before it.  People actually bought tickets just to watch the trailer and left when the two minutes were over.

Then the big day arrived and folks had waited in line to get tickets so they could be the first to see the “new” Star Wars movie.  Now today, if someone told you that they camped out all night to buy Phantom Menace tickets the knee jerk response would probably be “Oh God, why?”  Because it was a big deal- that’s why.  This was the most hyped movie since…  probably the last Star Wars movie.  So anyway- the movie came out and even after some tepid critical reviews we all mostly deluded ourselves into thinking that Menace was “you know, pretty good” (don’t lie, I was there).  Or if there were any doubts that creeped in it could be explained away with a “well, Lucas is setting up the groundwork for the new trilogy” yada yada.  But eventually, the backlash came and the hard truth couldn’t be ignored any longer.  The Phantom Menace kind of sucked.  And we’ve all been tearing each other apart trying to “like” Star Wars ever since.

It is without hyperbole that the Phantom Menace ruined people’s lives.  And no- we’re not just talking about fanboys who were let down by their Nerd God’s forehead slapping creative decisions in the prequels or all the original trilogy “improvements”.  Or as a friend once told me, “it feels like George Lucas took a shit in my heart”.  But it was miserable for the people who were actually in the movie.  There was a child actor quit who acting and went through decades of depression and TMZ articles.  The actor who performed the “first fully CGI’d character in a feature film” that later contemplated suicide…  all over a damn movie.  And the one person at who’s feet can be laid the blame for most of the problems with Phantom Menace ended up getting fed up with the whole enterprise and sold what had become his burden to the Big Mouse.  Though I suppose we shouldn’t feel too bad because Lucas got a cool 4 billion out the deal.  But even still, the act of Lucas “selling off his baby” felt like a defeat.  He gave up.  We beat him down.  But hey- we were going to maybe get a “good new” Star Wars movie out of the deal, right?

But even after Disney took over, the discourse just seemed to get worse.  Now The Last Jedi and Rian Johnson and/or Kathleen Kennedy became the thing that “ruined Star Wars”. YouTube created a whole “algorithm ruining” cottage industry of commentators bemoaning on the “downfall of Star Wars” with click bait videos targeting whoever was the hated figure du jour (more often than not a woman).  Russian “troll bots” helped flame the discontent.  The thing that once united us- the love of an adventure “in a galaxy far far away”… was tearing us apart.

Therefore at this point it feels like “punching down” and not very productive to critique the Phantom Menace.  Yes, the movie is “not good” even in the most liberal of perspectives.  Every time there’s a “bright spot” whether it be the pod race or the “duel of the fates”, Lucas manages to undercut everything with a thinly veiled racist caricature (even though they’re “aliens”, but still) or a fart joke featuring an other-worldly camel creature and Jar Jar Binks covering his nose and saying “pew yusa”.  And seriously, why is it necessary for friggin’ Lil Vader to have “built” C-3PO?  What does that add to anything and why in God’s name include it? AHHHHHH!!!!!

Phantom Menace is what I refer to as a “bad sweater movie”.  By all appearances it’s “fine” but as soon as you pull one thread you see another another, then another, then pretty soon all you’re left with is a shitty pile of yarn.  But I also know that making movies is hard.  Which is often the struggle I have with being a “movie reviewer” or whatever.  Once you make a movie it’s difficult to “critique” another directors’ work without feeling like a major tool for doing so.  As a filmmaker, I know what it’s like to have your vision/ intention being compromised.  And no matter how much pre-planning you do, things invariably don’t pan out, and you have to “make it all work” somehow.   And then even after making the movie you have to accept the fact that a lot of folks are just not going to like this thing you spent a year (or more) of your life pouring your soul into.  I feel bad for Lucas.  I feel bad for everyone involved with this movie.

But since the Disney acquisition of the IP there has been a growing appreciation for the Lucas prequels.  Some people will even go to bat for Phantom Menace…  good for them.  And I think the next two installments did get better, give or take some “coarse sand”.  On Disney’s part, the new “Abrams sandwich” trilogy had some highlights (mostly with casting), but was thematically disjointed and not without its own “prequel-level” problems.  And actually for my money Rogue One and Solo are some of the best Star Wars movies since at least the original trilogy, despite whatever production rejiggering and headaches they went through.  And I think there was a consensus, for once, that The Mandalorian…  was pretty good.

Therefore there might be, dare I say “hope” with “liking” Star Wars again.  Especially with Disney cranking out more of these movies/ D+ series/ cartoons/ et al.  In the process of “milking the cow”, Star Wars is becoming less “precious”.  And I think that’s a good thing because soon there will be enough stories and options to keep any jerk happy.  I also like that by further exploring this “wretched hive of scum and villainy” all these projects are basically becoming well-produced “on brand” versions of the wave of Star Wars knock offs in the late 70s/ early 80s like Battle Beyond the Stars, Ice Pirates, Prisoners of the Lost Universe, Space Mutiny, or even the made-for-TV Ewok movies.  And I’m all here for the “weird space shit” meets the “fill-in-the-blank sub-genre”.  So, uh hem, I might be starting to like Star Wars again… which would be nice.

I also took time to check out Notting Hill (released May 13, 1999).  Now it probably comes as little surprise that Rom Com’s aren’t really my jam.  But part of the promise I made to myself with this Reviewing Movies Like it’s 1999 project was to be open to giving certain movies a spin that I wouldn’t normally deem worthy of my eyeballs.  And given that, Notting Hill is both the 7th highest grossing movie of ’99 and still (!) the highest grossing British produced film ever made. It was only proper that I included it as part of the column.

I think part of Notting Hill’s “secret sauce” for success was that it made for effective counter programming against Phantom Menace, which ran roughshod throughout the rest of the month, leaving Notting Hill as the sole “nice movie” that dates/ grandmas, etc, could watch while the bass rumbles of lightsaber battles echoed in the auditorium next door.  But, of course, the true secret weapon in Notting Hill’s corner was having the one person that could stand toe-to-toe with millions of dollars of CGI, the biggest movie star of the year, Julia Roberts.  ’99 was the year that truly cemented her as one of the most bankable movie stars because she had this and another Rom Com in the domestic Top 10, Runaway Bride, which reunited her with the co-star of her breakthrough film and for all intents and purposes was Pretty Woman part Deux.

At any rate, Notting Hill itself is “cute, fluffy, and charming” and therefore satisfies everything one could want from a mainstream Rom Com.  It definitely leans into the personalities of its marquee movie stars and the rest of the “cast of quirky characters” is uniformly solid, surely helped by the fact that the Brit’s “train their actors”.  I could also appreciate how Notting Hill is something of an inversion of the atypical Prince Charming/ Cinderella storyline.  Even today this movie would normally be more traditional with a male movie star sweeping a “regular small town girl off her feet”.  Instead with Notting Hill it’s a “regular joe” played by Hugh Grant who is wooed and “plucked out of normalcy/ complacency” by a “rich, beautiful, and seemingly unattainable” Prince Charming in the form of Julia Roberts.  And the movie does little to hide that Roberts is playing a thinly veiled version of herself… at least the public perception of “her”.  Which gives the film an interesting layer of meta commentary, that never digs too deep, but touches upon the public’s “ownership” of celebrities.  The fact that these people “belong to us” means we can tear them down and enjoy their misery, but Notting Hill seems to be trying to remind us that these are indeed human beings that we suck the life blood from. Each of us just “want to be loved” and allowed to live our lives.  It’s a universal truth that we often forget to keep in perspective when it comes to the treatment of our “celebrities”.

That’s it for today, for the next article I’m planning on doing a round up “Cannes style”.  The ’99 edition of the film festival ran from May 12- May 23 and two of the films screened were Virgin Suicides and The Limey…  so I’m going to watch and talk about them- see you then!