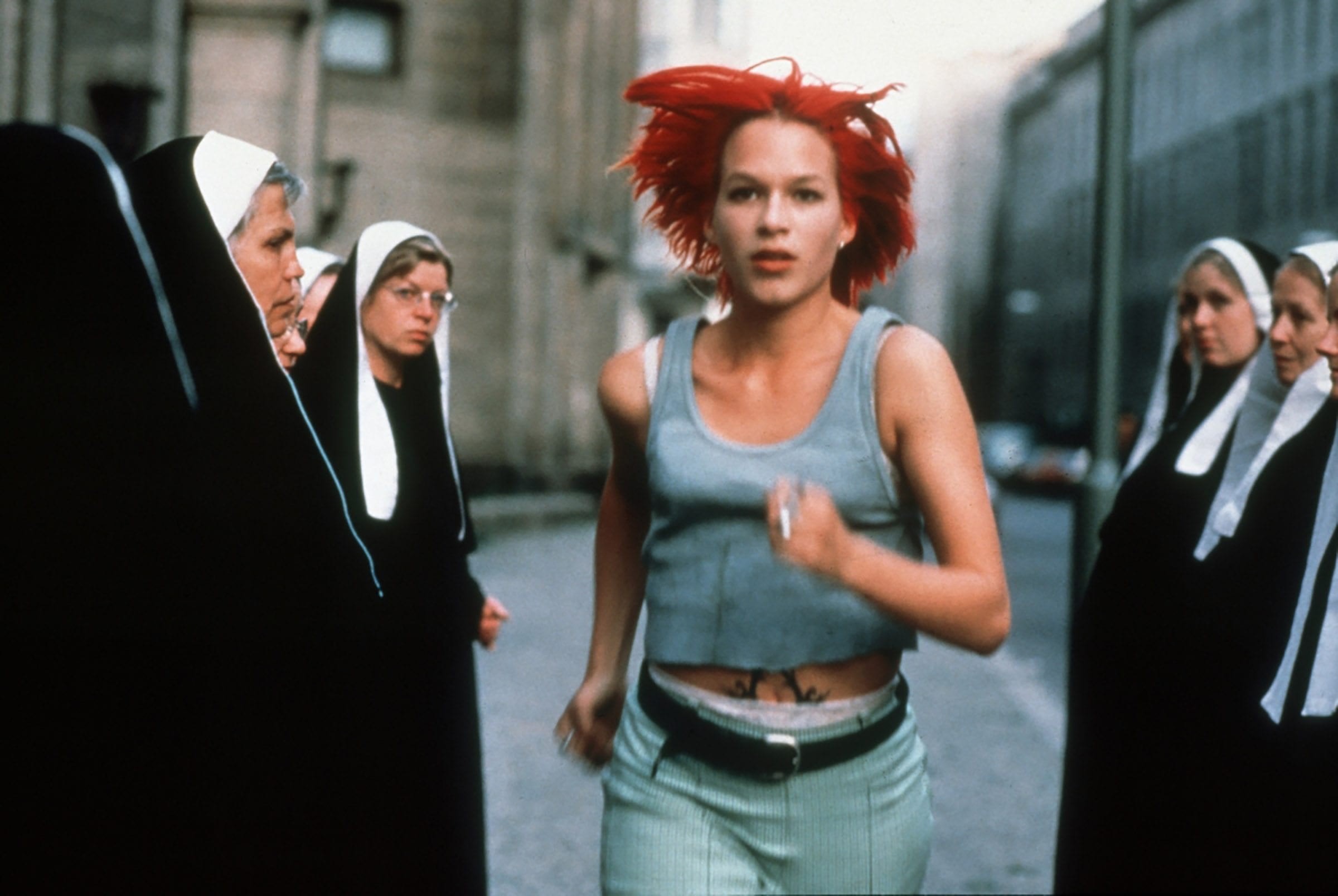 Welcome to another Reviewing Movies Like it 1999 where today we’re chatting about the stylistically hyperkinetic Run Lola Run (released in the U.S. on June 18th ’99) and the train-wreck summer blockbuster Wild Wild West (released June 30th). So let’s get to it… Every so often a movie comes along with a high concept that can be

Welcome to another Reviewing Movies Like it 1999 where today we’re chatting about the stylistically hyperkinetic Run Lola Run (released in the U.S. on June 18th ’99) and the train-wreck summer blockbuster Wild Wild West (released June 30th). So let’s get to it…

Every so often a movie comes along with a high concept that can be quickly summarized in little more than two sentences.  It becomes a sizable hit, then producers/ studios latch onto the concept as a winning formula, and it spawns its own sub genre.  Die Hard is probably the most easily identifiable movie that has achieved this immediate influence.  After the release of that 80s action classic, there came a slew of “elevator pitches” throughout the greater 80s and 90s with twists on the concept.  The shorthand became “Die Hard on a…”.  Whether it be “Die Hard on a plane” (Passenger 57, Executive Decision), “on a boat” (Under Siege), “on a bus” (Speed), or even “at a boarding school” (Toy Soldiers), “at a beauty pageant” (No Contest), “at a hockey stadium during the Stanley Cup” (Sudden Death), “in Beverly Hills” (Taking of Beverly Hills), “in the White House” (White House Down, Olympus Has Fallen)…  Trust me- I could go on all day.

But there’s another film that has become part of this “one movie that sparks its own sub genre” phenomenon- and it has proven to be much more versatile in its application- which is Groundhog Day.  The 1993 comedy where Bill Murray is “reliving the same day over and over until he changes something” has been an especially popular concept in the ’10s as evidenced by action flicks (Boss Level), sci fi (Source Code, Edge of Tomorrow), and even meta- slashers (Happy Death Day).  But it seems that Run Lola Run was one of the first (and under-sung) purveyors of this “Groundhog Day… but with a twist” sub genre. And I think the popularity of the “time loop plot device in movies” has probably a lot to do with the ubiquity of “video gaming” as a form of art and storytelling.

In Run Lola Run, the titular protagonist played by Franka Potente literally has “three lives” to get enough money together and save her loser boyfriend from getting killed by some gangsters. Clearly the narrative is inspired by video game storytelling- which is different from a typical “three act structure” of most films because instead of “progressing the narrative”, the goal is to keep restarting a task until you succeed.  Therefore in application to filmmaking the tension/ suspense and character growth comes from the external goal of “beating the level”. From my vantage, Run Lola Run was the first movie to embrace video games as a form of storytelling.

Run Lola Run also uses a lot of the “MTV” music video and commercial style of filmmaking techniques applied to (at the time) “fresh” post-Tarantino “non linear arthouse crime flick”.  In other words, director Tom Tykwer seems to be throwing every modern pop culture influence (of the 90s) into a blender and utilizes film- video- stills- animation- and techno music to tell the first modern “video game movie”.  Two decades plus forward these stylistic elements immediately date the film in its time and place (not always in a positive light.)  To me, the techno soundtrack is kind of grating and I actually owned the CD back in the day…  or maybe I’m just an old man now.

Anyway, if ’99 is the “beginning of the modern era of filmmaking” then without a doubt The Matrix (which I wrote about in March) foretold what modern blockbusters would look like.  The only other film that was as predictive from that year was Run Lola Run.  Which is probably why Tykwer and the Wachowski’s would later collaborate on the “swinging for the fences” Cloud Atlas.  And even though Run Lola Run feels dated I think its influence on movies with “narratives inspired by video games” is pretty evident when you consider flicks like The Raid, John Wick, Scott Pilgrim, Crank, Dredd, etc.

Now where Run Lola Run felt unique and groundbreaking in ’99, Wild Wild West proved to be a relic of its own time and decidedly one of the last whimpers of the “90s summer blockbuster” era- which was a brand of film that more or less kicked off with ’93’s Jurassic Park and is otherwise known as the “CGI Revolution”.  After Spielberg’s dinos “made all the money,” it seemed every year there were these expensive, CGI effects heavy, mostly critically derided, but still hugely successful movies, released in the peak summer timeframe.  Today when folks claim “superhero movie fatigue” or bemoan the latest Fast and Furious flick pleading for more “original” blockbusters, you just need to remind them of some of these big “dumb- and-loud” movies like Independence Day, Twister, Armageddon, Godzilla ’98, and Wild Wild West to make them realize just how good they actually have it.  But perhaps “absence makes the heart grow fonder” because I have been paying nostalgic revisits to a lot of these “90s summer blockbusters” and have been finding them to be almost quaint and charming in their overblown pixelated absurdness.

Now it’s tough to say which was the most maligned tentpole of ’99, (Phantom Menace which I discussed in May certainly developed its strong and fervent backlash over time), but it didn’t take audiences very long to gaze upon Wild Wild West and in the words of Dr. Malcom utter, “That is one big pile of shit”.  Wild Wild West is the poster child for movies that are made with “too many cooks in the kitchen” and for no greater artistic aspiration than to “meet a summer release date.”  These productions end up recruiting an army of screenwriters (half of which go uncredited) only to have a finished product with plot holes and unmotivated character choices galore.  And like many bad “blockbuster movies,” the stories of the productions end up becoming more entertaining than the movies themselves with the clashing egos of its stars/ directors/ and producers threatening to derail the whole affair and rather than anyone actually standing back to figure out an overall strategy/ goal they just keep “throwing money at the problems”.

Now to be fair, this “filmmaking by committee” approach by the studios has produced decent films and even some outright classics, but when the system doesn’t work then the inherent problems with the script/ production become all the more glaring and one is left wondering what the hell anyone was thinking.  In this particular case, they were trying to replicate the success of Men in Black with the same director (Barry Sonnenfeld) and star (Will Smith)- both of whom were at their peak powers going into Wild Wild West- so you can’t really blame anybody for putting “the cart was put before the horse” in this case.

But unlike many of today’s “generic” blockbusters, Wild Wild West is never really boring and reaches degrees of an “interesting” bad movie, at times.  By all accounts,this was due to the “coked out” fever dream peculiarities of hairdresser-turned-mega producer, Jon Peters.  Among the more famous anecdotes, is the one that Peters was trying to get a “giant mechanical spider” into the never-made and “WTF/ what if?” Superman Lives movie ( which would have been written by Kevin Smith, directed by Tim Burton, and starred Nicolas Cage).  Also, Neil Gaiman claims that Peters was trying to shoehorn the robo-spider into The Sandman movie which (thankfully) never materialized.  But, in Wild Wild West, Peters finally achieved his dream of having a giant mechanical spider wreck havoc in the third act of a movie despite any internal logic or narrative coherence…  And I sincerely hope it made the man happy.  Also according to numerous accounts, the weird tone of the film (gross, perverse, and very horny “humor”) was also largely attributed to Peters’ script notes and “inspirations.”

On the plus side, the sets, costumes, and “sci fi meets James Bond” gadgets are all fun and very stylistic (did this movie inspire the steampunk culture of the later ’00s btw?) and Kenneth Branagh as the “scenery chewing fascist villain” is a hoot and I laughed every second he was on screen.  Others have made comparisons of this film to Django Unchained with some of its characterizations and “revisionist history” of slavery/ Civil War plot.  And just for the hell of it, I decided to pair them as a double feature- which kind of works- even though one is obviously the superior film (take a guess which).  But, it would have been interesting if Will Smith had starred in Django as originally planned because then it would have been the world’s greatest prequel/ backstory to Smith’s character in Wild Wild West.  Speaking of regretful career choices… the other famous factoid of Wild Wild West is that Smith turned down the role of Neo in the Matrix to do this film instead… whoops.

I’m kind of going off on a tangent here, but besides ushering in the end of the “90s summer blockbuster,” Wild Wild West might have been the last hurrah for “end credit rap song that explains the plot of the movie you just saw”.  Which was a hilarious trend in the 80s/ 90s as evidenced in films like The Monster Squad, the first Ninja Turtles movie, and even friggin’ Maniac Cop 2.  It’s apex was probably Smith’s own “Men in Black (Nod Your Head)“.  But then after the Wild Wild West jam became a “punching bag shorthand” for the movie’s greater failings, the “end title rap song” seemed to fall out of favor and the idea of such a thing became pretty cheesy.  (Although, the recent flick Spiral, had a throwback to the whole “tie in rap song” era- which brought a smile to my face).

So is Wild Wild West actually a “bad” movie?  Um yeah…  of course it is.  But like I said, now that some time has passed I can appreciate it’s completely bonkers proceedings.  And these days with studios not hiding the fact that they use extensive reshoots to “fix” a movie, it’s hard to believe a Marvel/Star Wars/etc. film to not have its weirdo edges shaved off at some point during the process.  As a result, these huge blockbusters of today (some Zack Snyder/ DC shitshows aside) are “generic” and become a more of a finely tuned product.  These days when one gazes upon Wild Wild West one can indeed see “a big pile of shit”.  But they sure don’t make ’em like that anymore- you got to give it that.

Thanks for reading.  I haven’t quite decided what to do next but instead of some more June ’99 movies I might jump ahead into July because that month is absolutely stacked.