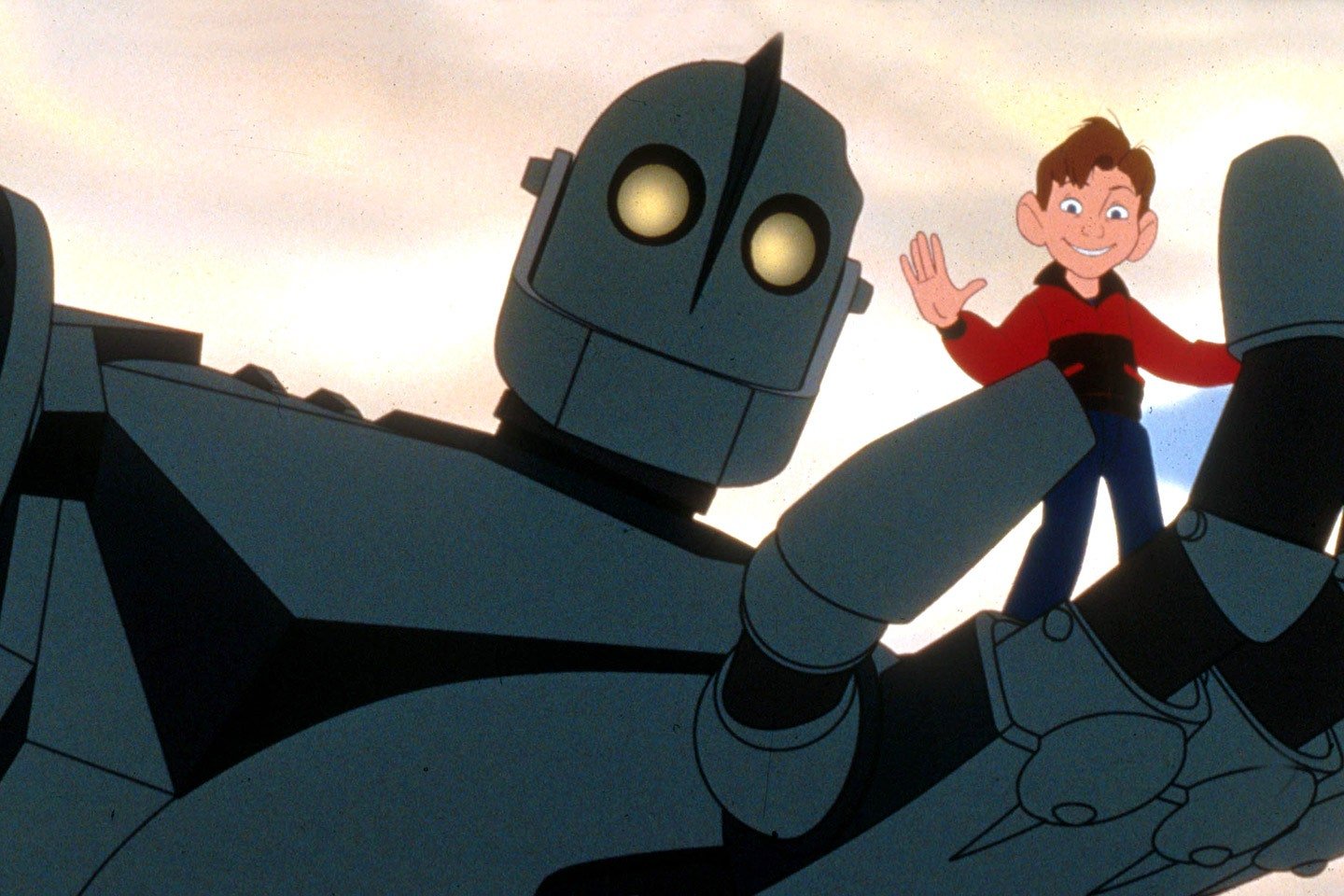 For this Reviewing Movies Like It’s 1999 article I paired a couple of movies rooted in comic book/ superhero storytelling and a Rom Com that I promised my wife we would check out… I decided to watch The Iron Giant (released August 6, 1999) with my two year old kid.  Usually (and depressingly) he isn’t

I decided to watch The Iron Giant (released August 6, 1999) with my two year old kid.  Usually (and depressingly) he isn’t into the “old hand drawn type cartoons” of my youth and appears to get more invested in the new/ CGI/ Pixar type animation.  But he seemed to get into the Iron Giant and watched the whole thing from beginning to end and didn’t wave “bye bye” once (which is about as high a praise as he can give for something on TV).

From my perspective as a 41 year old kid, the Iron Giant script is “tight like a tiger” and is a pretty decent riff on the E.T. “boy befriends an alien” coming-of-age kids adventure by way of 50s sci- fi/ monster movie nostalgia with the homaging of Golden Age superhero comic book tropes. In fact, for a genre that was severely “not in favor” throughout the 90s (save for some Batman sequels) The Iron Giant is by default the best “comic book movie” of 1999 and arguably the decade. But like many “animated movies not not made by Disney in the 90s” Iron Giant stumbled on its release despite being genuinely adored by critics.  I recall it appearing on many Top 10’s of the year, which is saying something when you consider all the other “critic friendly fodder” that came out in ’99.

But an interesting thing happened to Iron Giant on its journey from its ill fated release. Its legacy has seemingly risen over the last few years, thus proving the film to be something of a modern cult classic.  First thing that stands out is that the Iron Giant enjoyed extended cameos in the “Intellectual Property orgies” Ready Player One and Space Jam 2.   The movie was even prominently featured in an episode of Ted Lasso, the current streaming show that has reached the “water cooler cultural zeitgeist”.  And though Iron Giant didn’t perform well on release, “game recognize game” because writer/ director Brad Bird was quickly recruited by Pixar/ Disney and worked on many of the studios’ biggest productions.  And as a director Bird was even able to take another swing at his own brand of “superhero family comedy deconstruction” with The Incredibles.  And possibly most impressively, Bird made the jump from animation to live action (with Tom Cruise doing most of the physical jumping of course) and breathed a second life into the Mission Impossible franchise with Ghost Protocol.

So bottom line, Iron Giant is a darn good movie and hits many of my sensibilities and interests.  And like I said, the script is as solid as you can get and I think Warner Bros’ could easily flip this into a “live action remake” like Disney has done with Aladdin, Jungle Book, etc.

Mystery Men (also released August 6, 1999) is one hot mess of a movie.  Which is fitting because it’s a comic book movie that came out during an awkward time for the genre.  It’s a parody of superhero movies released just a couple years after the practically already a parody of itself, Batman & Robin, and a year before the first successful “modern superhero movie that actually took the source material seriously”, X- Men. And then of course today the genre has become the dominating force in studio filmmaking.  But in the middle of all that “fall and rise” is Mystery Men, who didn’t even appear in their own comic book series (they were just some characters featured in Flaming Carrot Comics).

The publisher Dark Horse Entertainment (who I talked about back in January with one of their other adapted properties the “Aliens meets Terminator on the high seas”, Virus) was successfully navigating the Hollywood landscape before Marvel (or even DC) had really gotten their shit together.  They made movies like The Mask, Timecop, Dr. Giggles, and Barb Wire. Not all of these efforts worked out, but the point is that they were getting their properties produced at a time when Hollywood wasn’t just making “any” comic book into a movie.  And for the most part, Dark Horse did this by not making typical superhero/ comic book films.  These were more star driven, high concept vehicles. Which is why it’s notable that Mystery Men didn’t do particularly well for them because it is the most “comic booky” of the films they produced during the “comic book movie dark ages” (i.e. the 90s).

Mystery Men’s longest lasting- I guess you would call it- “legacy” was introducing the “montage song d’jeur” All Star by Smash Mouth. That particular “needle drop” would go on to be featured in other movies like Shrek and innumerable commercials and TV shows to the point where its use has become a parody of the 90s era montage. Beyond that, the parody/ meta aspects of Mystery Men have probably aged the best now that we’ve seen all manner of comic books faithfully adapted to the screen.  And combined with the low brow/ immature humor the movie seems to be predictive of James Gunn‘s Guardians of the Galaxy and The Suicide Squad.  And even though the whole cast is game and features quite a roster of weirdos and character actors; from Ben Stiller, Janeane Garofalo, William H Macy, Paul Reubens, Geoffrey Rush, friggin’ Tom Waits, and Eddie Izzard… and that’s not even counting the head scratching cameos from the likes of Michael Bay (yes, as in that Michael Bay), the southern rap group Goodie Mob, and even a pre-fame Dane Cook.  I mean, you would think with all this craziness would make for a fun time, but clocking it at almost two hours Mystery Men starts to wear thin somewhere around an hour in.  But it’s definitely a weird little “time capsule” of a movie and can be appreciated for its “ill advised 90s comic book movie” flaws.  Which is a type of nostalgic entertainment I fully support, but for that sort of thing I would rather watch Tank Girl.

Now I was more than content to skip over Runaway Bride (released July 30) because I had already talked about Julia Roberts‘ other big hit of the year, Notting Hill, back in May where it was successfully counter programmed against Phantom Menace.  But my wife reminded me that I promised we would watch Runaway Bride this year so… here we are.  And credit where credit is due, it was the 9th highest grossing film of the year (with Notting Hill not too far behind at the number 11 position).  So if there was a formula for success during this time it was the star power of Roberts + a “frothy 90s rom com” equals a license to print money.  Further adding to its winning formula is that Bride was something of a “Pretty Woman part Deux” by reuniting her with the same director (Garry Marshall) and romantic love interest (Richard Gere) of her breakout role.  Therefore by mostly coasting on the good will and charms of its movie stars and a solid execution of the “will they or won’t they?” plot dynamics you have an all around entertaining and diverting couple hours.  Maybe not exactly my “go to” viewing choice but I wasn’t hating life while watching it either.

That wraps it up for this month. First up in September we’re getting into a couple of the big ’99 releases (and perhaps the most retroactively controversial) Three Kings and American Beauty…. stay tuned.