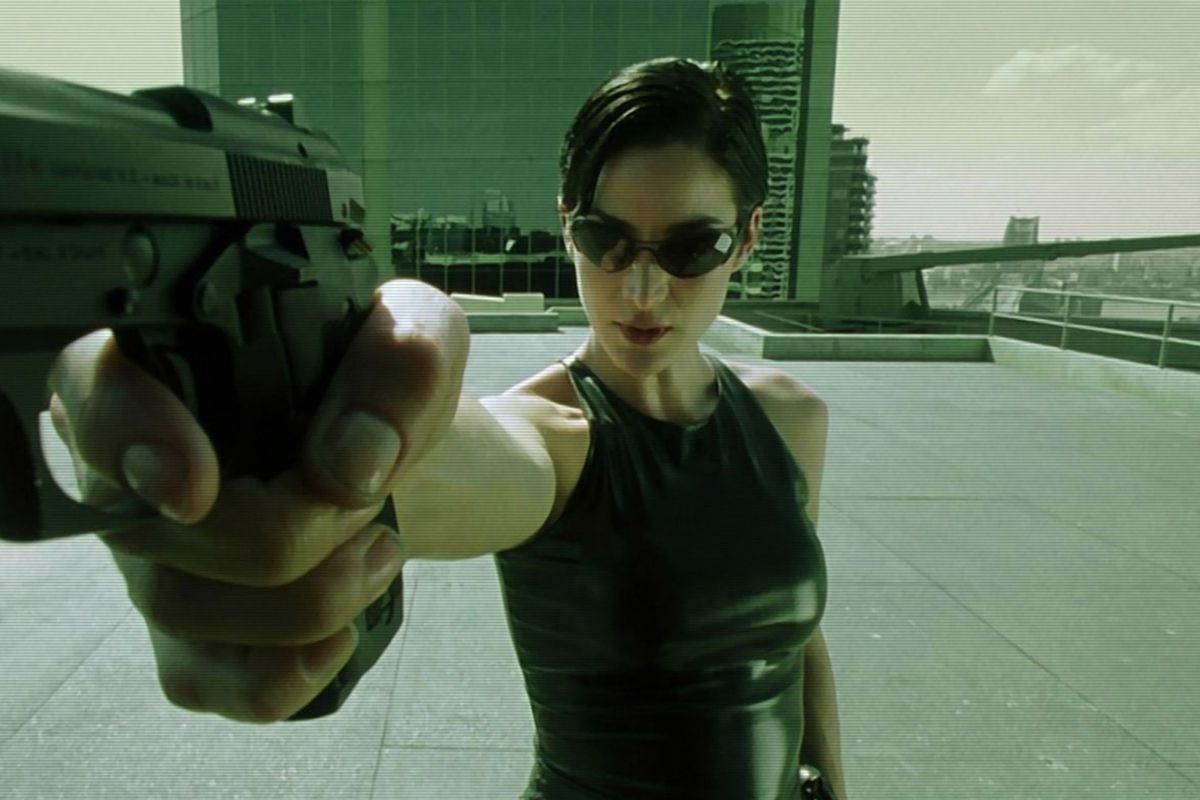 There’s nothing original about The Matrix.

Well, let me explain…  The Matrix stands atop the “all timer” Mount Rushmore of Action Blockbusters that were not only successful upon their release (“movies that practically everyone saw”) but then they made such a profound and long lasting impact on film making and our collective culture that they exist in a realm beyond being merely a “pretty good action flick”.  And if we’re talking about these “best of the best” action movies that occupy space on this list, one could argue that films like Jaws, The Terminator, Raiders of the Lost Ark, or Die Hard are “better films”, but none of them have really reached the ubiquitous immersion into our everyday vernacular (“glitch in the matrix”, “the red or blue pill”, etc) the way that Matrix has.

The most recent groundbreaking and “historically/ culturally significant” blockbusters that even come close are maybe The Dark Knight or The Avengers, but probably the only direct comparison that can be made is to the first Star Wars film.  Lucas’ groundbreaking sci fi opus is also “not original” in the sense that it mashes together American pulp/ space adventure cliffhanger serials like Buck Rogers/ Flash Gordon with Japanese samurai films- most especially Akira Kurosawa‘s The Hidden Fortress all the while using the overall plot structure/ framework of a classic “Hero’s Journey” interwoven with some myth/ religious parables.  The Wachowski Sisters would take a similar tack with The Matrix and concoct a potpourri of “super nerdy shit” as window dressing to an otherwise fairly straightforward “hero origin story” with a “rescue the captured princess from the castle” third act.

Hong Kong Action Cinema was making plenty of noise throughout the late 80s/ early 90s but it was the Wachowski‘s who brought the groundbreaking “wire fu” style of martial arts to American-multiplex-mall-audiences by straight up importing one of the industry’s top fight choreographers, Yuen Woo Ping.  They further pillaged the Hong Kong Action movie zeitgeist with “heroic bloodshed” stylings as evidenced by the “slow motion” shoot outs.  But the Eastern influences didn’t stop there, the Wachowski‘s liberally sampled the aesthetic of “head-trip-sci-fi-anime” like Ghost in the Shell and Akira.  And more broadly the “cyberpunk science fiction” novels of Philip K. Dick and the “hacker/ cyberspace” ideas of William Gibson.  There were also elements of comic books, especially the “more adult” European variety like 2000 A.D. ( with some folks claiming that the Wachowski‘s all but ripped off Grant Morrison‘s series The Invisibles.)  Even less spoken about, were the “immediate influences” of the era- i.e. the “goth horror comic book” flicks like ’94s The Crow and ’98s Blade.  Even the previous years Dark City, seemed to be a “primer” for the head trip that Matrix had to offer.  And then there’s other sci-fi/ fantasy influences with Neo/ Morpheus mirroring “the mentor and chosen one” relationship of Luke/ Obi Wan.  Which if you dig deeper, stems from the Merlin/ King Arthur characterization further linking The Matrix to the “myth plot structure” that is universal across all cultures.

That’s why I was frustrated back in the day when people swore The Matrix was one of the most “original pieces of popcorn entertainment ever created”.  I would be like “naw man, they ripped off John Woo and Tsui Hark movies- come on”.  And the whole dystopian backstory of “machines have taken over and now humanity is fighting back” just seemed to be a rift on The Terminator.  But don’t get me wrong- I loved the Matrix- saw it twice in theaters.  But the response from “non cinephiles” always bugged me.

But it obviously didn’t matter what I thought because the “Matrix effect” on mainstream movies was almost immediately felt.  I recall seeing trailers for otherwise disposable studio programmers like Wesley Snipes‘ Art of War (2000) highlighting their Matrix-esque “bullet time” sequences.  Or The Musketeer (2001)- the umpteenth adaptation of the Alexandre Dumas adventure novel- that shoehorned in some timely “wire fu” action sequences (this time Xin-Xin Xiong the choreographer of the Once Upon in China series “got the call from Hollywood”).  Then there were what I like to call “Matrix-sploitation” movies- the first outright rip-off (I think) was Christian Bale‘s Equilibrium (2002).  But usually these “Matrix-sploitation” films were “Trinity fetish” flicks with a “hot chick wearing spandex/leather, strapped with two guns, shooting a bunch of disposable minions” à la the Resident Evil and Underworld franchises.  And I think a line can be drawn directly from the Matrix’s success to the “comic book boom” of the 2000s.

Listing all the movies that the Matrix would inspire is a futile effort.  Suffice it to say, that the Matrix changed everything.  And not just with movies, its influence stretches into our lives with interpretations that run the gamut of Left and Right politics.  I even think the film (along with the X Files) helped make conspiracy theories “mainstream”. Which in retrospect is where its influence may not have been for the best.

At some point, I realized that what made The Matrix “click” in such a palpable and profound way had nothing to do with the sunglasses, trench coats, shoot outs, or even the dime store philosophies.  What made The Matrix one of the most exhilarating pieces of entertainment (to the point where its “not just another movie” but practically a cultural cornerstone) is that it was “everything to everyone” all at once.  It’s core story is deceptively simple and yet has been told countless times across all cultures/ philosophies and time periods.  The story “works” because it speaks to a universal goal that exists within all of us.  We can all be a little better.  We can all be a hero.  We can make the world a better place.  We just need to break free of “the matrix”.   And what’s “the matrix”?  It’s a reality of our own creation.  And we alone have the power to free ourselves from it…  and kung fu is cool.

That does it for March- we’re getting into movies released in April of ’99 next… see you then!