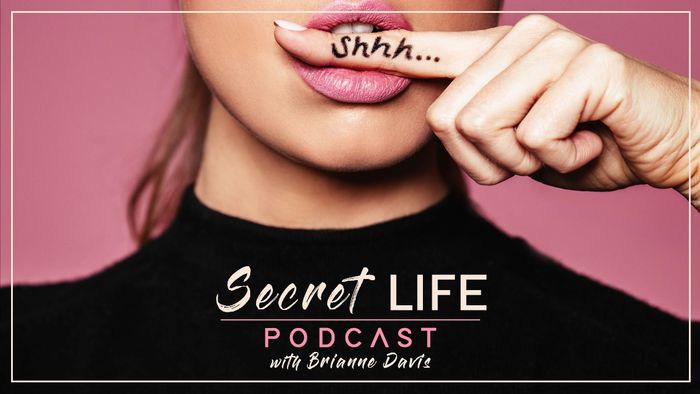 How Did It Start?

Brianne Davis: “Secret Life Podcast was born soon after I published my first article for HuffPost in March 2020. In the article, I shared my secret about being a recovering sex and love addict. It generated over 1.5 million hits in the first month. I received so many DMs and emails thanking me for my honesty and truth and asking for help. A couple of months later, I woke up at 3 am with this thought —“Why don’t I give others a space to share their secrets and release their shame. We can call it Secret Life.” My husband Mark Gantt and I agreed that I should record a few episodes to see if I wanted to do it. And I was immediately hooked. Within six weeks, I had recorded 75 episodes before we even launched in August of last year. Mark edits the episodes, and we produce together. It’s another way for us to be of service. My tagline is—Tell me your secrets, and I’ll tell you mine. It allows me to help others let go of all the pain, trauma, and shame they carry around. In turn, it helps me to stay open and transparent in my journey to stay vulnerable and have humility. I have to tell you there is nothing better than helping someone who’s alone and suffering. When we realize we’re not the only ones going through crap, it reminds us we’re not alone. No matter their status, every human on this earth has problems like low self-esteem, fear of abandonment, or fear of not being loved. We can all open up and heal together.”

What Are Your Favs?

Brianne Davis: “We’ve released over 50 episodes and still have another 80 in the can. The problem is that every single one is special to me because our guests put themselves out there and share their deepest, darkest and hilarious secrets with me. I would say that the first stranger I interviewed was Kristin A. from New York in episode 6. She shared her secret that as she struggled to obtain her image of perfection, she felt she was failing. She decided the only way out was to shoot herself in the chest with a shotgun. It was the first time I realized we were genuinely giving others an outlet to release their stories and last bit of shame. When she described the sensation as her life flashed before her eyes while sitting in her car in a parking garage, I had this overwhelming love for her and anyone who walks through their darkeness to get to the light. It was the moment I knew we could change people’s lives with this podcast. On top of that she trusted me enough to share her truth. It was a heartwarming moment I will never forget. Secret Life has had so many great anonymous guests, like Lisa in episode 8. She used abortions as birth control. Or Ricky in episode 12, who spent time in a psych ward after a cancer diagnosis and built-up resentments. There was Trinity, who had been sexually assaulted by her OBGYN minutes after giving birth. We’ve also been fortunate to have celebrities share their secrets, including Olivia Munn, who shared her living with fibromyalgia. Jana Kramer admitted to having issues with comparing and despairing, and Cheryl Burke revealed that she was a love addict. We recently had former FBI profiler Jim Clemente share that he wore a wire to catch the counselor who molested him as a teenager. I adore this week’s episode (Ep#52), which is a lot lighter and funnier of the secrets so far; Spencer shares his coming out story. He painted this vivid picture of his pornographic magazine collection during the summer of 1979 and how he set up this ultimate fantasy only to go completely haywire in the end! Truly hysterical secret!”

How Did you Grow In This Process?

Brianne Davis: “I think intense therapy and 12-step recovery over the last decade have helped me let go and become the non-judgemental and caring person that I am today. I use to be so selfish and self-seeking, especially as an actress. It used to be all about what I could take from others instead of giving to others. As I walked through the fire of my withdrawal from my addiction to people and attention, I felt freer to be the whole me after a total transformation of my inner world and spirituality. I think my willingness to be seen and exposed after coming out with my own sex and love addiction struggles and the 11 1/2 years of recovery. There is so much shame and stigma attached to being a sex and love addict. I have people every day say that they could tell their truth because they saw I could share mine. That means the world to me because that was the only reason I broke my anonymity: to be of service to a more extensive community, especially our youth struggling to find themselves and make genuine, authentic connections in their lives.”

How does this differ from your book and public speaking?

Brianne Davis: “The podcast is an entirely different medium from writing the book and speaking. In that format, I’m allowing others to reveal secrets and get to the how, what, when, and why of it all. I disclose secrets through my main character Roxanne in my semi-autobiographical memoir/self-help novel, Secret Life of a Hollywood Sex & Love Addict. In it, I dive deep into the mind of a female actress as she tries to surrender to her sex and love addiction in her first year of recovery. It’s about getting into one addict’s mind to explain their actions while also entertaining the reader. My goal was to educate the general public about how deadly the disease of sex and love addiction is while making them feel like watching a tv show or movie. When I am public speaking, I’m honestly up there by myself, emotionally naked, just speaking my truth. The beautiful thing about the Secret Life podcast is that it’s more of a conversation—two human beings sharing their stories and connecting with each other. I absolutely love it, but the best thing about the show is that it’s not about my guests or me; it’s about the listener who doesn’t have a voice. The episodes don’t belong to us anymore; they now belong to the listener.”