Starting Another Draft? 6 BEST Screenwriting Books To Read In 2022 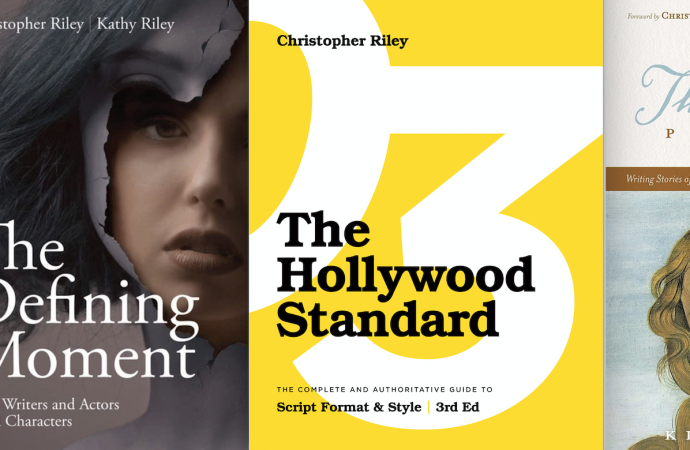 These books will evolve your processes and re-inspire you to dig into your next draft! Or even a whole new story. Don’t take these recommendations lightly, make sure to grow in your continuing education every – single – year.

This book stopped me in my tracks – I set all drafts aside to finish this one. It is a bit of an emotional rollercoaster for the soft-hearted and vulnerable writers. This one will inspire you to re-open and dig deeper with your main characters – I will never write the same way again after this book.

Read more HERE: Your Career Will Be Split Into Before And After You Read “The Defining Moment: How Writers and Actors Build Characters”

The author is informative, the content is easy to grasp, and this book is IMMEDIATELY practical! It’s a standard. #RequiredReading

“I spent 14 years working in the Warner Bros. script processing department, handling all film and television scripts in development and production at the studio. I was an aspiring screenwriter and this was my day job. I started as a proofreader, reading scripts all day, hunting down typos and omissions and putting scripts in the format Warner Bros. likes. I was no great expert and I didn’t know how to spell words like “cemetery” and “hors d’oeuvres” that crop up all the time in scripts. I couldn’t even find “camaraderie” in the dictionary. But I had great colleagues who were true experts and they taught me. I ended up running that department before finally selling a feature screenplay in Europe, finding representation in L.A., and getting my first feature studio writing assignment. My wife, who is my frequent writing partner, landed that job with me. After we’d been writing studio assignments for a while, she suggested that I put down what I’d learned about script format in a guide for the benefit of our fellow screenwriters.” – Christopher Riley

Read more HERE: Yes, You Need One More Draft: A New Edition Of THE HOLLYWOOD STANDARD And A FREE Course To Upgrade Your Current Script

This author is irreverent and pulls-no-punches. There are hard truths in here that you NEED to hear. Your work can only get better when you have a truthful guide instead of unconditionally supportive friends. There are 100 ways to push yourself further, I dare you to try them!

Author of Your Screenplay Sucks! 100 Ways To Make It Great, William M. Akers, a WGA Lifetime Member, has written for studios, independent producers, and network television. He’s had three feature films produced from his screenplays and his novel, Mrs. Ravenbach’s Way, was traditionally published.He taught filmmaking and screenwriting at Vanderbilt University and created Belmont University’s Motion Pictures department, a Variety Top 30 Film School. Akers consults with screenwriting clients around the world. Visit his website at yourscreenplaysucks.com.

Step-by-step guide to demystify and inspire you to get out in the world with a short. This business isn’t linear with one type of writing being more advanced than another, short form is a skill. Everyone will be inspired to make a short with this practical guide. This leans towards the practice and less on the study. For anyone in your life who is ‘starting’ with their first short, get them this book right away!

Kim Adelman is the author of Making It Big in Shorts. She produced 19 short films that won 30+ awards and played over 150 film festivals worldwide, including the Sundance Film Festival four years in a row. Ms. Adelman currently teaches Cinema Production 2 at Mount St. Mary’s University and Low Budget Filmmaking at UCLA Extension, where she was honored as Entertainment Studies Instructor of the Year in 2014 and won the Distinguished Instructor Award in 2016

Read More HERE: “BEST BOOK OF THE WEEK: Making It Big In Shorts “…And How To Benefit From Having Made A Short”

Ya know, I hear a lot about The Hero’s Journey, but it never ceases to amaze me that writers don’t realize that concept is limited through a singular lens. Perhaps a different point of view is in store for writers who’ve had only one kind of writing teacher in their life. Perhaps you’ll shake off a blind spot that is holding you back (and one that 51% of your audience sees clearly).

“Multiple New York Times bestselling author Gail Carriger presents a clear concise analysis of the heroine’s journey, how it differs from the hero’s journey, and how you can use it to improve your writing and your life. In this book you’ll learn:

* How to spot the heroine’s journey in popular books, movies, and the world around you.
* The source myths and basic characters, tropes, and archetypes of this narrative.
* A step-by-step break down of how to successfully write this journey.

What do Agatha Christie, JK Rowling, and Nora Roberts all have in common?
They all write the heroine’s journey. Read this book to learn all about it.“

Never stop studying your craft, studying story, and expanding your writing vocabulary. Critics are reading where writers stop discovering, get ahead of the learning curve and expand your ideas into new landscapes.

“Kim Hudson grew up in the Yukon, a father’s daughter with a Cinderella complex. She spent many years exploring her masculine side as a field geologist and a First Nations’ Land Claims negotiator before studying at Vancouver Film School, University of British Columbia, and the International School of Analytical Psychology Zurich. Kim’s personal journey and scholarly inquiry combined to develop this theory of the Virgin’s archetypal structure. Over the past four years Kim has given workshops and classes in the Vancouver area on the Virgin’s Promise.”

Note Before You Purchase

I often post the Amazon link for ease of investigation, reviews, and general catch-all information. But, I prefer that you order books through your library app or IndieBound.org!

“When you shop at small businesses, you help your community, the environment, and the economy.”