The Best Couple In Modern Studio Cinema And The “Jeans Gaze” 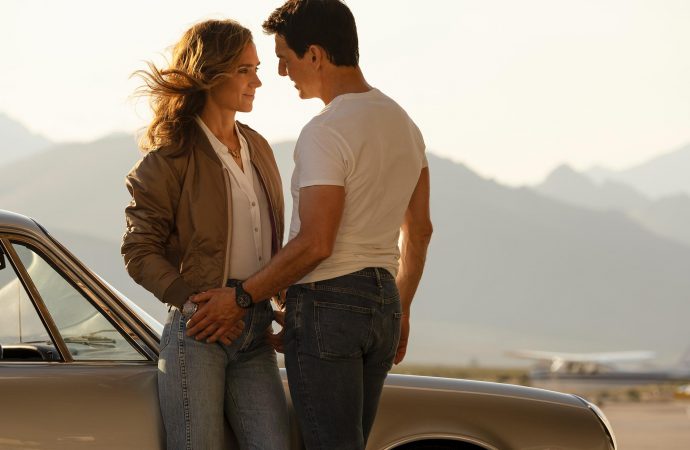 A review of sorts. **Spoilers** ahead.

Now that you’ve had PLENTY of time to see it, I want to point out a revelation about Top Gun: Maverick. Tom Cruise and Jennifer Connelly are electric. I know, it’s not a surprise at all and yet it still needs notice. They have NO previous history in this franchise and it has the breadth, depth, and will-they-won’t-they energy as any other full RomCom. This movie’s incredibly limited romantic story-line is SUPERB.

And it has a 96% Rotten Tomatoes score.

Did you notice that the love story isn’t even mentioned here in this synopsis?

1986’s Top Gun is KNOWN for it’s electric chemistry, literally chemistry between every moving thing on the screen. Top Gun harnesses all of the chemistry capability of Hollywood, such as the embodiment of peak Swayze, the original meaning of the song “Greased Lightning,” and a single strand of Brad Pitt’s Legends Of the Fall mane. Top Gun was the original hand book for men learning to woo a woman with intense grand gestures followed by no physical contact until a natural breaking point where their intended love interest leaps into intimacy. Top Gun was the blueprint for the male bonding movie hidden inside a traditional romantic storyline – something audiences LOVE to this day. But Top Gun: Maverick does not follow suit. There is not this intense chemistry filling every inch of the screen, the chemistry is concentrated on Jennifer Connelly’s soulful steady and understated presence.

So, let’s get down to one of the MOST intense sequence in this FIGHTER JET NAVY Movie: The moment Tom Cruise’s character jumps out of Jennifer Connelly’s bedroom window to escape being seen by her young teenage daughter, only to turn around and see said daughter, standing there and waiting for him through the window. They stare at each other with a deep intensity, he knows he’s been caught. She says, “Just don’t break her heart again.” And we are broken. I instantly cried. This movie about Fighter Jets is really a traditional love story with acts 1 and 2 in the distant past, well out of sight for the audience. This movie is entirely act 3 of their love story.

This movie is their chance at a life-long partnership they both deeply desire. There is nothing more beautiful than an adult love story, the simplicity of understanding life’s challenges, individual goals and aspirations, and respect for each other’s boundaries. They are both a little broken in their wonderful lives and they want to choose each other. And their chemistry is electric. Go re-watch this one and really pay attention to the depth of breadcrumbs laid out before us in the simplest of looks and phrases, they accomplish SO much exposition with compassion and delicacy. Modern studio cinema has disappointed me my entire adult life in the portrayals of cis heteronormative romance, undercutting women’s roles and showcasing deep disfunction as comedy instead of signs for couples therapy. I trust a brilliant test pilot who is hoping to find relevance in an ever-changing world and a business owner (and parent) who seeks to live life to the fullest. They are emotionally mature, responsible, role models. And they still need to find their footing, be responsive to each other’s needs, and make a commitment to their future.

But is this movie actually good? Through the franchise lens, I would say it hits it out of the park. As a stand-alone film, it has such a traditional movie feel that it wouldn’t likely be as beloved. I’m ok with that. I went to see Top Gun: Maverick instead of seeing a new story. I went because I LOVE the original Top Gun, not because I see every Tom Cruise release in theaters. I went for the fighter jets, the jeans, the chemistry, the Navy, and the nostalgia. But I couldn’t help but notice that the love story was often missing from write-ups. Perhaps if they ONLY wrote about the love story, the reviews may have been more positive.

From “‘Top Gun: Maverick’ Review: Will This Stuff Still Fly?” by A.O. Scott, (after a long bout of tearing down the film, finally-) “One advantage to the long gap between chapters is that the many credited screenwriters are free to fill in or leave blank as much as they want. In the last few decades, Pete has seen plenty of combat — Bosnia and Iraq are both mentioned — and pursued an on-and-off romance with Penny Benjamin (Jennifer Connelly). Now he finds her working at a bar near the base and an old spark rekindles. She has a teenage daughter (Lyliana Wray) — Maverick is not the dad — and a world-weary manner that matches Pete’s signature blend of cynicism and sentimentality.”

I want to point out a few things here… Jennifer Connelly’s character OWNS the bar (big difference), it’s not near the base, it is the official base hangout for the Navy. She is a staple in this community. She is well-known, established, and honored in that position by all who grace the screen. I point these out to illustrate that the love story doesn’t have a blip of interest to reviewers and is mishandled by the public, that’s not at all what was written into this movie. This love story was developed with care and… to be honest, a big dose of the “jeans gaze” (referring to a gender non-specific cinematic point-of-view, built upon the sexist “male gaze” when directors objectify women’s bodies like a fighter jet or a fast car or a sexy lamp). We stare at behinds in jeans for longer than expected, but I’m cool with it. It was not overly objectifying as it was good clean sexy fun for all genders.

From, “Top Gun: Maverick Finally Flies Onto Digital in a Week” By Eric Vilas-Boas, “

If you feel the need — the need to experience Top Gun: Maverick from the comfort of your couch, that is — you’re in luck. Tom Cruise’s latest record-breaking, sound-barrier-shattering death dream of a film is finally heading for a digital release on August 23, followed by a physical-media drop in early November. Folks who buy a digital copy will also get access to a fleet of bonus content: nearly two hours’ worth of behind-the-scenes footage, training clips, featurettes, and music videos (Cruise, fast airplanes, OneRepublic, and Lady Gaga are predictably all well represented in the proceedings). Folks who wait for the physical release can choose to own the film on 4K Ultra HD, Blu-Ray, and DVD on November 1. The discs should include all the same bonus stuff.

You may be wondering why it’s taken so long for Maverick to show up on any sort of home release — to say nothing of appearing on a streaming service, which has yet to be announced. Didn’t this movie come out in May? It sure did, but Cruise reportedly talked Paramount’s execs into a longer theatrical-release window than the 45-day stretch that has become common, and the rest was history: Top Gun: Maverick crested $1.355 billion in box-office receipts by early August. But with these releases, if you want to hit the skies again, you won’t have to buy another movie ticket. As Jon Hamm’s Vice-Admiral Beau “Cyclone” Simpson puts it: “Send ’em.””