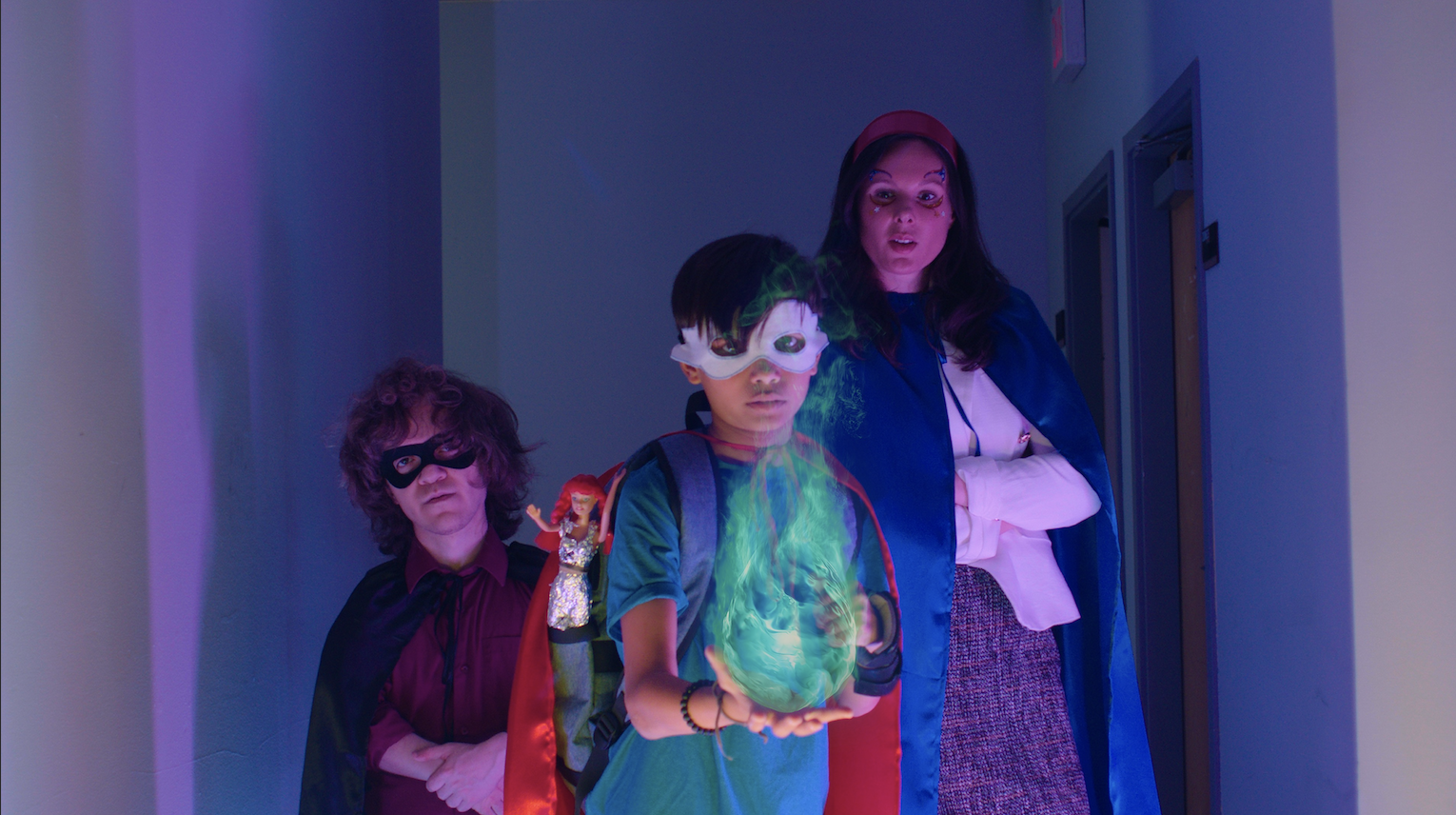 The Easterseals Disability Film Challenge is a filmmaking competition that provides a platform to amplify the voices of creators who live and work with disabilities. Over the course of six days, a short film must be written, shot, edited, scored, and submitted, and must adhere to guidelines announced shortly before the tight timeline begins: filmmakers

The Easterseals Disability Film Challenge is a filmmaking competition that provides a platform to amplify the voices of creators who live and work with disabilities. Over the course of six days, a short film must be written, shot, edited, scored, and submitted, and must adhere to guidelines announced shortly before the tight timeline begins: filmmakers must include at least one specific prop and location, must choose from a list of themes and must be within the required genre. 2022 has been the biggest year yet for the Challenge, topping last year’s record of 90 entries.

I caught up with Writer/Producer/Actress Rachel Handler and Co-Director Catriona Rubenis-Stevens on their new short film, Andy & Kaliope.

Rachel Handler became a part of the disability community after losing her leg in a car accident in 2012, two years before the Easterseals Disability Film Challenge began. The New York-based actress had primarily focused on working in theater, and had only recently added film and TV to her work after being cast in the film Smothered in 2013. During that time, Rachel had dabbled in writing, but had never completed a script. The Challenge provided an opportunity for her to push herself to finish a script – and an entire short film – in three days, as was the requirement at the time.

The push paid off, as she won Best Actor for her submission in 2014. She returned to the Challenge in 2017, and has been a part of it every year since. “I never missed another year. I was hooked,” Rachel says.

This year, Rachel returned with the short Andy & Kaliope, a short about a young boy in foster care who imagines himself and his caseworker to be superheroes battling his fear of moving to another new home. The story was, naturally inspired by the requirement for this years Challenge: to make a superhero film. “It’s such a cool genre and it gave me so much more freedom to think of story ideas because they didn’t specify that it had to be an action film. I thought it was such a cool prompt to work with.”

When the choices for theme were revealed in early April, Rachel immediately gravitated toward the theme of the “unsung hero.”

“As soon as I saw the theme of the unsung hero, I thought of social workers. I knew that I wanted to work with [lead actor] Jai (Ram Srinivasan) this year and I was going to craft the story for him as an actor, so I immediately thought of what it would be like if he was in foster care. A lot of superhero stories really come down to family. That all leant itself to a story of a kid being unsure of where his next home was going to be and letting that anxiety become the monster.”

As Rachel’s character tells the boy in the film, “[Superheroes] had to go through some pretty painful experiences to gain their powers.”

The film includes a few little-known statistics about the foster care system, most notably that between 30%-50% of children in foster care have a disability, and that the cost of medical care can be a deterrent for potential adoptive parents. “We wanted a happy ending for him, but I wanted to include those statistics at the end to show that it’s not always a happy ending,” Rachel explains.

Rachel has teamed up with Director Catriona Rubenis-Stevens for several Challenges, and Cat was eager to return for Andy & Kaliope.

“It is very important to me that I work as an ally continuing to do this challenge every year,” says Cat. “Disability is something that doesn’t discriminate and can happen to any one of us, and having lived with a temporary disability in my right leg and hip for several years, it hammers home the importance of doing this work, spreading awareness, striving to hire crew with disabilities and always casting authentically. I look forward to this Challenge every year now, and I love working with Rachel. We have a great shorthand with each other and both have the same passion for creating not just good work, but important work.”

Rather than co-direct with Cat, Rachel instead brought another co-director, Crystal Arnette, on board.

“Directing with Crystal was a wonderful experience this year,” Cat says of her directing partner. “She was editing this year, so it really helped speed things along and ensure that we only shot what we actually needed and didn’t waste time on unnecessary coverage. Luckily, because we both came on board before the filming began, we had time to discuss what we both wanted to achieve and how to divide responsibilities. I spent my time focusing on the art and actor side, and Crystal on the framing and lighting. It was a perfect balance.”

Andy & Kaliope was the first foray into acting in front of a camera for 11-year-old Jai Ram Srinivasan. Primarily an actor on the stage, Jai had recently played the role of Tiny Tim in A Christmas Carol on Broadway. “I’m thrilled that Broadway finally decided to cast an actor with a disability in that role,” says Rachel. “Cat and Crystal did such a nice job helping him understand how the camera works, and that you don’t have to speak so loudly to reach the back row.”

Last year’s submission, co-directed by Cat and Rachel, also featured a kid in its leading role. Rachel says, “I love giving the opportunity to child actors with disabilities because they are our future and I’m counting on them to keep the momentum going for inclusivity in the entertainment industry. The more experiences they get actually doing the work is so important for our future.”

Cat agrees, and has had opportunities to work with children on set many times over her career. “I absolutely adore directing and coaching the next generation of talent. I love their honesty in their work and their curiosity to how it is all done on set,” she says. “[Kids] respond incredibly well to relatable suggestions and simple actions or words to help them quickly connect to the script on the spot when we need to shoot immediately and don’t have the luxury of rehearsal time.”

“Let’s have them as involved as possible in this industry,” says Rachel. “I think having a kid on set brings so much energy and passion to the work. We need that kind of energy on a Challenge that is so fast paced where everyone is donating their time. There’s no money motivating us, there’s energy and passion.”

The enthusiasm shared not just by kids on set, but by the various teams of filmmakers in the EDFC community, shines a light on the progress that has been made in U.S. and the possibilities for the future ahead.

“I feel very protected by the Americans with Disabilities Act. It makes me so sad that there was a time when people with disabilities didn’t have that protection, where there wasn’t a [law] saying ‘your lives matter, your accessibility needs matter.’ I feel so fortunate to live in a time like right now,” says Rachel. The shift is an important one, considering how much has changed in a short amount of time. The ADA passed in 1990, and up until 1974, the U.S. had what was known as an “ugly law,” an ordinance that was mostly intended to keep homeless vagrants out of public view, but that unfairly targeted people with disabilities.

“Even in the past five years, there’s been so much growth toward inclusion and accessibility. In 2012 I was in the hospital and I didn’t know what a prosthetic leg looked like. A few years later, I was seeing a Dove commercial with a woman with a prosthetic leg,” says Rachel. “That’s also why I love including kids. We’ve come so far and these kids live in a time where they have protections through the ADA and things like the EDFC to help them see what their futures could look like. Their futures are not limited by their disability. If anything, I think my disability enhances my life. It has made me a more resilient and empathetic person, and these are all qualities employers should be looking for. Maybe my next film will be about disability employment.”