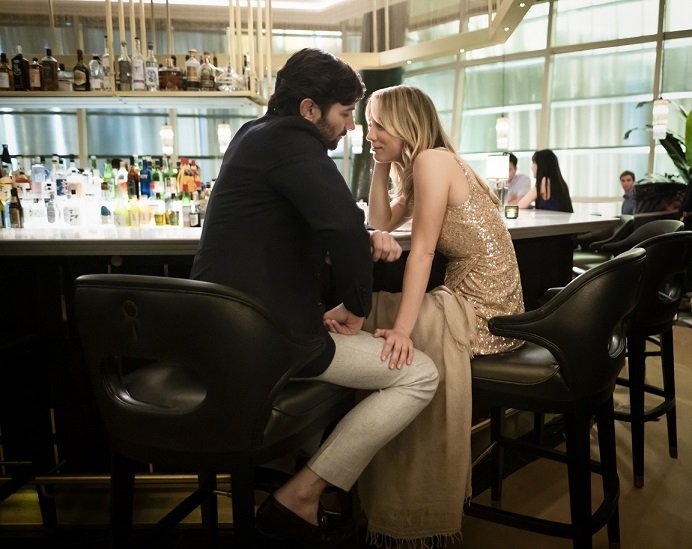 A reckless flight attendant with an alcoholism problem, wakes up in the wrong hotel, in the wrong bed, with a dead man – and no idea what happened. When questioned by FBI agents and still unable to piece the night together, she begins to wonder if she could be the killer. ***SPOILERS AHEAD***

I am disturbed by much of the struggles Cassie Bowden wiggles through in her drunken stupor, I am aghast at the messes she leaves everywhere she goes, I am uncomfortable watching men flock to this energy of intense vulnerability paired with self-destruction. However, I know this girl, I love her anyway. That’s what makes this show work, the perfect casting.

Kaley Cuoco/Cassie pulls off the impossible feat, she is woman repellent embodied to those of us who have internalized misogyny issues, but she is so real and I LOVE EVERY MINUTE OF HER JOURNEY. I can’t deny that I stuck with her because the storytelling elements that brought up her past in small bouts, it gave me extra wonder about why messes like this walk around literally knocking over sh*t in every single scene. I wanted to see more of her past. My interest sparked at those first flashes of young Cassie. What we don’t talk about it that alcoholism is not a gendered issue although its symptoms are often displayed differently. I tend to identify with Cassie’s particular struggles when I was a heavier drinker and many audience members may see a glimpse of Cassie in themselves or in their loved ones.

Kaley Cuoco is disarmingly relatable and has a great grasp of that line between inauthentic flirting and being a person enjoying the present. She walks the tightest lines until they require her to play the entire field of emotion to her breaking point. She finds the humor in those cracks as well. She is a master entertainer with the chops to back it up. No wonder she was nominated for a Golden Globe!

Zosia Mamet/Ani is a master at balancing her dry wit, her intense stare, and her command of a room all while continuing to become a tiny mouse when exposed to real trouble or the seriousness of triggering someone’s suicide. She is underutilized in her talents and I’m excited for a Season where she gets to handle more of the action. Her arc was magnificent and she’s a joy to watch.

Michelle Gomez/Miranda instantly gave me the impression that she wasn’t the killer. She kind of seemed like a joke for a bit there. I wasn’t really sure what to think of her, but she grew on me. I believed that she had begun to care for Cassie, something rather funny to watch her grapple with. Whereas I felt Colin Woodell/Buckley was the killer pretty early on. I didn’t know how, but his frequency and intensity felt in my gut like a huge red flag for sociopathy. Maybe it’s the female instincts in me, but I knew he was capable of murder once rejected. Is he playing his hand too hard? Or is he supposed to turn off Cassie for story reasons… I’ll have to bend the writer’s ear about that one day. Also, very hot sex.

Merle Dandridge/FBI Agent Kim Hammond was steady and believable is a comedic way. Her contentious relationship with her partner was indicative of what I enjoyed about every character-to-character relationship on this show. So much drama, frank corrections, and clear expression of awareness. Griffin Matthews/Shane takes the cake on this one, giving so many layers of good and bad feelings to every situation and person. Very confrontational, but in a way that feels like we can move past it and keep working together. I love the humor in characters just being authentic to each other about their boundaries.

Rosie Perez/Megan, Cassie’s flight attendant friend and wanna be spy, gives us a great peek into Season 2’s main or sub plot. We’ll just have to find out. I think there is a LOT more to unpack in Megan’s life and relationships. I cannot settle for the person she exposes herself to be in her breakdown with Cassie. There MUST be more, or else Rosie Perez is just that lovely to keep additional mystery behind her eyes – I know she is, so it’s not a surprise. Also… I believe she has a good sex life with that husband, I don’t want that to just go away, keep her SEXY in Season 2!

Scenes involving the flash backs of Jason Jones/Cassie’s father and Audrey Grace Marshall/young Cassie are heart wrenching. The casting is phenomenal. I cannot imagine a better personification of a f*** up father than Jason Jones’ Mr Bowden. He is wonderfully a mess in THE DETOUR and I cannot get enough of his wild antics. He used those powers for good to showcase the worst kind of alcoholic father imaginable. He also has this sparkle that Kaley Cuoco carries, something that makes you want to root for them despite their path of destruction. He is a talented actor and I hope to see him in the next Season.

Highlight of the show: Deniz Akdeniz/Max is wonderful. Fun, great energy, unexpected love of everything dangerous, generous companion, and has ALL the best scenes. Zosia Mamet/Ani and Deniz Akdeniz/Max scenes are just exquisite. And… they are pretty sexy too.