The Show We Need More Than Ever: Doc McStuffins, Humanizing Healthcare Workers And Discerning When To Seek Treatment 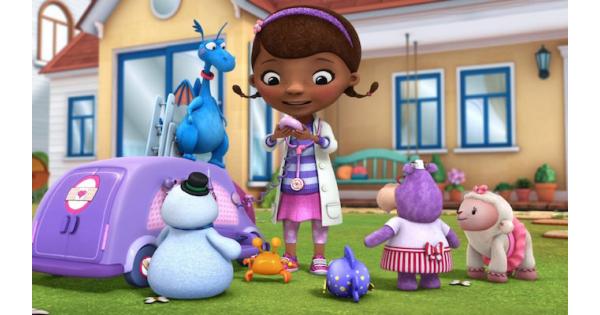 This show is so much more than a brief look into how to fix an ailment with a little love and care. This is a show about discerning the difference between a difficulty (or simple obstacle) and something where help is needed. This is a brilliant lesson for little humans. And grown-ups, too. This charming

This show is so much more than a brief look into how to fix an ailment with a little love and care. This is a show about discerning the difference between a difficulty (or simple obstacle) and something where help is needed. This is a brilliant lesson for little humans. And grown-ups, too.

This charming children’s television series ran for 5 seasons. But I’ve just now binged it with my kids and I gotta spread the word: This is the best Disney Junior show you can watch right now.

And now, more than ever, I am teaching my children how to trust and connect with medical professionals and listen to their advice. This isn’t a show that promotes a certain kind of big-pharma-propaganda or anything that might scare some readers. This show humanizes the person behind the charts and gives a glimpse into when an intervention is necessary.

Today, we are in the midst of a mid-stage global pandemic. My preschooler understands what is happening in a way that is age appropriate. But giving a voice to the medical community and humanizing those who want to care for your health and well-being is vital. This show turned the tide for us and how and when to heed a doctor’s advice!

But you may notice that this is a limited series… the show hasn’t had new episodes in a few years.

But WHY is Doc McStuffins gone?

From Indiewire’s ‘Doc McStuffins’ Changed Disney, Now Her Creator Is Coming for All of Kids TV:

“Aspiring TV writers, brace yourselves when you hear this: “Doc McStuffins” was the first show creator Chris Nee ever pitched. Thirteen years into a successful writing career in kids television, Nee sold her idea about a little girl doctor who “fixed” her toys to Disney. While the top brass “got it” right away, Nee says the first season of “Doc” was far from being considered “the high profile show in development.” Five seasons, two spinoffs, and a couple collaborations with Michelle Obama later, and “Doc McStuffins” is considered a Disney legacy project. Nee recently parted ways with Disney in 2018 to set up shop at Netflix, under a sweeping deal that positions her well on her way to becoming the Shonda Rhimes or Ryan Murphy of kids TV.

Animation is one of the few areas of entertainment that has not been slowed down by the challenges of social distancing, as long as talent is able to record high quality voiceover at home. That means Nee has hardly enjoyed any down time; she already has five shows greenlit just a year and a half into her Netflix tenure, and many more in various stages of development.

“Part of my deal at Netflix was always that I could build an empire if I wanted to,” Nee said during a recent phone interview. “One of the reasons I went with Netflix was I felt like they were doing the kind of buying into me as a person that seems to happen all the time for men and not often much for women. Which is like, ‘We believe in you, so come here and you can do whatever you want across any genre, just tell us what you want.’”

While she will always continue writing and creating her own shows, Nee is excited to step into a development role in order to open doors for new voices, something she’s been doing at her company for years. Part of her new deal insured Nee her own production company and development fund within Netflix, which will produce shows under the name Laughing Wild.

“Nobody else had given me the opportunity to have that kind of deal. Netflix was the place that very clearly listened to what I wanted, and it was a bigger dream than most people I have I think in the kids end of the business,” Nee said. “I say this with all humility, but the idea that the Shonda Rhimesian, Ryan Murphy sort of model could happen in the kids world.”

Nee has been working with women and people of color as soon as she had any hiring power, which she called “the real work.” While she praises the recent push towards inclusion, she can’t help but wonder what took so long for everyone else to catch up. “The real work for all of us is actually hiring people. It’s not the mentorship, it’s not the programs, it’s hiring people to do the jobs and give people the shows,” she said. “I can make the decision during the development process that a young woman of color has all the chops she needs to be a showrunner. She has all the vision, she has all the presence. She may not know all the institutional beats of putting a show on a screen in her bones the way that I do, but that’s what I’m there for.”

Though no one could have predicted “Doc” would become the phenomenon it is, the show gained popularity fairly quickly into its first season. Nee’s message of finding chosen family resonated widely, as well as the rarity of seeing a young black girl as a lead character, not to mention that her mother is an actual doctor. Still, it took longer for the visibility to include Nee’s own identity. Though she’s been out as gay her entire career, it wasn’t until a few seasons of success that she felt comfortable pitching Disney a same sex storyline.

In August 2017, Disney aired “The Emergency Plan,” which featured an interracial couple of lesbian moms voiced by none other than Wanda Sykes and Portia De Rossi. While Disney was always supportive of Nee and her family, proudly featuring her former partner and son in promotional campaigns, the company needed serious convincing to put a same sex couple on the air. “If you were gay when I was coming up, you were the last person to try gay content. You knew it was the third rail in kids tv, like you couldn’t go near it — at all. The first time I wrote a gay character was 20 some odd years into my career. And it was a hard battle to get Disney to do that. I had been told I couldn’t do it before that multiple times,” she said. “I said, ‘I’m constantly doing press, talking about how important it is to see yourself onscreen and what that means to kids, and yet I can’t talk about my own family. I just said ‘I’m done, we’re putting a same sex family on the air.’ And I was really strategic with it. I very specifically cast high profile people in those roles so they couldn’t chicken out.”

Watch this show with your little ones

Doc McStuffins helps us figure out so much about life and I mourn the fact that I won’t be able to share new episodes with my kids, but realizing that the creator moved onto new projects and a more supportive platform and still commits her grit and care for preschoolers brings me great joy. I cannot stress enough that if you haven’t watched this show with your kids and wasn’t going to since it had already been cancelled – consider that this legacy show is more relevant than ever and worth pulling up!