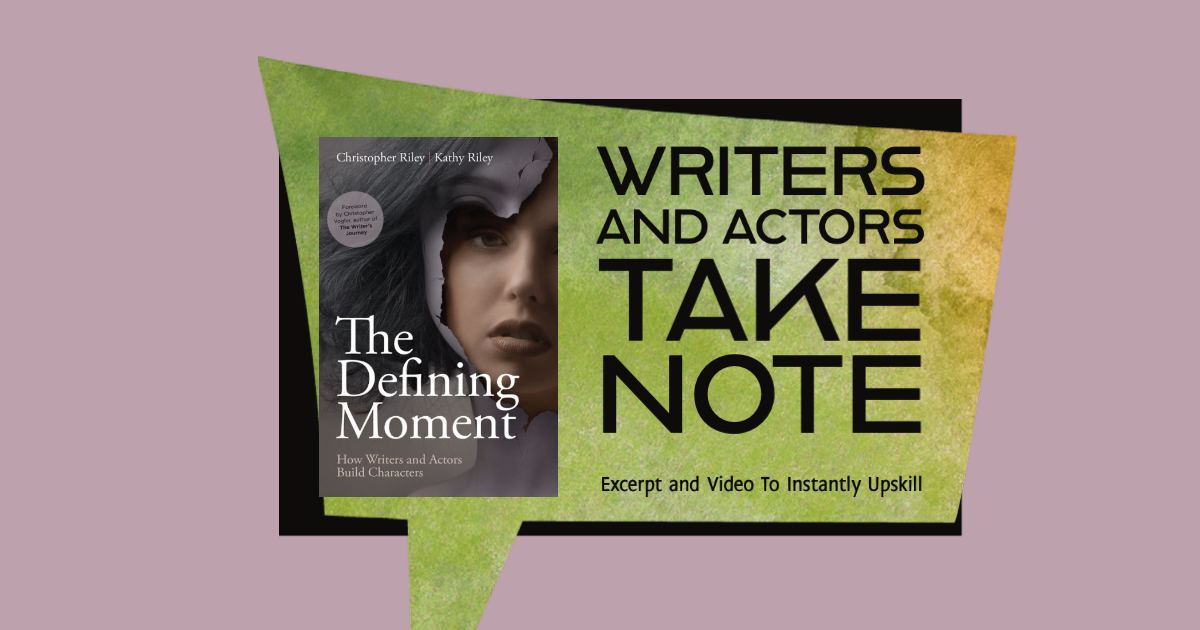 “The Defining Moment: How Writers And Actors Build Characters” has changed the way I write. Before the book had officially come out (so I could read more than a sample), I wrote about the book here: “Your Career Will Be Split Into Before And After You Read “The Defining Moment: How Writers and Actors Build Characters” and I knew it would be a great next-step to my well-rounded entertainment education, as a writer AND as an actor. Some of my favorite moments in this book asked me to sit back and catalogue, reflect, and apply what makes me ME. In the entertainment industry, there is often coaching/advice/talk of finding your unique voice – that’s the key to why you’re here and how to succeed on your own path. What the major messaging around that fails to do is offer an organized and simple workbook to help discover those elements of YOU. This book is for the brave.

The easiest thing to share about the book is the powerful examples from films like The Godfather, Finding Nemo, Titanic, Jojo Rabbit, The Lord Of The Rings trilogy, The Truman Show, and more. Even if you haven’t seen the film, the moments are described in detail to support the concepts outlined in the book. Not only is this easier for the reader to understand, it makes it easier to describe to my teams – my collaborators to whom I ran with joy to discuss all the new stuff I learned. Right after reading, I had been in a meeting to dissect and re-craft a moment in one of my current projects and I brought up a concept from this book using the very illustration the Riley’s showcased and as cinema is the common language of filmmakers, we were all able to discuss clearly, quickly, and find other cinematic examples to dissect how we did or did not want this moment to play out.

Building characters is more than the surface work, which I assume you already know. But showcasing what makes them deeply, full, rich, fascinating, (award-winning), and compelling human-like creatures lies in the building – often before the story is finished. The industry has relied on the talent of legendary performers to pick up the slack, to pick up where the writer hints and they are trained to fill in years and years of backwards walking, reflection, and secrets to bring 2-D into life. I was trained as an actor for years, I know where and how to find the bread-crumbs and begin the character journey. This book gives the writer, the actor, the director, and the whole team the tools to create a character that impacts the audience for a 90 minute film or a 10 Season show.

This isn’t hard work, it’s thoughtful and deeply reflective work (which can feel hard or wonderfully fulfilling and the best way to spend the next week). I’m an actor first, so this was an exciting personal experience. I filled a small notepad with notes and I re-opened two scripts for the next re-work/re-write within the week. You may do that too.

Beware, this book gives as much as you want it to. You’re in charge of your heart, it’s up to you to decide how far you’ll investigate. Be brave.

Excerpt from page 156, chapter “Enriching Your Storytelling with Defining Moments:”

Tony Hale told us about a recent experience voicing a character in an animated production, a boy defined by a traumatic past. “When I allowed myself to really think about this situation and what this boy had been through, and I did the line, you could tell that it was different. You could tell in the booth that it was different. Then you ask yourself, ‘Why am I not diving in more?’ and I think about those markers in a character’s life, when I do tap into them or I do really spend the time almost daydreaming about them, I think it does bring you too a deeper level of finding a character.”

Subtext, attitude, mood, emotional complexity, motivations, and choices can all flow from writers and actors armed with a knowledge of a character’s past defining moments – whether or not those moments are disclosed to the audience.