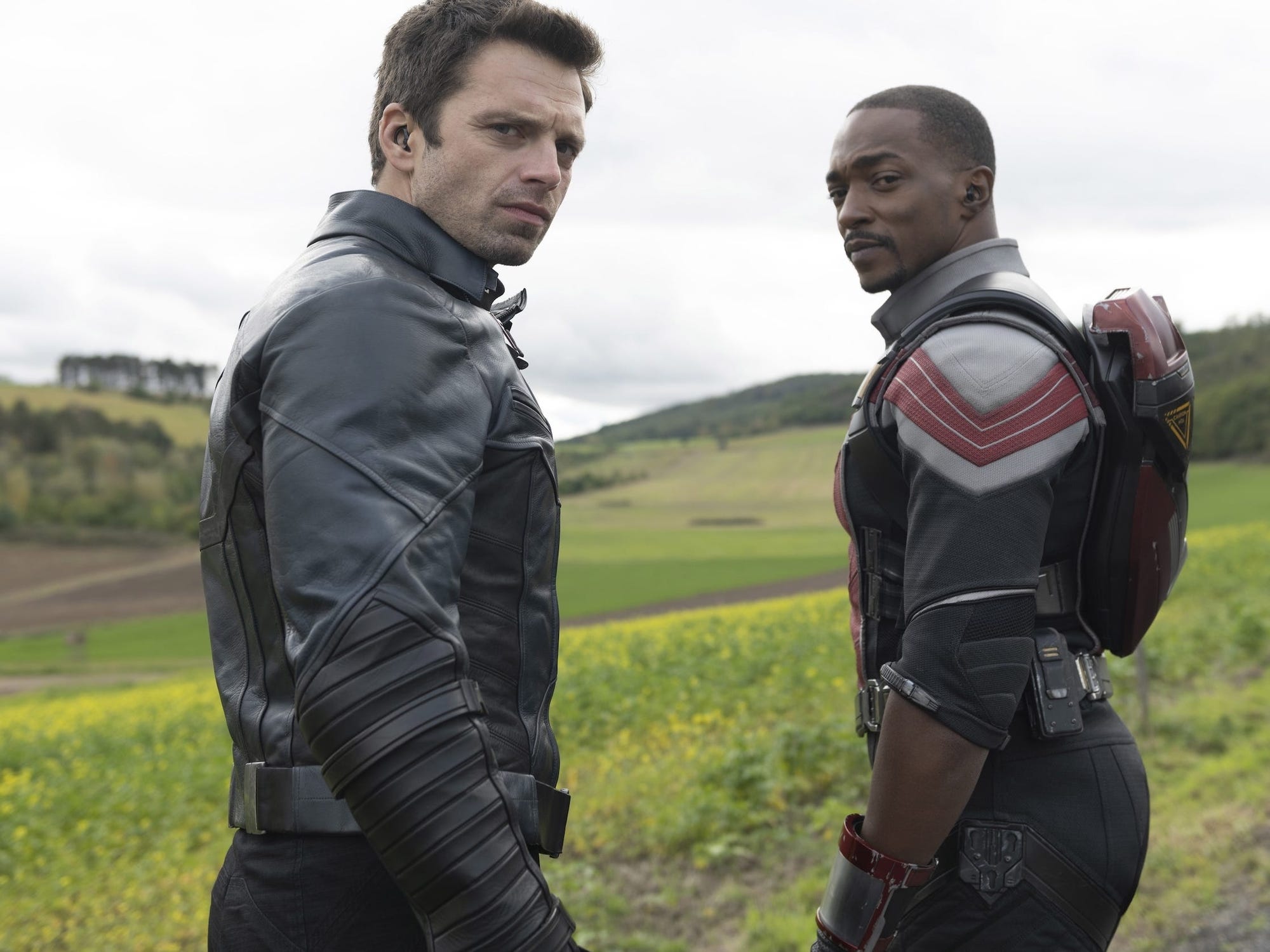 *Spoiler* filled commentary (barely a recap at all) after EPISODE 3 of The Falcon And The Winter Soldier. Promo for Episode 4.

I am so unsettled by Daniel Brühl‘s “Zemo” and it’s because his face makes me …uncomfortable. I don’t know if it’s the fact that his presence deeply irks me as a Nazi symbol or if I feel like his cold dead eyes make me uncomfortable as a woman. It doesn’t need to be said, but …I kinda feel like I’m not alone. This is likely stellar casting (Casting Director Sarah Finn) and fabulous acting, but I’m still betting many women are just as uneasy watching his character become a lead as I am.

At the end of episode 3, Florence Kasumba‘s “Ayo” lands in the alley way to bring word from Wakanda (Ayo is a member of the Dora Milaje, the female special forces team from Wakanda). They want Zemo. And Sebastian Stan‘s “Bucky Barnes” will have to make a decision. Bucky has gone to bat to keep King T’Chaka’s killer for their current investigation into the revived super soldier program and has done incredibly questionable things leading up until this point. We’re in for a wild ride depending on how far Bucky is willing to take this investigation and if he’s willing to pardon or send down river the used up Zemo (What Is Zemo The Baron Of?). Bucky has already made a deal with HIS very own devil. He’s already sold Sam on working with the devil. What will the White Wolf do?

Anthony Mackie‘s “Sam” has his own journey in episode 3, having already decided to play this dangerous game. Sam has a call back to his time embarrassingly performing for the bank employee in the first episode (Read more: FATWS’s Bank Scene Is A Harsh Dose Of Reality). As it’s brought up in this episode, he is, once again, jumping through these embarrassing hoops on the phone. Sam is crushed by his in-action regarding Emily VanCamp‘s “Sharon” and obviously wants to find his way back to where his personal line of good/evil lies. I’m REALLY pulling for Sam to have a breakthrough. I wanna see him take back that shield and make some SERIOUS moves.

Wyatt Russell‘s “John Walker/ new Captain America” is already cartoonishly evil, or is he just plain ol’ stereotypically American? Some sh*t is about to hit the fan in the coming episodes and we (the audience) will definitely be drawing parallels to our real American war conglomerate and the crushing of global revolutionary uprising efforts.

My son is confused on whether Erin Kellyman‘s “Karli Morgenthau” and her Flag Smahers crew is actually a bad guy or a good guy organization. Normally, I let my son know that bad guys and good guys are a movie tool, not reflective of real life (in real life, good people make bad decisions and people who can’t find the good in themselves are more often products of the traumas they’ve endured – people are just people and their actions are good or bad on a complicated scale of action/intent/influence). This is probably the first time I had a hard time explaining to my son that the only signifier in this series so far that the “bad guys” are bad is that they’ve killed innocent people on the way to doing good, but ….but ….arg, I don’t like saying this, but Karli saying

-as they burn up a building of innocent people, feels kinda true. Innocent people get hurt ALL THE TIME in the MCU, but these are actually bad guys, right? At any moment, I feel like the team could completely reframe. WandaVision trained me to distrust any commercial and the Global Repatriation Council (GRC) seems fishy since John Walker supports their efforts. So, maybe we’re gonna swing anti-GRC??

The theme for the series thus far has been: The ends justify the means. Alls Well That Ends Well is absolutely excusing making the deal with the devil. Captain America: Civil War verified that the MCU is happy with blurring the lines of what is right and what is wrong given the action/intent/influence as long as Steve Rogers is the North Star. But Sam isn’t stepping into Cap’s shoes and Bucky feels equally unworthy (Read more: Falcon Is The New Captain America, Bucky Is The New Steve Rogers). Even Sharon gave up the ghost of what culture believes to be right/wrong (Read more: Why Sharon Carter Wasn’t Pardoned After Civil War). Where do you think they are going with this?? Let me know @JennicaRenee