VIRTUAL EVENT (Tonight): The Queer “Sound” in Hollywood and Media By The Halp Network Entertainment Academy 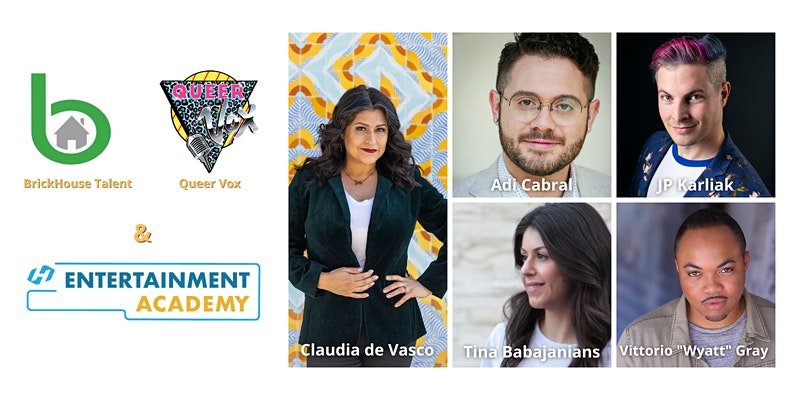 TONIGHT, Tuesday June 29 at 6:00 PM – 8:30 PM PDT, you can join Queer Vox, BrickHouse Talent, The Voice Stylist, and more discuss queer voices in the industry. This information was taken directly from their Eventbrite page HERE, where you can register and attend tonight! I first learned about this event HERE.

Join us for another amazing panel discussion and Q&A about The Queer “Sound” in Hollywood and Media. With incredible people from Queer Vox, BrickHouse Talent, The Voice Stylist, and more, this conversation will go deep into the heart of how we can protect diverse, queer voices in the industry and how to appropriately and authentically represent them.

Whether you’re a producer or director who works with queer talent, or queer talent yourself, you won’t want to miss out on this!

Adriano “Adi” Cabral (they/them) is a voice and dialect coach, actor, director, and intimacy director/coordinator. They are the coauthor of “Here’s How to Teach Voice and Communication Skills to Transgender Women,” a manualized approach to providing gender-affirming speech services. Adi is a certified teacher of Knight-Thompson Speechwork and Fitzmaurice Voicework, a certified Master Reiki Healer and Teacher, a cohort member of Intimacy Coordinators of Color, and a 200hr Yoga Teacher in training. They currently serve as Assistant Professor of Voice and Movement at the University of Nevada, Reno where their research focuses on training methods for the LGBTQ+ Identified actor. For more information, please visit www.adriano-cabral.com.

Claudia de Vasco is the Head of Cultural Integrity at BrickHouse Talent, a new division representing Hollywood accent and dialect coaches, cultural consultants, narrative translators, and introducing Culture and Inclusivity Coordinators as a new role in the industry, to support inclusion and diversity efforts. Previously she was a Dialect Coach for over 15 years, coaching theatre and TV/Film. She’s coached actors such as Antonio Banderas, Juliette Binoche, John Malkovich, America Ferrera, Liam Hemsworth, Alicia Braga, Raquel Welch, Kit Harrington, among others. She is the former Head of Speech at the Stella Adler Academy in LA. She has been a guest speaker and/or director at University of Texas, CalState Northridge, USC, and SAG/AFTRA. Claudia has also had a career as a TV/film actress (Gilmore Girls, Jane the Virgin), Stage actress (San Diego Rep, Independent Shakespeare, MixedBlood, Disneyland Parks), theatre director and producer, and arts activist & leader. She is a current member of The Kilroys, and serves as the Managing Director of Emerging Arts Leaders/Los Angeles – a non-profit inspiring and mentoring the next generation of arts sector leaders. Claudia has had a parallel career in Government and Politics, having organized two political campaigns, including Obama for America in PA, and has served as an elected leader on her local Neighborhood Council. She graduated Summa Cum Laude, from the University of Minnesota/Guthrie Theatre Actor Training Program, and served as her college’s Valedictorian. She is the recipient of the Playwright’s Center Jerome Foundation Many Voices Fellowship in 2005. Claudia is a proud Tejana, daughter of Mexican Immigrants, mother of two, and wife. On her spare time she sings and plays her ukulele, practices calligraphy, and makes pottery.

Voiceover actor, writer, and snappy dresser, JP is the voice of Boss Baby in The Boss Baby: Back in Business and Dante Crescendo in Trollstopia. He has played such iconic characters as Wile E. Coyote, the Tin Man, Willy Wonka, Kozo Fuyutsuki in the Netflix dub of Neon Genesis Evangelion, and a slew of Marvel heroes and villains including Loki, the Vision, Hawkeye, Wiccan, and even Black Cat. On the interactive side, notable credits include N. Tropy in Crash Bandicoot 4, an Imperial Fury Pilot in Star Wars: Squadrons, and Wolfgang in the Skylanders series. JP is also an advocate for LGBTQ+ representation–both on-screen and behind the mic–founding the Queer Vox training academy in 2021. He and VO pal Courtenay Taylor are co-founders of the non-partisan organization NerdsVote, linking cosplayers, gamers, con-goers, and pop culture fans of all kinds to voter registration opportunities.

Tina Babajanians, MS CCC – SLP is a gender affirming voice and communication coach. Her work is focused on walking alongside folks as they discover a voice that is empowering and authentic to their identity. Creativity and clinical expertise allow for the individual to explore voice safely and effectively.

Vittorio “Wyatt” Gray is a writer, producer, director, and voice over artist with over 17 years in the industry. He is the voice of Donnie Do on “Jason Vlogs and The Do Crew”, a brand new animated TV series created by Albie Hecht (former president of Nickelodeon) and Pocket Watch Studios (Ryan’s Mystery Playdate, Hobbykids Adventures) in which he plays the animated lead. He is also producing and directing his first feature length film, “Miracle: The Milagro In Tafticopa”, a faith based, inclusive, inspirational film that is currently in post-production. Notably, he has been seen as a regular performer for BuzzFeed, as well as on “Through The Wormhole With Morgan Freeman”(Discovery/Science Channel), and as the narrator alongside Alexandra Billings in Rhys Ernst’s series “We’ve Been Around”(Focus Features). He enjoys any opportunity to give back to the community, educate the masses on Trans and LGBT matters, and work on his passions.

Classes, workshops, and webinars by The Halp Network, LLC. are recorded for archival purposes. Free events may be posted to our social media channels at a later date. Students of a paid course may receive access to the recording of their class for the student’s own use ONLY.

Do you want to learn more?

Who is The Halp Network Entertainment Academy?

The Halp Network is a trusted network of creative entertainment professionals and small businesses.   We lauched the Entertainment Academy to provide hands-on experience for folks looking to grow their skills in a practical fashion within the rapidly changing world of entertainment.

THNEA workshops are taught by working professionals and designed to advance and elevate the entertainment industry and those involved in it. In a collaborative and engaging environment, come learn something new and share what you know.

Who is Brickhouse Talent?

Who is Queer Vox?