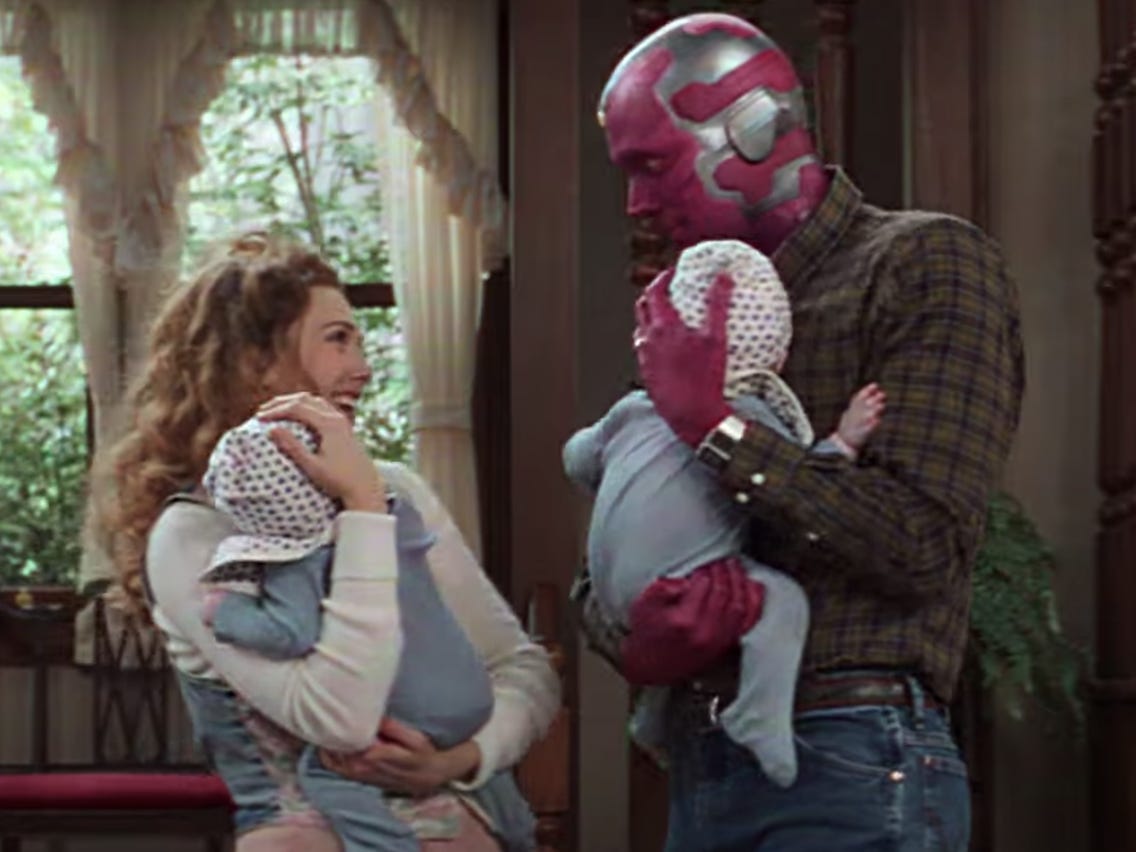 **Spoilers Ahead**
No, seriously, tons of spoilers. Go away until you’re caught up on episode 5. I said 5! Go check and make sure. The 80’s one. That’s right. Ok, you can enter now.

Seriously, there are spoilers ahead. You were warned.

Reading tons of online articles will give you a thrill if you’re into MCU and production company chess:

“The Pietro who arrives at the door in this episode is played by Evan Peters, whom you might remember as the version of the character in the last few X-Men movies — Days of Future Past, Apocalypse and Dark Phoenix. These weren’t set in the MCU, since 21st Century Fox had the cinematic rights to the X-Men characters.”

But I’m much more enthralled in the people presently on the screen and I like to wait to be served. Early in this show’s run, my social feed was filled with loud almost annoyed fans wondering what and how this would pay off. I was happy to enjoy a huge risky swing. I had almost immediately felt that Wanda (Elizabeth Olsen) had created a world for herself from the best comfort blanket: Nostalgic TV. I never wondered about her accent or had issues with the time spent on really matching the homage style of storytelling to the period. I bet those actors were jazzed every script reading, ready to have a good reason to dig into golden TV classics.

So, let’s talk about Pietro. SHE DIDN’T KNOW HE WAS COMING. That means this comfort biodome is taking on a life of its own similarly to how Wanda was pretty confused in the beginning. She may just be snuggling back into TV Land, OR she may be out of control. Neo Pietro and American TV Wanda don’t really have the same relationship as Pietro and Wanda back in the AGE OF ULTRON, so I’m concerned for how that will play out — with Vision (Paul Bettany) in the mix too. Earlier in the episode Agnes (Kathryn Hahn) asked Wanda if she COULD bring people back to life, then Wanda did take a beat there to consider it. This may have all been set in motion by that simple ask. Especially since we know that Wanda brought Vision back… but we still don’t know HOW that happened.

Pietro’s entrance is a twist, but Vision’s self-awareness is a huge breakthrough already for this episode. The team on the outside threw a ton of new twists our way, I feel like rewatching this particular episode might be the best way to catch all those tiny details in the cinematic universe, ya know, if that’s yo thang.

Let’s take one more minute to recognize that Wanda is learning within her own creation. She takes the classic TV female journey and balances marriage in the 50’s, figures out who she is in community in the 60’s (hello pants, Wanda!), she leans on ‘the village’ figuring out family and deeper marriage issues in the 70’s, she learns about grief and the bigger picture in the 80’s, and I think they may tackle some social issues in the 90’s coming up (I think most multi-cam comedies like these end up stunted in the 90’s, so we’re dropping that style soon). She’s growing and allowing herself to break down a bit more each week. But, I hope they don’t break this spell and take the witch from her castle. Oh please, let their be more nostalgic TV!

Predictions for next week:

Riddles still to be solved:

What are YOUR predictions or what other mysteries were set in motion in this episode? Send to @JennicaRenee on IG